Skip to content
You are here
Home > Recommended > SailGP: Fletcher and Bithell on stepping up from the 49er 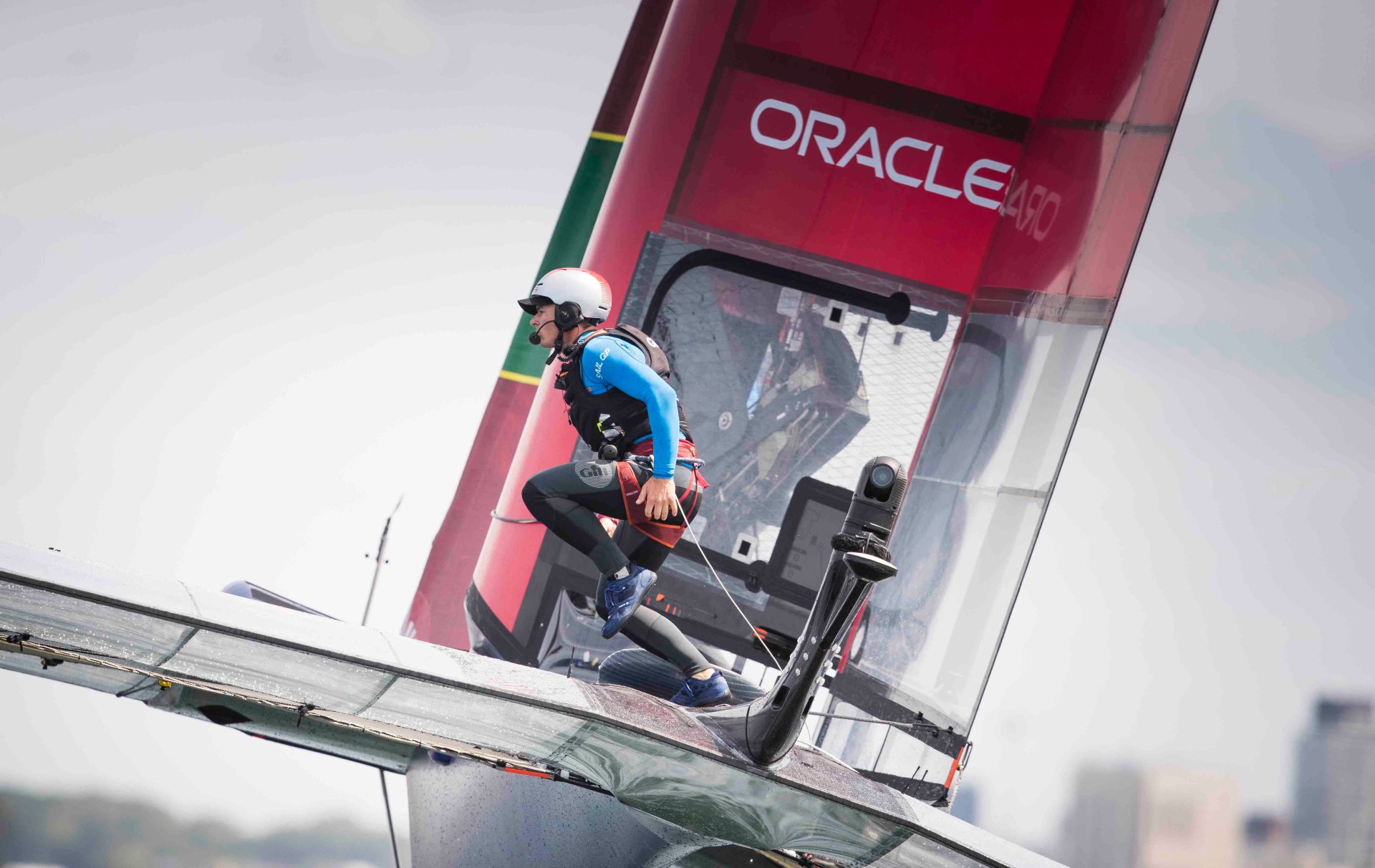 When it comes to steep learning curves, they don’t come much steeper than the one that British 49er Olympic hopeful Dylan Fletcher finds himself on since taking on the role of helmsman aboard the British SailGP F50 catamaran for the global circuit’s inaugural season.

Fletcher and his friend and crewmate Stuart Bithell are one of the top 49er teams in the world. They were crowned 49er world champions in 2017 and have set their sights set firmly on representing Great Britain in the class at the Tokyo 2020 Olympic Games.

Although securing the opportunity for a tilt at Olympic gold remains the pair’s absolute number one goal, when SailGP CEO Russell Coutts called Fletcher last year to ask if they would be interested in racing for the British team they did not hesitate for very long before saying yes.

“We um’d and ah’d at times and we had some difficult conversations and had to reassure the RYA management that we would be able to deliver on our promise in the Olympic campaign,” recalled Fletcher on a recent episode of the Yacht Racing Podcast.

In February of this year after not very many hours of training the British team – skippered by 49er Olympic medallist and America’s Cup veteran (Luna Rossa and SoftBank Team Japan) – turned in an if not elegant, at least creditable performance to claim third place at the series’ opening event in Sydney, Australia. “It’s just been a fantastic experience being on that learning curve,” said Fletcher. “Sailing with Chris Draper and sailing against some of the best sailors in the world, means you’re just constantly learning.”

Despite dinghy sailing up to 300 days per year on their Olympic campaign Fletcher and Bithell say that joining the SailGP circuit has been a monumental step up for both of them.

As helmsman though, Fletcher perhaps feels this most – especially given the F50 is far and away the biggest boat he has ever steered.

“To put it into perspective, I’d never helmed or raced or skippered a boat anything other than a 49-er or a Moth,” he said. “I hadn’t raced a TP52, I hadn’t helmed a Melges 24 or even a J70. Literally none of that – I’d just concentrated on Olympic sailing and a bit of Moth sailing thrown in.

“I’ll never forget when we were in New Zealand for training and day one Chris asks me to direct everyone with I want them to do get the boat off the dock. So I’ve got this 50-foot eight-million-dollar catamaran and this small exit out of the harbour we’re in. And I am thinking to myself ‘I don’t know what I’m doing!’”

Fortunately, Chris was good and he held my hand a bit and helped me with it. It’s like with anything, you grow into it, and now we’ve got confidence. We know what we’re doing most of the time!”

For Fletcher too the switch from dangling from a trapeze wire with a gennaker sheet in his hand, to flight controlling the F50 via array of buttons and a joystick was another quantum shift.

“A huge step,” he recalls. “There’s no doubt that the few years I’ve done Mothing has been a massive help, just getting some foiling experience and learning how foils work and stuff. But the team around us has made the learning easy. There’s still a hell of a lot to learn, but I’m starting to know what all the buttons mean!”

“Currently the boats are set up in a way where it’s much easier for the helmsman to do fly the boat from the twist-grip on the steering wheel. So actually in our boat at the minute, Dylan is primarily the flight controller until it comes to manoeuvre and then obviously I get involved with the joystick.”

As Fletcher points out, the move to the F50 from the 49er has meant a reversal in the way the two sailors interact with each other on board.

“It’s a big change, he says. “In the 49er Stu makes the boat go fast and I make the decisions (Obviously we have plenty of conversations and help each other out where needed). Whereas in the 50 it’s the flip side where I’m steering and trying to make the boat go fast, and Stu is telling me where to go.

“Although it’s the other way around from the 49er, the comms are pretty much the same which means we can bring a bit of our existing team work into it – something that we’re very strong with. and

“Stu has done an amazing job of picking up this different style of racing and judging things – particularly when the boats are going this fast. It is full-on when you’re trying to pull a cross in these eight-million-dollar race boats. There’s a bit higher consequence, you know?

Fletcher too has got to grips pretty quickly with driving a 50-foot flying catamaran. His first experience with making an F50 fly came only in December last year during an introductory training session in Auckland, New Zealand.

“It’s quite funny to look back at that now,” he said. “When we sailed out of the harbour it was quite narrow and we were literally sailed out the harbor and we were taking it very safe and slow.

“Then the call came to pop it up on the foils and I remember thinking ‘Yeah, I’ll just twist this grip and I expect the boat’s going to lift out of the water and then I’ll just hope that my brain knows what to do’.

Since then the process of steering the boat at speed has become more and more instinctive to Fletcher but he admits there are still times when his brain and his hands don’t work fully in synch.

Both the British sailors say the experience of sailing an F50s flat out is hard to describe.

It’s an incredible feeling, these boats are amazing,” Fletcher said. “Thirty knots doesn’t feel that bad or that fast, but then when you get to 40 and 45 it starts getting full noise, you know?” So far the British team’s top speed has been 46 knots (53 miles per hour/85 kilometers per hour).

“That was in 15 knots of wind and we were trying to take it easy!” said Bithell.

After a few days of those sort of speeds when the pair jump back on their 49er – hardly a slouch of a ride – things seem to be happening in slow motion.

“We were sailing in the other day in Weymouth, it was blowing 20 or 25 knots and we had a big skid out,” Fletcher said. “We got hit by a massive gust and got rounded up when we were going as quick as a 49er ever goes. We nearly capsized but we were just laughing about it because we were so relaxed at speed.”

Fletcher draws a parallel with the free climber Alex Honnold whose documentary video about scaling the sheer face of the El Capitan mountain in Yosemite National Park he had watched the previous night.

“He’s got no fear, you know? You just see him so calculated because fear isn’t getting in the way of what he’s doing. He free solos the whole thing, 3000 feet and it is just mind-boggling. They did an MRI on his brain you know and basically the fear part of his brain pretty much just doesn’t fire. He needs a massive stimulus before it does.”

Rather than raw speed, the difference between the British crew and the top two more experienced SailGP teams in the opening regatta on Sydney Harbour was more down to boat handling and finesse.

However Fletcher believes they and the other teams will catch up quickly as the season progresses.

“All the data off all the boats is available to everyone,” he says. “That is really accelerating the newer teams’ learning. So it will be very soon it will be a matter of who’s the best sailors? Which is the best nation? Who’s sailing the best on that day?

Interestingly the Brits didn’t have a data analyst on the team in Sydney.

“That was just due to the nature of budget and what we felt was important,” Fletcher explains. “But going forward we will do and I think that you see things on the data that you can make improvements from. Like ‘Oh look there, the Japanese are trying this’ or ‘the Aussies are doing this differently.’

“I think it is huge that they can’t go and do something without us seeing it. Like, if they’re using a different drop mode, we know about it, you know? We’ve got a huge list of things that the next time, when we go to San Francisco we’re going to be doing differently, because the top two boats are doing it like that.

“The opportunity is there to get better quickly and that’s what’s going to make this season so exciting to be a part of.”