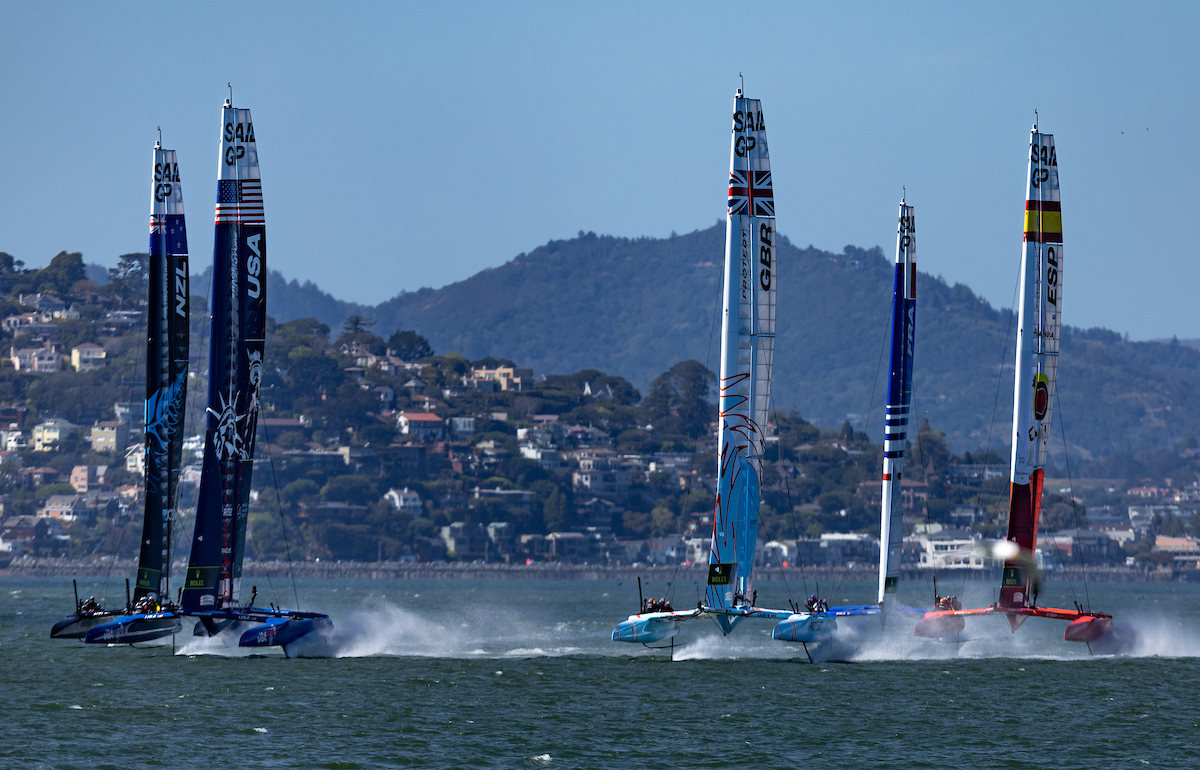 The SailGP bandwagon rolled into San Francisco a week ago and is now in full effect on the eve of the international high-performance regatta circuit’s two-day Season 2 finale along the city’s waterfront this weekend.

The eight international professional crews representing Australia, Denmark, France, Great Britain, Japan, Spain, United States, and New Zealand have been putting in long days on San Francisco Bay for the last week have experienced a range of conditions from blue skies and sunshine to cold and damp low hanging fog.

The one constant has been the breeze which has built steadily each day into the mid teens by the late afternoon. That has made for some spectacular viewing for the local dog-walkers on Chrissy Field, and for the members of the St. Francis Yacht Club outside whose well appointed balconies this weekend’s racing will be run close to shore.

San Francisco Bay’s strong currents and funnelled breeze have earned it a fearsome reputation as a regatta venue for any kind of sailboat and the professional crews of the foiling F50 catamarans have been tested to the limit – and, at times, beyond.

Two big money prizes are up for grabs over the weekend.

All eight teams are in the running for a three hundred thousand US dollar cash prize for winning the five-race San Francisco event. But only three teams will line up for the final winner-takes-all one million US Dollar shoot-out on Sunday afternoon.

Going into the event, based on their scores both Tom Sligsby’s Australian team and Jimmy Spithill’s United States outfit are assured a place in the million dollar final – providing they make it through the preliminary races intact.

However, given that both these top two teams have capsized during training this week – the only two teams to do so – nothing can be taken for granted.

The American wipe out happened on Monday and was a comparatively benign affair by SailGP standards caused by water ingress to the electronics controlling the boat’s hydraulic systems. This prevented the gigantic wing from articulating during a manoeuvre and this caused the capsize. The American chase boat team were quickly on the scene and the boat was upright again within minutes with minimal damage.

In contrast, the Australian capsize took place at the end of a long training on Thursday and was a considerably more spectacular damaging affair. The team were on their final run of the day before heading home when they pitch poled their F50 causing severe damage to the top of the complex wing sail.

Slingsby’s support crew and the shared SailGP tech team have been working flat out on repairs ever since, but the boat will not be ready for today’s day of practice racing.

The American’s and the Australians were both fortunate to have avoided what would likely have been a catastrophic collision during training on Wednesday when a communication error between Slingsby and crew member Kinley Fowler resulted in the Australian boat avoiding t-boning the American F50 by a matter of feet.

Meanwhile, Nathan Outteridge’s Japanese team need only to avoid wiping out on Saturday to secure the third spot in the million dollar final. Outteridge has looked slick and assured during training and is clearly not phased by the prospect of a three-way dog-fight with Slingsby and Spithill.

Cut and thrust at the press conference

By sailing standards, today’s skippers’ (or drivers’ – as SailGP would have me say) press conference was a refreshingly lively affair with plenty of needle and banter between the sailors – particularly the three Australians: Spithill, Slingsby and Outteridge.

Spithill was in bullish form. Well known for using the media to try to get inside his rival skippers’ minds he wasted no time in trying to paint his team as the underdogs and Slingsby and Outteridge as the clear favourites.

“I would have thought you media would have done some homework, but I will do it for you,” he said.

“Tom is the reigning champion, so you cash start there. Then, Nathan was also in the final last time and to be honest he had the million dollars in his hand but it slipped through and Tom got past. That’s why I believe these two are favourites – and they have done more time than anyone else in these boats.”

Spithill went on to list the catalogue of woes that have befallen his team in its first season: a last place in their first event after a port and starboard crash with Japan, rudder damage at another event, and a string of other similar calamities besides.

Slingsby – who had been rolling his eyes through most of all Spithill’s comments – responded by saying: “I feel like we need a violin playing every time he tells us how hard done to he is.”

“I prefer to be in the position of favourite,” Slingsby went on. “The reason we are favourite is because we have proven we can perform under pressure time and time again and I wouldn’t trade our position for anyone else’s.”

Spithill had played down the impact of his capsize by claiming it was good to have it happen in training rather than racing. Slingsby, however, admitted that sustaining serious damage on the final training day and missing today’s practice races was far from ideal.

“We have analysed the data and we are going to be better off in that situation,” he said, “But we have created a hell of a lot of work for a lot of people and putting the team in this position is not something I am proud of.

“It is unfortunate to be missing practice racing. We have been here training all week but mainly by ourselves and we haven’t done much with other teams – and definitely not on the start line.”

While the Australian shore team sweats over the wing repair, Slingsby said he and the sailors would be watching the practice racing and studying the footage to try and learn from the mistakes of the other teams.

For his part, Outteridge revealed that the Japanese crew had made changes to its lineup over the season in an effort to improve its performance in the heavier air expected in San Francisco this weekend.

“We needed to get a bit heavier as an overall crew weight,” he explained. We started off this season in the lighter weight category and that means you end up carrying corrector weights – so you have lead on the boat to try to get the righting moment to be the same.

“We were also probably lacking a bit of power on the handles from the grinders, so we have got a couple of stronger grinders at the front and put Leo Takahashi into the flight controller role. He’s been relearning his role but that extra 30 kilos of crew weight seems to have made a difference to our straight line performance.

Race 1
The opening heat was all about Ben Ainslie’s British crew who led from the off after nailing the favoured leeward end of the line and blitzing across the first power reach. Some slick gybes on the first run saw the Brits extend their lead at the first leeward gate ahead of Nicolai Sehested’s Danish squad and Quentin Delapierre’s French crew.

Anislie’s men latched into a significant left hand shift on the first upwind leg and rounded the windward gate 30 seconds clear of the fleet. From there on in they didn’t put a foot wrong and took the race win by a huge margin of around 40 seconds ahead of the Danish in second and the French in third.

Race 2
Ainslie won the start in the second too and led around the first turning mark by a couple of boat lengths from Spithill on the USA boat. An apparent boat speed deficit by the Americans saw them fade from contention at the end of the first lap leaving Peter Burling’s New Zealand crew and Delapeirre’s French crew battling it out in second and third.

The British were extending even more on the second downwind leg when the race was abandoned after a whale was spotted on the racecourse.

Race 3
The third and final race of the day was an absolute cracker which saw the French boat win the start from the windward side of the pack to lead at the turn mark from the British who had once again started at the leeward end. Ainslie snatched the lead at the leeward gate when he dived inside Delapierre to make the turn ahead.

Early on the first beat there was a three way scrap between GBR, Japan and FRA, but the leg ended with Peter Burling’s New Zealand rolling past the British boat as it struggled around the buoy after Ainslie tacked under-cooked the final layline.

The fierce match race between the Kiwis and the Brits continued to rage down the second run and the final upwind with Burling’s team holding their nerve to lead around the windward mark and take the win.