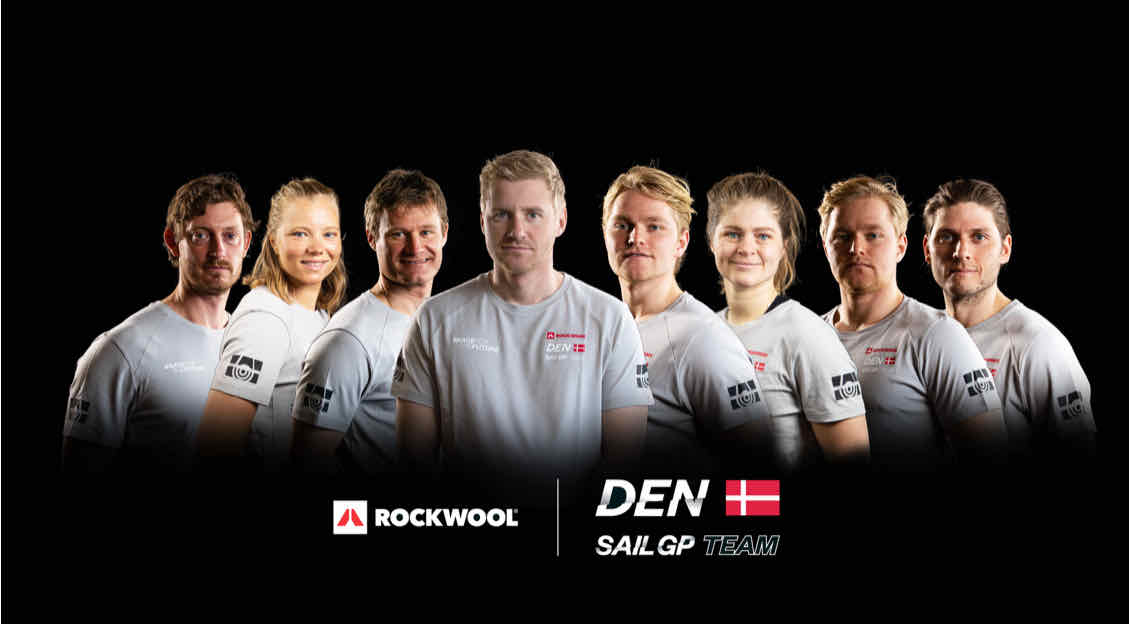 Denmark SailGP Team presented by Rockwool has revealed the crew that will race in Season 2 of SailGP – including two Danish female athletes, who bring additional Olympic experience to the team.

At a press conference this morning, Danish helm Nicolai Sehested revealed an all-star crew consisting of Olympic medallists, world champions and round-the-world racers who will fly the Danish flag in the global racing league in 2021-22.

Sehested confirmed that he will once again be joined by Rasmus Køstner, Martin Kirketerp, brothers Hans-Christian Rosendahl and Lars-Peter Rosendahl, and Tom Johnson in Season 2. Hailing from Perth, Australia, but currently living in Denmark, Johnson is the only international member of a majority Danish crew.

And Sehested announced that the roster will also feature Danish Olympic medallists Anne-Marie Rindom and Katja Salskov-Iversen, the two successful candidates who will be immersed with the team during the Bermuda Sail Grand Prix following the Denmark SailGP Team female selection camp.

Rindom is a two-time World Championship winner and the 2019 World Sailor of the Year, who competes in the Laser Radial class. She won a bronze medal at Rio 2016, and is currently preparing to race at Tokyo Olympics later this year.

And, Salskov-Iversen, who raced in the Olympic 49erFX class alongside Jena-Mai Hansen, and also took home a bronze medal from Brazil, a year before winning the World Championships in 2017.

The initial phase of SailGP’s female development programme consisted a selection camp in Quiberon, France, in February 2021 – and the next stage will see Rindom and Salskov-Iversen immersed in the team for the opening Grand Prix in Bermuda.

Following the opening event, at least one of the athletes will be selected to join Denmark SailGP Team for the rest of SailGP Season 2.

‘A team that Denmark can be proud of’

“I’m delighted with the level of talent, experience and skill we have in this team – but also the energy and the culture we have within the group,” said Sehested.

“We have spent the last 12 months since the Sydney event, where we made our SailGP debut, working hard and developing as a team, and we are in a much stronger place than we were going into that event. We are confident and looking to surprise a few people this season. This is truly a team that the whole of Denmark can be proud of.”

On Rindom and Salskov-Iversen, he added: “Both Anne-Marie and Katja have impressed us during this first phase of the selection process and they bring new skills and experience to the team. They are both different personalities, but they share common ground racing at the Olympics, and that gives them a strong mentality, valuable experience racing at the top of the sport, and a sharp focus on elite performance.”

“Racing as part of a team, in these foiling, supercharged boats, is very new to them, but we welcome them to the team and we’re looking forward to helping them develop their experience and skillsets in Bermuda, and beyond.”

The eight-strong crew will depart for Bermuda at the end of this month, before embarking on some pre-season training in the F50 ahead of the season opener.

Rindom, who will combine her Olympic campaign with the commitment to Denmark SailGP Team, said: “When I was offered the opportunity to be part of this team, I didn’t hesitate to say ‘yes’ because it’s an exciting and new challenge.

“Competing in a single-handed Olympic class means that I spend a lot of time focused on my own performance, but to be a part of a fantastic team like Denmark SailGP Team is a completely different game compared to anything I have done previously in my career. I know it will be a steep learning curve but I’m really looking forward to developing my skills and getting involved in Bermuda.”

All eyes on Aarhus

On August 20-21, the Rockwool Denmark Sail Grand Prix in Aarhus will see the Danish team race in a homecoming event for the first time.

Denmark SailGP Team’s Martin Kirketerp, who grew up in Aarhus and went on to win gold for Denmark at the 2008 Beijing Olympic Games, explained what it means to the city to welcome the SailGP boats into Danish waters.

“To host world-class racing like SailGP is absolutely huge for Aarhus,” he said. “Over the past few years, the city has positioned itself as one of Europe’s top sailing destinations, and these events prove that the world is taking notice. The Sailing Centre is second to none and will be a great home for the world’s best sailors in August. I think the Rockwool Denmark Sail Grand Prix in Aarhus will be a fantastic event for Danish sport as a whole.”