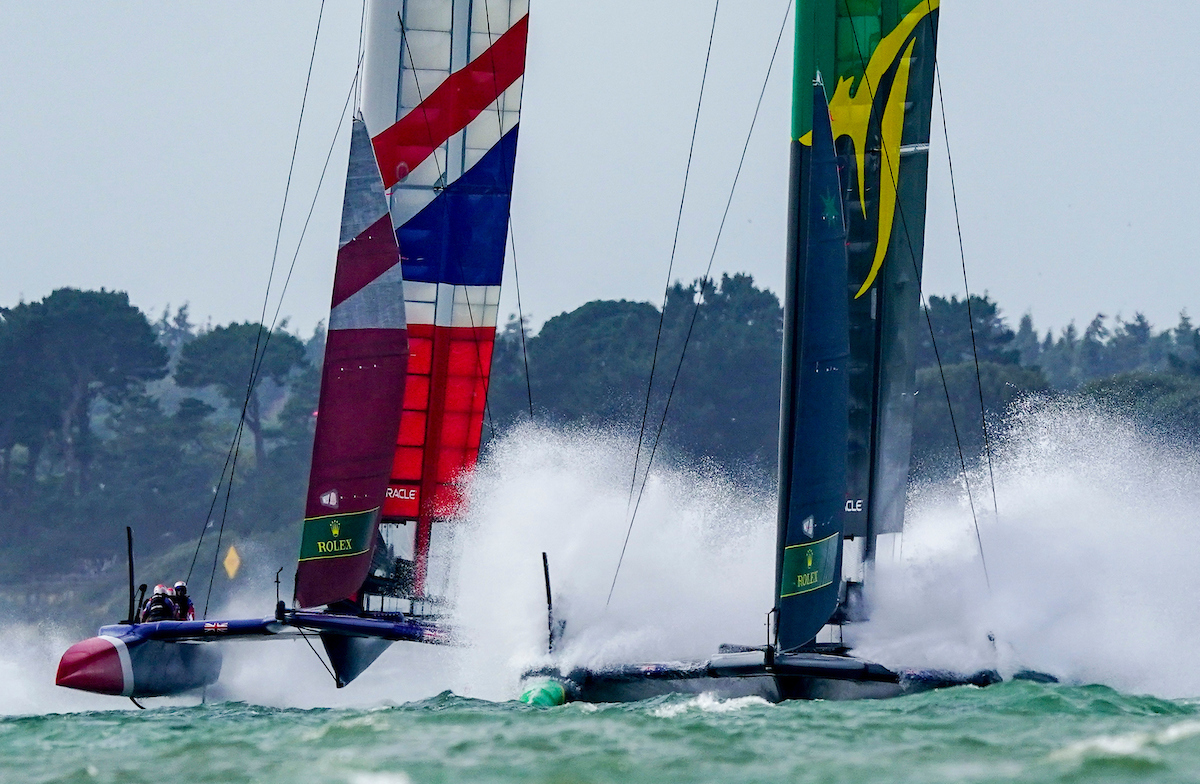 After a tempestuous weekend of weather at the SailGP Cowes event which saw racing abandoned on Saturday Rob Kothe follows up with the bruised and battered teams as they pick up the pieces ahead of the season closer in France next month.

In 1966, the Rolling Stones released an album called Aftermath. On Monday and Tuesday after the war on the Solent, that Stones album could have been playing thru the Southhampton SailGP base.

Tom Slingsby and his Australian team owned the SailGP event in Cowes, winning all three races, the American team capsized but sailed the last two races, and the Great Britain team retired after a severe crash.

Slingsby: ‘. The loan of the French boat, when our wing was being repaired in the practice period was a win, win. We got an hour on the water, and I was able to help them, they got a little leg up with me, helping them with some tips.

‘But to be honest leading into the first race, with only an hour or so of pre-race training I was quite concerned that we might get a hiding from the teams that had some days practising.

‘The British, after being the first to break 50 knots in practice were very confident, but the extreme conditions played into our hands.

‘Especially in the first race we were on edge a lot, we had some small crashes but nothing major, a huge credit to Jason Waterhouse for flying the boat so well.

‘There were big waves, we had two-metre sets when we were flying only a one-metre fly height, metre above the water, amazing that Jason was able to get us through those tough sections.

‘Then on the finishing run, that was on a quieter section of the course, so we could get the boat high and rip into the finish. Doing 50 knots into the finish in the first race was cool.’

Waterhouse commented: ‘Overall it felt loose, but we were in control at the same time. We have much less on training than the other teams, for instance, the flight control system is new, and we’ve only had a third of the training time with it compared to say the Brits.

‘We had one scary moment when we popped the windward rudder out coming to the finish line, we had identified the first bear away where the American’s went in as the most likely place for a capsize, we were just happy to hear everyone was safe.’

Nathan Outteridge Team Japan’s skipper: ‘A rough day on the Solent, the winch pedestal broke in the first gybe in the first race, when we dropped our windward hull, and our front grinder Yuki Kasatani and the pedestal were wiped out by the wave.

‘We are not making excuses, it was an error we made, but it made life very difficult, as we could not trim the wing at all when we’re on starboard tack, we rigged up a jury grinding system for the second race, but that also broke, so we ended up with nice sailing on port, but we suffered on starboard.

‘We are still in shock that we managed to get a second and two thirds with a boat that was not functioning, but I think that is massive credit to the guys who kept us still in the racing.’

Chris Draper, CEO and wing trimmer SailGP Great Britain: ‘We had a big set of waves as we bore away at the top mark, with not enough speed, so the impact was massive. We went from 45 to zero in a few seconds.

‘Our forward grinder wiped out the pedestal, and we had a hydraulic valve blow out on the leeward side, and that was the up-down valve, so we lost all our oil, and we’d blown out all the fairings.

‘In hindsight, we could have possibly done the last race, but with only one winch working on one side. The damage looked bad, but the tech team got our hydraulic power back in 10 mins to get us home, we discovered that Nathan sailed three races with one pedestal, we wished we’d given it a bash, but we’d thought the hydraulic issue was a more significant problem, but we had not enough experience on the boat and in the heat of the moment we did not assess the situation as well as we could have, but it’s very easy to say that with hindsight.

‘It all feels a bit raw now, and we are all very disappointed, but we will pick ourselves up and improve.’

Rome Kirby Team USA: ‘we felt really good until the point until we capsized. It was all OK, level, level, suddenly the rudder got air, through the trough of a wave and popped, then there was nothing we could do, over we went. It is what it is, part of racing, it was a tough one.

‘Once I knew everyone was OK, my goal was righting the boat and getting going again. We did not want to lose any more points. Quite a few people were expecting us to shut it down and call it a day, but the tech team guys and our shore crew did an awesome job. They ripped right into it, cutting fairings off everywhere and got us going.’

The foils and rudders were intact, the wing, externally looked intact. The trailing edge and leading edge of the wing were OK. But at the top, most of the internal wing struts were broken. The boat had lost its wind gear, and the electronics were sketchy, to say the least, and but there were hundreds of litres of water in the port bow.

Kirby summed up: ‘We got around the track, that is all that mattered. It was not pretty; we could barely go upwind. We salvaged some points with those last two races.’

Besides the Australian boat, two others came through unscathed.

Phil Robertson skipper Team France: ‘It was crazy, but one of the most challenging days racing we’ve ever had. It was a tough day, but we sailed safely, kept it clean and we were very fast upwind.

‘It was not an enjoyable day, but we are happy with where we finished, just a single point off second place It just shows that all our really hard work is paying off and the boat was undamaged.’

Billy Besson skipper Team France: ‘On the last training day we helped Tom, lending him our boat for his training time when he broke his wing. In return, he helped us improve our flying tack and gybing procedures, and we saw an immediate improvement in this regatta.

‘Conditions were harsh but my Nacra 17 crew, our flight controller was outstanding, our flight was very smooth, we did not break the boat, no damage at all, that is magical.

‘We were more cautious at the bear away in which the USA capsized, we waited 10 seconds, and we had no trouble, we are pushing out boat, but you need to know when to be more careful.’

‘Now to our home regatta Marseille on September 20-22nd for three days of race and the one million dollar prize.’