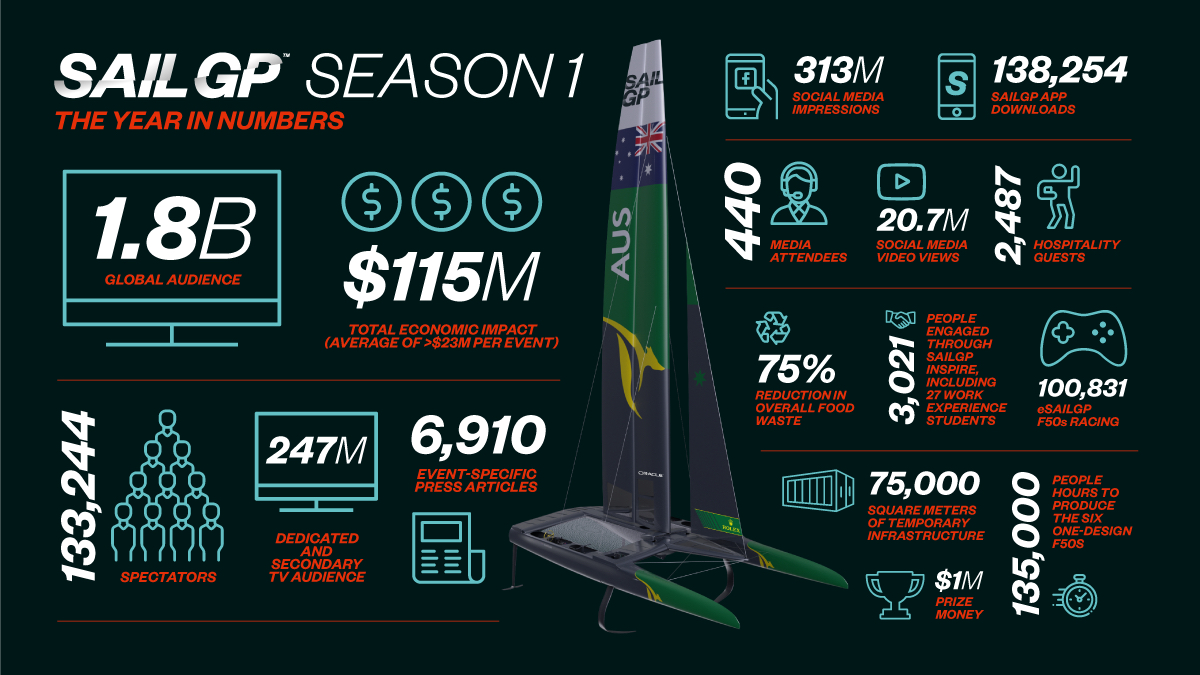 NEW YORK – October 10, 2019 – As SailGP celebrates its first anniversary, the overall impact of the new global championship has been revealed, highlighted by a total global event audience of 1.8 billion across broadcast, social, press and in-venue audiences. In its inaugural season, SailGP attracted more than 133,000 spectators to see the world’s fastest sail racing, while making a significant contribution to the five host cities, adding a total economic impact of US$115 million.

The five global SailGP events resulted in an overall economic impact of US$115 million – an average of $23 million per event – topped by $29 million for Marseille at the three-day grand finale of Season 1. The U.S. saw the biggest return, with more than $44 million put into the economy between the San Francisco and New York events. The total expenditure across all five cities in relation to SailGP equated to US$130 million.

SailGP drew large crowds at each of the events, with the peak in New York, where more than 40,000 spectators watched from the banks of the Hudson River in Lower Manhattan. In total, 133,244 spectators lined seawalls, shorelines, peninsulas and took to the water to witness the high-adrenaline racing across the world.

The global events also attracted the world’s media and VIP guests. Across the five grands prix, 440 media were in attendance, contributing to event-specific coverage totaling 6,910 articles with a reach of 1.2 billion, and 891 television features. Meanwhile, 2,487 VIP guests were hosted in the SailGP Adrenaline Lounge in the first year – including c-level executives from numerous global corporations, politicians, celebrities, and high-profile athletes from a variety of sports.

With an ambitious, award-winning remote broadcast strategy, SailGP delivered programming to more than 100 broadcast territories, as well as a complementary, state-of-the-art app, making SailGP available to a wide range of people. The new global league attracted a cumulative event broadcast audience of 247 million, through 1,519 hours of dedicated broadcast programming plus secondary TV news coverage. In addition to the live programming offered across SailGP’s social platforms, the digital-first property distributed 2,042 short-form videos during the event periods, contributing to 334 million views and potential impressions. Meanwhile, 138,254 downloads of the innovative SailGP APP have been recorded to-date.

As part of its strategy to broaden the fanbase and bring sailing to the masses, SailGP entered the esports arena at its final event in Marseille, inviting fans to race eF50s and experience what it’s like to sail the fastest race boats – without getting wet. Fans jumped at the chance, with 11,429 eSailGP races taking place during the Marseille season finale, featuring a total of 100,831 eF50s on the start line. 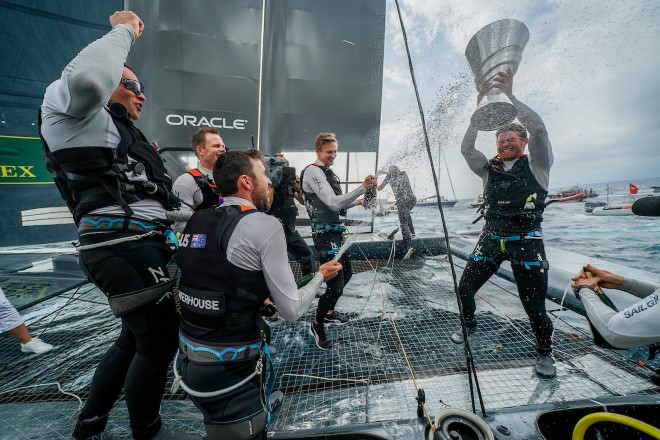 SailGP also set out in its first year to inspire a younger generation, broaden participation and revolutionize the way sailing can be used as a force for good. Launching at the halfway mark in the season, SailGP Inspire engaged 3,021 people in New York, Cowes and Marseille through its three program pathways – Learning, Careers and Racing. A total of 27 students joined the organization across all of its operations to gain essential work experience at the events and see first-hand the wide range of career opportunities within SailGP.

From its inception, SailGP has been working on developing and implementing a comprehensive strategy that sets out to deliver exemplary sustainability leadership across its operations, and exploring innovative solutions to technical environmental challenges. Embedded throughout the organization, SailGP has been working toward eliminating single-use plastics, tackling food waste, and reducing energy by testing new technologies and using biofuels.

SailGP Season 1 saw a 75 percent reduction in overall food waste, 59 percent plant-based menus, and no single-use cups or tableware across the five events. In Cowes, generators powered by vegetable oil were used, reducing the carbon impact of temporary power provision by 90 percent. Marseille included the first test bed of efficient technologies as the global organization transitions to a low carbon support fleet. SailGP is also using both recycled carbon and plastic in the tooling of the existing boats with plans to recycle boat components into new products – on and off the boats – in the coming years.

“It is fantastic to be closing the curtain on our first season at SailGP, and to be able to showcase some of the impressive results that have been achieved by everyone involved,” said SailGP CEO Sir Russell Coutts. “As a new global sports league, we have learned a lot in our first season that we can’t wait to put into practice next year as we continue to grow SailGP into a sustainable, international sports property that can compete alongside other professional sports.”

The global organization worked with Deloitte, YouGov ® Sport and Meltwater to look at all areas of the business and help understand the full impact of SailGP in its first season. A comprehensive season report will be available later this year.