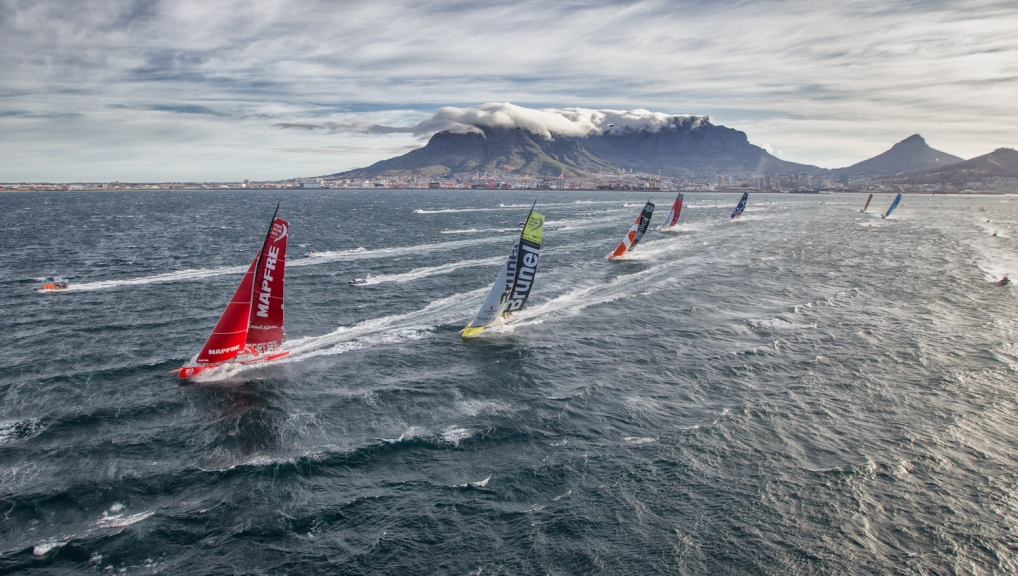 Although the start of the next edition of the fully-crewed around the world race formerly known as the Volvo Ocean race is still almost three years away there are already plenty of rumours circulating around the professional sailing world about who might be on the start line in Alicante, Spain in 2021.

The 2021 edition of the race will be the first under the ownership of the Atlant Ocean Racing event management company led by Richard Brisius and Johan Salen the two joint CEOs for the 2015-16 edition.

The entry for 2021 opens officially on December 11 but with virtually nothing known about the route and no rule yet announced for the new fully-crewed IMOCA 60 class nobody is expecting a wave deposit cheques to come flooding in at that point.

That is not to say there isn’t plenty of interest in the race – there definitely is, and most of this has been sparked by the tantalising prospect of the race taking place in the new generation of foiling IMOCA 60s, a welcome return to the eras when the Whitbread and Volvo Ocean Race were raced in the fastest and most challenging boats on the planet.

Understandably nobody is willing to publicly break cover at this point, but the rumour mill has been in full production for several months now with whispers of sponsor alliances and preliminary designer negotiations.

Having had our ear firmly to the ground on most if not all of this behind-the-scenes manoeuvring, here – in no particular order – is our highly-unofficial breakdown of the possible runners and riders for the 2021 fully crewed around the world race.

Currently Britain’s most famous ocean racer Thomson finished second in the last Vendee Globe singlehanded around the world race and has set his sights on winning the next one.

Despite recently throwing away a comprehensive victory in the Route du Rhum when he ran aground while sleeping in the final 48 hours of the race, Thomson and the team he has built around him are highly regarded in ocean racing circles.

A new generation IMOCA 60 is under construction for the 2020 Vendee Globe Race and Thomson has made no secret of his desire to transition over into fully-crewed around the world racing if the opportunity presents itself.

Key to such a move would be his ability to bring existing sponsors such as Hugo Boss and Nokia across with him, but with the on-going support of his long-time mentor Sir Keith Mills achieving this or even finding new partners is a viable prospect.

Previous commercial agreements that saw the Volvo Ocean Race headquartered in Alicante, Spain required the region/country to support a Spanish team in the race. Whether this agreement still applies under the new Atlant regime is not clear, but it is hard to imagine the race taking place without an ESP-prefixed sail number somewhere in the line-up.

Fernandez – MAPFRE’s highly popular skipper from the last two editions – is rumoured to be keen to lead another Spanish attempt to win the race for the first time. Well-funded, well-organised and jam-packed with sailing talent the MAPFRE squad was the favourite in many people’s opinion when the 2017-18 race began.

In the end they had to settle for second place behind their pre-race training partners Dongfeng Race Team who famously stole the show in the final hour of the race on the final leg into The Hague.

Whether Spanish insurance company MAPFRE is up for another lap of the world is not known right now but Fernandez is believed to have been in serious conversations with one or more of the few designers capable of designing the new foiling IMOCA 60s.

Australian Nicholson and Dane Sehested were the first to announce they were teaming up to try to fund a campaign for the next edition. The pair sailed together on Team Vestas Wind campaign in 2014-15 and again in the last Volvo Ocean Race with team AkzoNobel as watch captain and boat captain respectively.

The duo has stayed close to AkzoNobel since the last race finished in June leading the company’s post-race hospitality programme that saw around 500 corporate guests sail aboard the team AkzoNobel VO65.

In the meantime the pair – who aim to try to mount two class campaign across the IMOCA 60 and VO65 classes – have met with a swathe of European organisations including several interested parties in Denmark and opened preliminary conversations with designers.

Other than the fact that they are believed to have been in discussion, little is known about the potential for second campaign alliance for the two American sailors and the highly-active US environmental campaign organisation.

Best friends Enright and Towill have completed two Volvo Ocean Race campaigns together – the first in 2014-15 with Turkish medical company Alvimedica and the second in the last edition with joint sponsorship from Danish wind turbine company Vestas and 11th Hour Racing.

Having cut their teeth with Alvimedica the Enright and Towill mounted a potent looking campaign for the 2017-18 race with solid funding and an impressive sailing team line-up. The team looked to be strong contenders for an overall podium place after they won the first leg and finished third in the next two.

However they dropped out of contention after colliding with a commercial vessel while challenging for the lead on the approach to Hong Kong at the end of Leg 4 and later breaking their mast while in third place on Leg 7 from New Zealand to Brazil.

Meanwhile 11th Hour Racing – a race partner and sustainability partner in 2017-18 – is understood to be interested in continuing its close relationship with the round the world race.

In his interview with us recently Kiwi sailor Wislang – who has an enviable 2,1,1, track record over the last three editions of the Volvo Ocean Race – said it was no secret that he was keen to be involved at a senior level with another round the world campaign.

While there is no substantiating evidence – other than plenty of yacht club and boat show bar chatter – backing for such a campaign could feasibly come from American businessman David Leuschen who after several successful seasons with his WallyCento Galateia is heavily rumoured to be keen to get involved in an around-the-world race.

Given that his current sailing team line-up features several Volvo Ocean Race star names – including Wislang, bowman Justin Slattery, and navigator Simon Fisher – Leuschen should be have no problem putting together a potentially race-winning squad for the 2021 race.

Aside from the rumoured campaigns listed above there’s plenty of other chatter about swirling around about other possible entries.

Not least amongst them Kiwi Olympic gold and America’s Cup winners Peter Burling and Blair Tuke who got their first taste of the race with Brunel and MAPFRE respectively in 2017-18. In an interview for Omega magazine the pair confessed to harbouring plans to take on the next race together.

Also rumoured to be trying to raise the funds for a second campaign is Dutch yachtsman Simeon Tienpont who skippered the team AkzoNobel entry in the last race. Speaking of Dutch skippers, it is hard to imagine a fully-crewed around the world race without the presence of Bouwe Bekking who has competed in eight editions since his first race in 1985–86.

While there has been nothing official from either of them Vestas and the Lisbon-based Mirpuri Foundation are both believed to be considering their options on getting involved again.

Finally, what hopes of the current trophy holders Dongfeng Race Team returning for a third consecutive race? No other winner has ever come back to try to defend their title and the chances of the Chinese team being the first look slim.

There is no official news from the Dongfeng camp other than that the company is said to reviewing its participation in the last race. That’s a process that could take up to a year, so let’s not hold our breath.

Having finally won the race a skipper Charles Caudrelier is now seemingly keen to pursue an Ultim multihull campaign. Meanwhile team director Bruno Dubois was recently announced to have signed a three-year contract to run the Chinese SailGP Team.

One thought on “Rumoured around the world race teams”