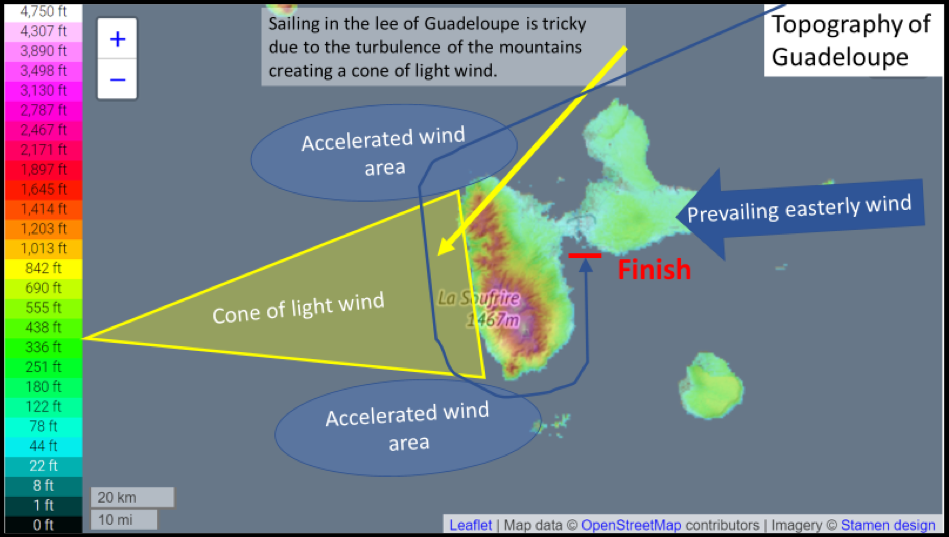 After dramatic finishes to both the Ultim and IMOCA 60 classes, the attention in the in the Route du Rhum now turns to the 53-strong Class 40 fleet. Can they produce something spectacular too? Weather expert Will Harris gives us his analysis of how the final miles of the Class 40 leaders may play out…

Nearly three thousand miles, an entire Atlantic Ocean, separates the fleet which has diminished to 38 after several retirees. Yoann Richomme Veedol still leads the charge and has done since day 1 of racing, expected to finish tomorrow afternoon. Quite an impressive feat to hold the lead from such an early stage.

Richomme always keeping second place Phil Sharp Imersys a steady 100 miles directly behind him means we are unlikely to see a nail-biter finish like in the Ultims. Instead, the fight is between Sharp and third place Aymeric Chappellier Aina who sits only 10 miles behind. Like Richomme, Chappellier has a newer design of Class 40, the Mach 40.3. These ‘scow’ bow designs are slightly faster sailing downwind and reaching angles, which the leaders have been ever since entering the trade winds 5 days ago.

Sharp has reported having to work very hard to stay ahead of the newer design. As he approaches 300 miles to the finish the focus will turn to the challenging winds around Guadeloupe that will most likely determine the Class 40 podium.

The fleet must pass to the north of Guadeloupe before sailing along the western side of the island in an anticlockwise direction. The finish is then in the bay on the southern side of the island. With prevailing easterly trade winds, the challenge is sailing along the western edge of the island in light and variable winds in the lee of the island. To the south of Guadeloupe lies the mountain of La Soufrire just under 1500m high. Topography such as this doesn’t do the wind any favours resulting in a ‘cone’ of no wind that can extend 50 miles from the island. The only option for the fleet is to sail through the light winds to reach the finish. It is quite a lottery as to how you will fair when sailing in this area. As we saw ten days ago Francois Gabart Macif being brutally pipped to the line by Francis Joyon Idec.

Sharp and Chappellier are likely to end up very close together in the final few miles to the finish. The routings have them arriving around midnight UTC Tuesday night so make sure your watching the tracker as they round Guadeloupe.

Further back, the rest of the fleet is scattered across the Atlantic. Those who are yet to enter the trade winds (around half the fleet) have an opportunity over the next two days to make an easy transition across the Azores high. A large meander in the jet stream means the Azores high will be in a very northerly position until Thursday.

Rather than having to sail around the Azores high, the fleet can take a much more direct route towards Guadeloupe while still having good NE winds. Although winning might be out of sight by now there are places still to be fought for. It will be interesting to see if places are made by the boats that manage to use this feature to their advantage.