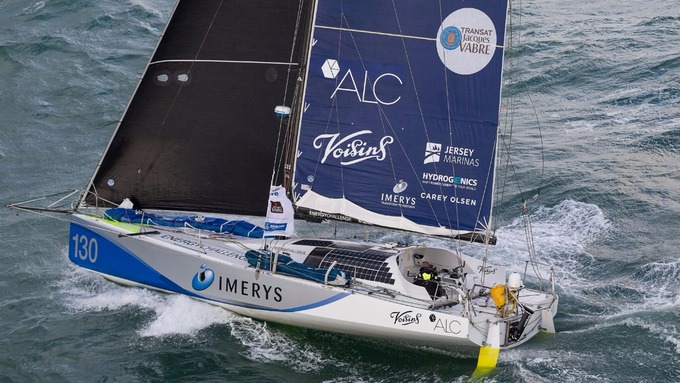 A record-setting fleet of 53 Class 40 yachts will take on the 3,542-nautical mile Route du Rhum course from St Malo to Point-a-Pitre in Guadeloupe starting on November 4.

It’s a record entry for the class and the race that means Class 40s make up almost half the total 123-strong Route du Rhum fleet in the 2018 edition of the four-yearly classic race. With the exception of the Mini-Transat no single ocean race has seen so many entries in one class.

Spanish yachtsman Alex Pella set the record time 16 days, 17 hours and 47 minutes when he claimed victory in the last edition in 2014. It’s a benchmark that will be tough to better but several members of class’ upper echelon of skippers will be gunning to do just that.

In 2006 Britain’s Phil Sharp won the first Class 40 division in a time of 18 days, 10 hours. But since then advances in design have seen this course record come down by a day in each subsequent race.

In 2010 Frenchman Thomas Ruyant reached Point-a-Pitre in Guadeloupe after 17days and 23 hours, while Alex Pella took another day off that in 2014.

Sharp’s Imerys Clean Energy entry is among the favourites for a line honours win having steered his two-year-old Samuel Manuard-designed boat victory in the 2018 Normandy Channel Race, the Round Britain and Ireland Race, and the Class 40 European Trophy.

Other Manuard designs that could be in the running include Nicolas Troussel (Corum), Maxime Sorel (V & B), Arthur Le Vaillant (Leyton France), Luke Berry (Lamotte-Module Creation) and Aymeric Chapellier (Aina-Childhood and Future).

Also keep an eye out for a couple of the Guillaume Verdier designed boats sailed by the Kito de Pavant (Made in Midi) and Antoine Carpentier (Custo Pol).