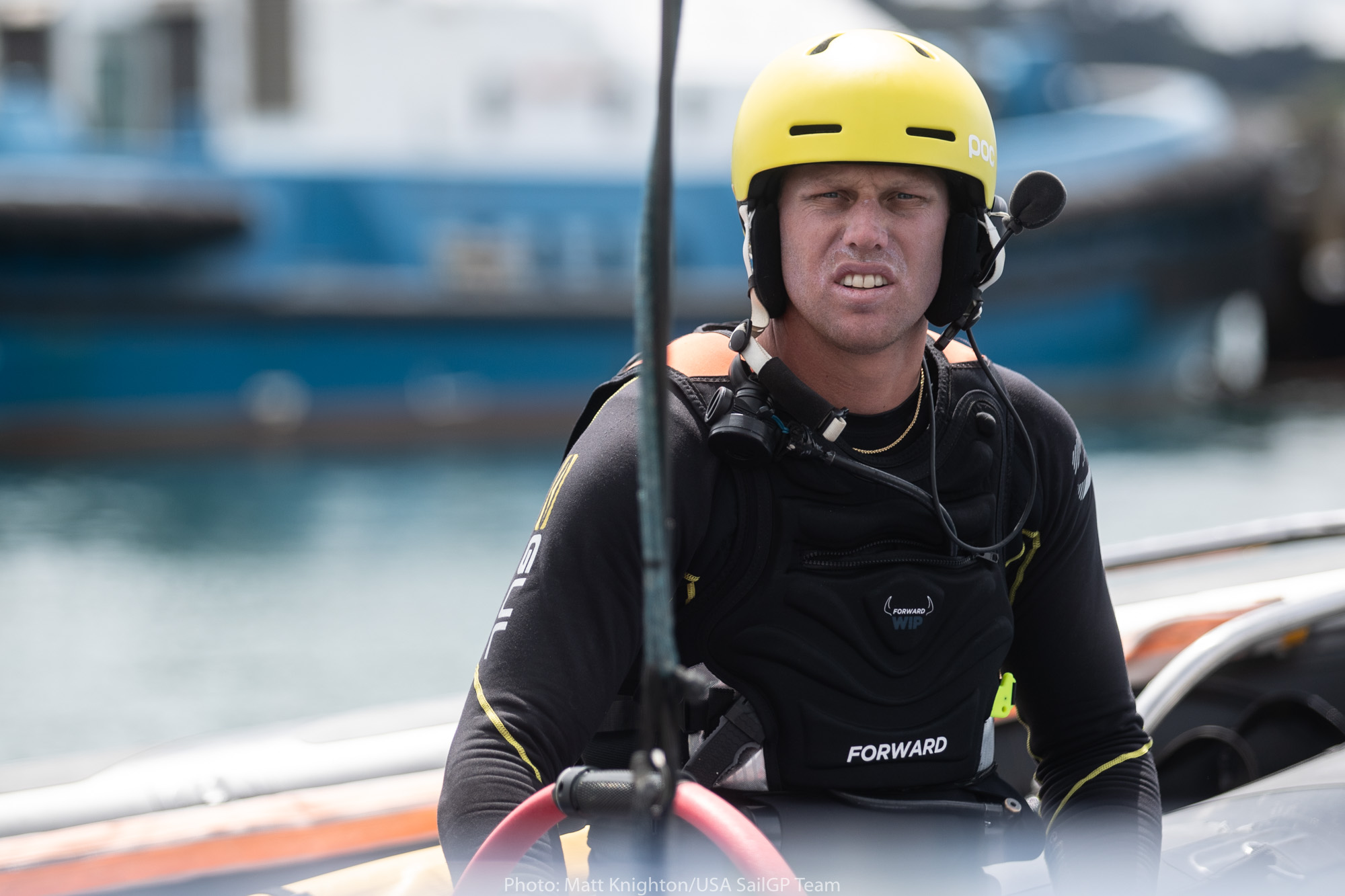 The concluding part of our exclusive interview with American sailor Rome Kirby as he takes on his first leadership role as skipper and CEO of the United States SailGP Team for next year’s inaugural season of the international circuit.

YACHT RACING LIFE: Before you got a chance to go sailing on the new F50 catamarans you spent some time training on the Artemis Technologies simulator. For those of us who haven’t seen it, can you describe what the F50 simulator looks like, what it’s like to use, and what you can learn from it?

RK: It looks pretty similar to an airplane simulator. There’s an F50 hull up on a platform and there are big hydraulic rams that control the simulator platform. Then you have got big projectors and a massive screen – I don’t know how big the screen is but it’s not far off a full 360.

The lights go out and you jump in and you go sailing. You’ve got the same controls as the F50 and it’s a pretty similar feel. There are some differences to how it feels – how your senses respond – but it’s a pretty good tool to use.

YRL: What sort of things did you focus on?

RK: It was hard to do race manoeuvre’s , but what we focused on was just getting comfortable with the controls and straight line sailing and the doing bear ways and getting used to doing them and straight line reaching with full [rudder] differential in.

YRL: Soon after that you headed off down to New Zealand to sail the new boats for the first time. As someone who’s got experience on the old AC50s, how different are these F50s to those boats that we saw in Bermuda?

RK: They’re a fair bit different. The boats are definitely different to sail in that they are not as physically demanding and as hard to sail as what we had in Bermuda. The hydraulics are not manual anymore – in Bermuda everything we did on the boat was manual, which was tough.

With the new foils the F50s are definitely from a stability standpoint a bit harder to deal with. We have pretty good control systems though to deal with that.

From a straight-line speed point of view these boats are unreal. I think you’ll definitely see 50 knots pretty soon out of these boats. Our team did 44 as our top speed. I think the Australian team just did 49 so I’m pretty confident we’ll see 50.

YRL: Where is this additional speed coming from? Is it the active rudder control that enables you to push harder?

RK: No not really. We have new foils in the boats and because we’re not restricted by the America’s Cup rule these boards have a bit more righting moment.

YRL: Talk a little bit about what you mean by “differential”.

YRL: Which translates into more power – which means more speed?

RK: Yes – but it could also turn into massive crashes. If you pop that weather rudder out at 50 knots with full differential in it would be like some big guys off the back corner of the rail just basically jumping off the side of the boat. All of a sudden you lose a ton of righting moment and the boat goes into a massive high fly and yeah, it could be disaster.

YRL: Is that the biggest fear when you’re driving these boats – or are there other potential situations for disaster?

RK: [Laughs] There’s potential for disaster everywhere on these things. I think a lot of us are pretty comfortable sailing with one other boat on the racetrack. I don’t think we know what it’s going to be like sailing with six, especially at these speeds.

In the [previous] World Series they were smaller boats and not even as close to as fast. So I think that’s going to pose some pretty interesting challenges having six boats foiling around at 35 to 50 knots. It’s going to be pretty full on.

YRL: Is this something that you can feed back into the organization? Is there a dialogue between the teams and the organisers to voice those concerns?

RK: It’s definitely a pretty open line of communication between the teams and SailGP. I think everyone’s learning as we go, and the biggest thing is we want to be safe and we want to be smart. You obviously want to put on a good show, but I think safety is the big consideration.

From the safety to the boat development, I think everyone’s on the same page. We obviously want the event to be a success, and we want this [circuit] to continue on, so I think everyone’s pretty open and sharing ideas and concepts and all sorts of stuff.

YRL: As a skipper, what sort of goal are you setting yourself for your team in this coming season?

RK: Obviously, we want to do well, but I think the biggest goal is learning and developing at each event and getting better. I think we’ve got a massive opportunity as a group that’s one, never sailed together, and two never sailed these boats before. If we can learn from ourselves, and from some of the teams that have sailed a lot with each other – and also sailed in these boats a lot – I think I’d be pretty happy with that.

YRL: Having done the America’s Cup and having now sailed these boats a little bit, what do you think is going to be the key to success? What are the good teams going to be able to do that the weaker teams can’t?

These boats are not easy boats to sail and if you try and over-complicate things, it just makes it impossible and it’s going to bite you. So yes, there’s a premium on boat handling and keeping it simple.

YRL: What’s the program now for you guys. You’ve got one month left in this year and then a couple of months of next year, and you’re into the first event. What’s the schedule for your team?

RK: Right now, the guys are packing up our boat in New Zealand. That gets shipped over to Australia. I think some of us on the sailing team are going to try to get down to sail Moths together in Miami in the next few weeks, once some of my guys are done with their Olympic stuff.

I think we’re going to try to get together once before Christmas and then we’re pretty much into it mid-January when we head back down to prepare for the first event in Australia.