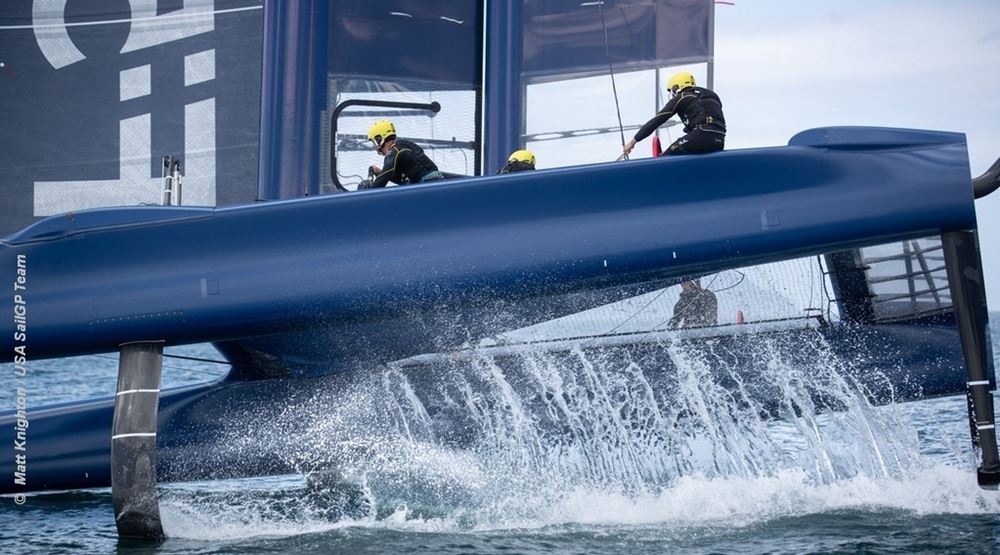 American sailor Rome Kirby has is well known in the professional yacht racing world as an America’s Cup winner, a Volvo Ocean Race competitor and a regular on a number of top-flight grand prix raceboat campaigns.

Now though he has been elevated into a leadership position as he takes on the skipper and CEO role with the United States SailGP team for the brand-new international circuit’s inaugural season next year.

For this two part interview we caught up with Kirby shortly after he and his newly-recruited crew returned from New Zealand where they had experienced for the first time what it is like to sail their new F50 high-performance foiling catamaran.

YACHT RACING LIFE: We know you as a Volvo Ocean Race sailor, an America’s Cup sailor, and a regular on grand prix race boats – now here you are as skipper and CEO of a team in the brand new SailGP circuit. How did all this come about?

ROME KIRBY: Well there were definitely whispers of this whole thing for quite a while, but I don’t think anyone in the sailing world was 100 per cent sure it was going to happen. But the opportunity came about last April with a phone call from Russell Coutts.

I was at the Moth World Championships. He just asked if I’d be interested. After listening to him for about 10 minutes and listening to the vision and what they want to do with the circuit, it was a no-brainer for me.

YRL: Your reputation as a top-flight crew member is second to none, but for this campaign, you’re going to be the skipper – the one leading the whole crew and the campaign. Is that a daunting prospect? Does that hold any fears or worries for you?

RK: Like anything, you want to be successful and you want to win. We definitely want to put together a sustainable team and campaign. There’s definitely fears – well I wouldn’t say fear, but there’s definitely stuff you’re worried about. But at the end of the day, we’re competitors and I’m looking forward to the challenge.

YRL: How much control have you had to be able to pick your own team through this whole thing – or is this something that’s been handed down to you?

RK: No, for the most part I’ve been able to pick the entire team, which has been great. Obviously, within the US we don’t have a ton of F50 experience. But we’ve got a bunch of really talented sailors and now we just have to bridge the gap in terms of experience and learn on the fly – that’s going to be our biggest challenge.

Season one is going to be about getting up to speed and making sure we’re competitive with the other teams. YRL: Give us the rundown of your sailing team line up?

Then there’s Hans Henken – he’s another Olympic sailor sailing the 49er. He’s really, really smart. He went to Stanford and got a degree in aerospace engineering. So he brings something a little different to the team, which is pretty good. Plus he’s fun to have around.

Mac Agnese is a great young sailor campaigning in the 49er as well.

Then there’s Dan Morris who has a great sailing track record in the last few years with Congressional Cup wins and Marström 32 campaigns and he’s doing the GC32 stuff with Red Bull.

YRL: Where do you rank yourself in the pecking order among the six teams announced for the first SailGP season?

RK: We have a pretty good set of sailors but the F50s are unlike any of the boats they’ve sailed so we’ve got a pretty big mountain to climb to get to the level where the Australian team or the Japanese team is at. Those guys have had tons and tons of time sailing with each other in these boats.

It’s hard to knows who will be the top teams but I would say those guys and the British are probably up there as the ones probably going to be the most competitive. But we’ll see what happens. We have a big mountain to climb but I have no doubt we’ll be able to mix it up though.

YRL: How is your team structured? Tell us who else is involved?

RK: Each team is set up differently and has a different approach. For the most part our team is relatively straightforward. We have got a pretty small group. We’ve kept it pretty small but all of us have worked together before on other campaigns.

Jeff Causey is running the shore team. He was with us at Oracle [Oracle Team USA] for the last two America’s Cup campaigns. Under Jeff there’s five people on the shore side.

We have Louise Matthews – who was with Oracle as well – doing all the logistics and essentially keeping us in line.

Then we have Tom Burnham as our coach. Tom was with Artemis for the last America’s Cup.

So you can see that the majority of us were with Oracle, but we all know each other pretty well, so the team has been able to kind of hit the ground running, which has been nice.

YRL: Are you all now full time on this campaign? What have you been focusing on?

RK: Yes it’s been pretty full time. Our team’s been together since July so we have been up and running before other teams. That’s been nice because it’s given us time to get to know each other and get familiar with the whole group.

We wanted to try guys out by getting them out sailing straight away so we decided to do a training session in Newport in August one of the Foiling 45s – that way we all could at least sail with each other prior to going to New Zealand and sea trialling an F50.

YRL: Is there a physical team location or are you guys operating out of hotel rooms at the moment?

RK: We’re all over the place. It’s tough to have a base somewhere, especially when the boats were launched in New Zealand and the first event is in Sydney and then the next one is in San Francisco.

So yes we are spread all over the place. It’s a lot of phone calls and emails, but we’re making it work. YRL: A lot of that work must fall on you as the skipper – to coordinate, to just keep beating the drum?

RK: Yeah, I feel like I’ve got the phone glued to my ear 24/7 now. I went from just being one of the boys, showing up and going sailing, which was pretty nice at the time, but now you’ve got to orchestrate everything. But, it’s an awesome challenge. I’m really enjoying it, so I can’t complain.

YRL: Has this experience given you any new-found admiration perhaps for some of the skippers who you worked for before?

RK: Yes, for sure! Jimmy Spithill had some good words of wisdom for me. He’s been passing along some good info and that’s been much appreciated.

YRL: As a crew you guys worked on the F50 simulator before you went down to New Zealand. How was that experience?

RK: We went over to London to use the simulator a few weeks before we went down to New Zealand. I didn’t have too many expectations going into it but when we got there I was pleasantly surprised with what Artemis Technologies has done and the level that the simulator is at.

The amount we got out of it in the three days we were on it was pretty impressive. What you can achieve in three days is probably equivalent to doing a week and a half on the water.