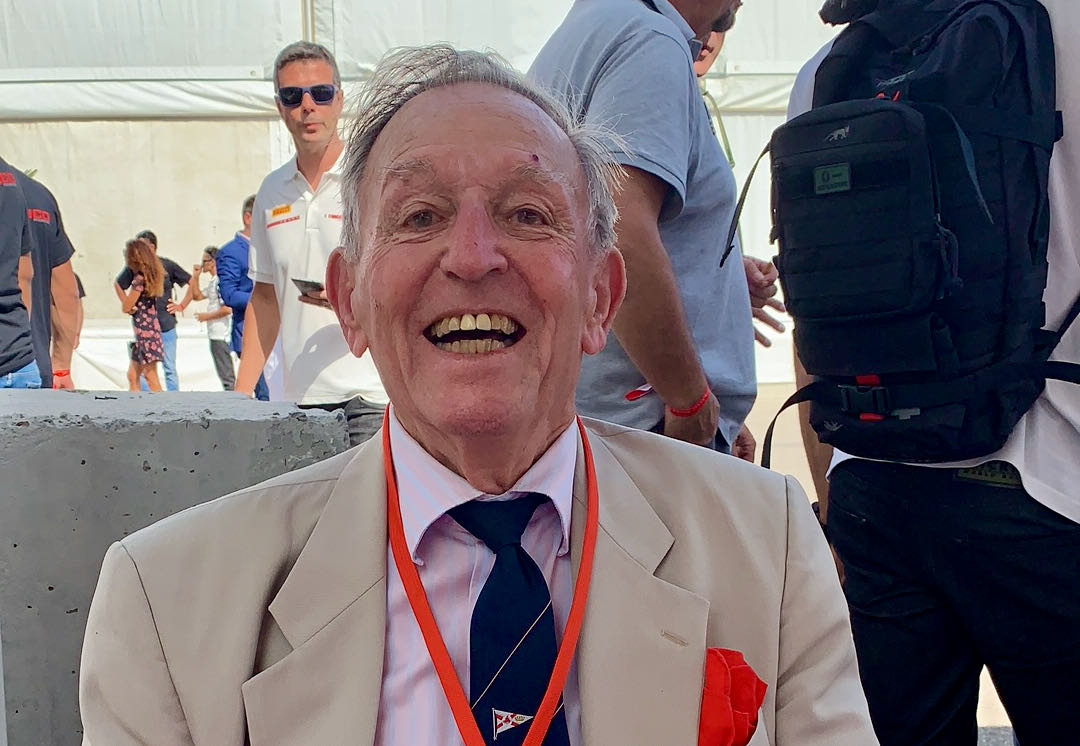 Following the sad news that British sailing writer and America’s Cup expert Bob Fisher has passed away, Yacht Racing Life editor Justin Chisholm put together this tribute to one of yachting journalism’s most experienced and talented protagonists.

Like many people, I honestly expected Bob Fisher to be around forever. A true icon of the international sailing scene, Bob had been a commanding presence in the media centres of every major regatta around the world for six decades.

He filed stories mainly for The Guardian newspaper and Yachts & Yachting Magazine (which back then was a once-a-fortnight bible of the UK sailing scene), but also worked extensively for the BBC. His BBC work included a consultancy role on Howard’s Way, the 80s hit Sunday night prime time show based around a fictional boatyard in the yachting mecca of Hamble on the English south coast.

Asked to come up with a credible plot twist to invigorate the show’s storyline Bob suggested the central characters attempt to design and build of a radical ultra-light displacement boat that would transform the racing scene. The idea did the trick and after the series finished Bob and his wife happily raced Barracuda of Tarrant for the next 10 years at regattas around the UK.

More than anything Bob will be remembered for his love of the sport of sailing. Not only could he write well, but as a successful dinghy and yacht racer of some renown, he had the added advantage of knowing what he was talking about. That counts for a lot when you want to interview the top names in your sport and Bob had instant access to anyone he wanted to speak to.

My own memories of Bob span six decades, from poring over his column in my older brother’s copy of Yachts & Yachting back in the 70s, to seeing him pulled out of the commentary box at the Southport 24 Hour Race by an irate Bolton Sailing Club team who had had just about enough of his commentary which they say favoured the Queen Mary Sailing Club team which was packed with British Olympic stars; to watching him tear past at the helm of Barracuda at the Scottish series as the crew of our Sigma 33 nudged each other and pointed at “that boat off the telly!”, to an inauspicious starstruck meeting him for the first time in an America’s Cup media centre Valencia when he and his partner in crime Stuart Alexander of The Independent newspaper studiously ignored my presence on their table for the close to a week, to finally – and mysteriously – being invited to come for a coffee with the dynamic duo, a move which did not go un-noticed by the rest of the media centre and marked my official acceptance as a part of the international media pack.

Bob was a lovely feller, but he was also no angel. He could be obstinate and cantankerous when he felt like it and he certainly didn’t suffer fools gladly. I remember him asking in a loud voice while (knowingly) in close proximity to the PR representative who had email him her team’s latest press release: “Who the hell wrote this crap?”.

But he was very kind and generous to me over the time that I knew him well. He taught me a lot about how to write about sailing. In particular he was fastidious about grammar and
spelling.

One of his favourite pet peeves was using the word ‘helm’ to describe the person steering a boat. “It’s bloody ‘helmsman’” he would exclaim. “The helm is the steering gear on the boat. A helmsman takes the helm.”. He drummed that so clearly that I can’t type the word ‘helmsman’ now without thinking fondly of Bob.

I had the pleasure of commissioning him to write for me while I was at the helm (got it right, Bob) of Sail Racing Magazine. I was trying to get a new venture off the ground and Bob could easily have said no to my request to become a contributor. But he didn’t and he was the model freelancer – sending his crisp error-free copy and his very reasonable invoice in both bang on time.

Bob taught me how to conduct myself as a sports journalist – including some sage advice not to get too ‘pally pally’ with the sailors. “They need to know who you are, and you need to have their respect,” I recall him telling me. “But you need to be able to ask the difficult question and when you need to be able to write something they might not like.”

He also taught me how to enjoy the job too. Bob was the personification of the old adage: “Find a job you like, and you will never do a day’s work for the rest of your life”. He was a great role model in this regard and I am trying to follow in his footsteps as closely as I possibly can.

He rarely missed a press drinks and nibbles event – or as Stuart Alexander once put it: “Bob would turn up to the opening of an envelope!”. But he was there for the stories as much as he was for a free cocktail or canape. He liked to hear them, and he really loved to tell them.

And they were good stories too. Like how he broke the story of the terrible 1979 Fastnet Race disaster when a vicious storm system sweeping over the race area caused mayhem and death across the Irish Sea.

Bob had watched the start of the race in Cowes from a comfortable vantage point and then jumped aboard a Southampton to Plymouth train to get established for the line honours boats finishing later in the week. But when he stepped off the train he founds the pubs empty and the lifeboats all at sea after receiving multiple mayday calls form the Fastnet fleet.

This was long before the days of mobile phones, so Bob called the BBC from a pay phone box, shovelling in coins as he tried to let the world know a disaster was unfolding in the English Channel. Bob stayed at his post for a week with minimal sleep as he filed the stories that kept the world updated.

The last time I saw Bob was last October in Cagliari, Sardinia at the official launch of the first Luna Rossa Prada Pirelli AC75s. I was there in my then role communications director for the Challenger of Record organisation for the 36th America’s Cup. It was a very, very, very, Italian-centric event and Bob was the only British journalist invited.

I sat with him for most of the day, shaded from the still-fierce Sardinia sun beating down on the Italian team base (see main image). We ate spectacular pasta and sipped Italian wine as we chatted about the America’s Cup, The Ocean Race, ‘bloody Brexit’, and anything else that came into our heads.

He had plenty to say and he was excited to have been commissioned by Prada co-CEO Patrizio Bertelli to write a coffee table book about his Luna Rossa team’s latest foray into the America’s Cup.

But I remember our conversation being very stop-start, as every few minutes we were interrupted by an America’s Cup sailor, journalist or other sailing legend wanting to stop and chat with the man known around the world as “Mr America’s Cup”.

It was a treat to witness this demonstration of respect for Bob and his contribution to the sport of sailing. It’s also the very happy way I am going to remember my good friend and colleague.

Rest in peace Bob, I will miss you.

But I also know you will already have got the best seat in the great media centre in the sky and you will be watching intently as the Vendee Globe comes to a crescendo over the next 24 hours or so, and when the America’s Cup action recommences this weekend.