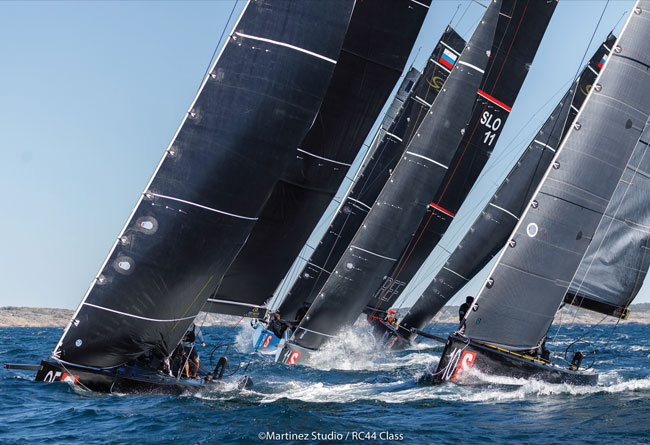 Classes of raceboat tend to die prematurely once they reach a certain age. Ironically this seems to have less to do with the boat and more the marketing or having the correct driving force behind it. Witness Peter Morton miraculously breathing life back into the Quarter Ton class, a boat on which many sailors cut their teeth – and can now afford to own. Compare that with the premature demise of the much-loved Mumm/Farr 30.

Attempting to ensure it is one of the success stories is the newly rechristened 44Cup, formerly the RC44 Championship Tour. This year it starts its 13th season with staunchly faithful owners resolute in prolonging the life of their beloved circuit.

Those involved are experienced, level-headed individuals who have been through many classes before finding their home with RC44s. They include Artemis Racing’s Torbjörn Törnqvist, a former Audi MedCup TP52 champion and the 44Cup’s reigning champion Nico Poons, who previously campaigned a Farr 40 and a Swan 45.

Aleph Racing’s Hugues Lepic also came from Farr 40s, while Peninsula Petroleum’s John Bassadone went through a J/109 and a GP42 before arriving at the 44Cup, where he has remained for nine years. Then there’s Vladimir Prosikhin, enticed into the circuit while having a cruising boat built, who in 2018 became RC44 World Champion for a third time. Others like Team Aqua’s Chris Bake and Team CEEREF’s Igor Lah have stayed with the class since its outset.

All recognise the value the 44Cup provides, enabling them to compete at the highest level with crew who are likely to be racing a Maxi 72 or TP52 the following week. The tacticians who guide them around the racetrack, coaching them en route, are all America’s Cup or 52 Super Series calibre, or have Olympic medals. 2019 will see regular 44Cup tacticians like Dean Barker, Ray Davies and Vasco Vascotto re-joining their America’s Cup teams, replaced by Tom Slingsby and Ed Baird.

Thanks to the RC44 being a hitech, but (by today’s standards) a relatively low-cost one-design, the price of racing one is a fraction of the cost of a box rule boat. Relatively, the expense of buying a boat is negligible – a new one is around €450,000; a good second-hand example is €250,000 complete, including a flat rack container and a 20ft workshop/storage container.

Depreciation is slight as even old boats are competitive: Teams Nika and CEEREF for example have been racing since the class’s start, yet the former was 2018 World Champion; the latter won the 44Cups in 2016 and 2017.

Running costs are typically €450,000 to €700,000 a year as there are few opportunities for teams to outspend each other and there is no arms race. Sail inventory comprises a main, three jibs and two spinnakers, plus a one-design class gennaker. Sail buttons are limited to six per year, with an extra permitted for teams completing a whole season. Annual sail budget is around €120,000.

Beyond this are salaries for crew and shore crew and extras such as coaching. Among the eight crew, up to four can be World Sailing Group 3 pros. Few shore crew are required – if a boat is damaged, it is fixed by the 44Cup’s own boatbuilders. If things go badly wrong, structural integrity should remain intact as the two most vulnerable areas, the bow and stern, are removable.

Transport is especially cost-effective. The RC44 was conceived as being not just a great 40+ft raceboat, but one that fits into its own 40ft flat rack container. Shipping this way is around one third to a quarter of the cost of deck cargo and makes storing the boats easy, with reduced risk of damage.

The RC44’s bespoke container is a design masterpiece. It allows the boat to be assembled and stowed away without a crane or forklift. Four vertical beams plug into the flat rack, enabling the hull to be elevated by four metres. The keel fin is dropped onto the bulb and the hull onto the fin. The carbon fibre foil weighs just 120kg and can be positioned by three people.

Shipping is also zero stress as it is all handled by the class association. One of the few stresses for crew is staying within the class’s maximum combined weight of 680kg.

Is the boat is outdated? Not at all. The RC44 was drawn by Andrej Justin and is built by Pauger Carbon Composites in Hungary, but the boat and circuit were conceived by Russell Coutts in his most creative period, “between” AC campaigns. Coutts, one of the greatest sailors of all time, also subsequently developed the boat – that’s like Lewis Hamilton or Sebastian Vettel creating and then tweaking your racing car.

The RC44 may be a one-design, but it should be thought of as Coutts’ best expression of a fully teched-up 40ft+ grand prix raceboat (albeit one that fits into a container and is exclusively amateur owner-driven with an experienced crew) that has been “production-ised”. It has not been dumbed down nor built to a price as one-designs often are. It may not be the ultimate state of the art, but it is fully carbon fibre and 90 per cent there.

Others have tried to better the RC44’s core features but over the last 13 years none have come close. It was for this reason that the RC44 owners recently voted not to change the boat – there was nothing better out there and certainly nothing as cost-effective. 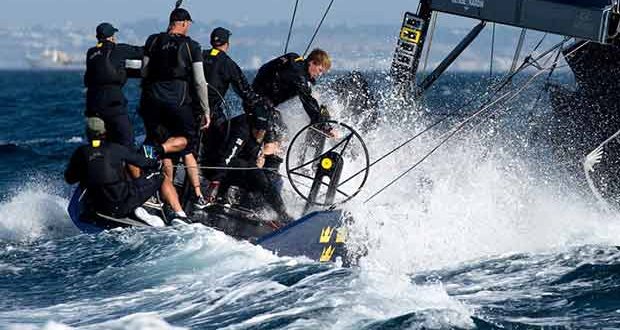 In contrast with more modern designs the RC44 is unfashionably slender, with just 2.75m beam compared to the Melges 40’s 3.5m. However, this enables the boat to fit in its container. While fat, powerful hulls are the trend, there are other ways to gain righting moment – like the RC44’s deeper keel and bigger, CNC-machined bulb.

Skinny hulls also have low drag, making them particularly effective upwind. The RC44 is assisted by a trim tab, allowing its foil to have a smaller section with lower drag, eliminating leeway and improving pointing. Similarly, the bowsprit articulates, enabling the boat to sail deeper.

Artemis Racing tactician Andy Horton observes, ‘the narrowness of the RC44 and the trim tab let you point well upwind (some of the wider boats just won’t do that) and the foils are more efficient downwind.’

It has been observed that the RC44 has similar lines to a V5 America’s Cup Class boat, but there any comparison ends. The RC44 has an entirely different length: displacement ratio, with a light displacement of 3.5 tonnes (compared with 3.8 for the Fast 40+) and around 2.2 tonnes in the bulb. Its 63 per cent ballast ratio is high compared with a modern yacht (34 per cent for a Melges 40, albeit with a canting keel), but the boat remains light enough to plane in just 15 knots.

As Coutts intended with his subsequent AC catamarans, the RC44 can sail well in the broadest wind range. This recognises owners’ time being ultra-precious by minimising days lost due to unfavourable weather. The RC44 is genuinely able to race well in five knots and is a blast in 25, when the boat sails downwind at roughly wind speed.

Team Nika’s Vladimir Prosikhin shares his view: ‘The RC44 is unique, a completely extreme boat, no compromise, nothing inside, very light, very strong, very narrow. In less than five knots, it makes six knots because it is a narrow, very slippery boat. When it blows, the boat does 22 knots and planes easily. It can be difficult to control, a bit like riding an Arabian racehorse! But that is what a good rider wants. The racing is totally fair. Ashore the hospitality and support is unbeatable. And I’ve made some close friends.’

The RC44 class is managed by Bertrand Favre, who also runs the D35/TF35 catamaran classes, but the owners call the shots. Two seasons ago, they shortened events by a day, dispensing with match racing. They also reduced course lengths (now 0.8-1.2 miles), enabling 10-14 races to be sailed over each event’s four days, further maximising their “bang for buck”.

From the outset, the class has had top-level race management run by Peter Reggio and Marco Mercuriali. RC44 class events are “family friendly”, with a VIP entertainment area and a hospitality boat from which friends, family and sponsors can watch the racing. A guest sailing programme permits guests to experience the thrill of sailing an RC44 when conditions allow.

As an owner-driver boat the RC44 is second to none. It is even suitable for owners with little experience. With a good crew and a top tactician on board, it is possible to be winning races within a season.