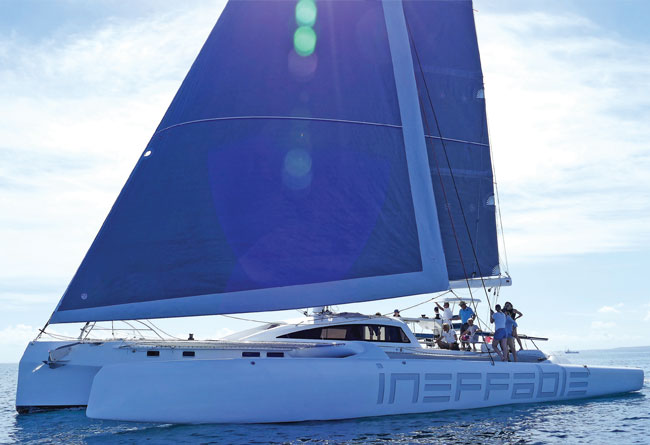 In a multihull marketplace previously dominated by two-hull offerings a lot of careful thought and informed-development is ensuring that the trimaran configuration is finally getting more of the recognition that it deserves.

Rapido Trimarans, is the brainchild of directors Paul Koch and James Sganzerla, who ran the highly regarded and successful Corsair Marine from 1994 to 2010.

Their collective experience of 60 years building more than 1,500 trimarans is combined with the corporate and production management expertise of Richard Eyre, Phil Johns and Damien Judd. The hard-won experience and eye for detail of this core team guides their talented, 60-strong Vietnamese staff at Triac Composites, who produce lightweight high-end composite structures that span numerous disciplines.

‘Compared with cruising cats, cruising trimarans in general are much simpler for their reliance on only one system for steering and propulsion,’ says Rapido’s designer Pete Melvin, who is one half of the mighty Morelli and Melvin design house famous for everything from America’s Cup and Jules Verne Trophy winners to cruising multihulls and Olympic Class one designs.

‘Less weight, complication, maintenance, tankage and cost are all factors that appeal to serious cruising sailors who are interested in getting further, faster and hassle-free. Sail control systems can also be simpler as the distances to route control lines can be less with a single, central location. This is also less hassle and expense.

‘We produce a high-performance line of trimarans that also offer reasonable amenities and safety. The innovation in design comes with the layout of the main hull and reaching the balance between beam, draught and trim to carry the accommodation without too much compromise on performance,’ he adds.

On both the Rapido 60 and 50, keeping the main saloon on the same level as the cockpit promotes a flow-through feel of being more spacious with better visibility and light than conventional designs. This elevated floor plan is possible with a generous, yet streamlined design to the cabin and also allows for the extra volume needed under the floorboards for propulsion and plumbing systems, fuel, water and waste tanks and storage for other heavy items without hindering access for maintenance.

On the Rapido 60 this is especially true of the full-access engine room next to the daggerboard case at the weight centre of the boat. All parts of the Yanmar 4-cylinder 53 HP diesel are accessible from all sides. This space also includes the fuel tank, an optional 8 kW generator, Spectra 24V electric watermaker, a water heater and electrical charging systems. Watertight bulkheads and an automated fire suppression system protect the space, and since all filters and serviceable items are in this isolated area, any leaks or spills will be confined and easy to clean.

The main hull’s beam achieves a similar balance of desired interior volume for good accommodation without too much compromise on weight and drag under sail. The cross-sectional shape of the main hull tapers with elevation to create more volume. Unlike a monohull, this portion of the hull never sees the waterplane due to the constrained heel angles. The stability advantage in Rapidos comes in part from their high volume floats and a wide beam relative to their maximum displacement. Add the C-curved twin daggerboards on the Rapido 40 and the boat can be driven even harder.

Passive ventilation and Lewmar hatches and portlights ensure that the saloon and cabins are airy on all three designs. The carbon fibre foam sandwich construction provides a high level of insulation. There’s enough space aft of the beams and over the transom for solar panels to provide supplementary electric charging to the DC voltage system.

Paul Koch’s extensive experience is shown in both the build quality and clever innovations. His 30 years of collaboration with Pete Melvin has created a trust uncommon in many designer-builder relationships. Triac Composites’ in-house design engineering team ensures faithful and accurate fabrication to the design specifications provided by Morrelli and Melvin.

Among the modern equipment at Triac’s 3000m2 facility in Ho Chi Minh City is a seven-axis Kuka robotic CNC machine mounted on a 23-metre track for milling complex tooling moulds. This is in addition to other CNC machinery, an 8.5 metre autoclave and other equipment that makes Triac a regional leader in the production of complex composites. The factory is on a river with direct access to the sea so boats of any size can be sailed away.

‘We use pre-preg carbon for the high-strength parts such as the cross beams (which are cured in the autoclave), chainplates and bulkheads,’ says Koch. ‘The cross beams are tapered on the ends so assembly is easy, the fit in the main hull is perfect and it’s strong as hell.’

Construction is infused carbon/vinylester laminates on closed-cell PVC cores for high-strength areas and E-glass where carbon is not needed. Vinylester is used in the hull and deck laminates for good adhesion and better compatibility with the gelcoat finish than with epoxy laminates, which are used in the structural elements of the boat. Construction meets ISO/CE standards and with CE Category A certification.

The mast is carbon and on the Rapido 60, the diamonds are Future Fibres’ carbon EC-6 attached to a titanium plate tensioned by a hydraulic ram positioned at the mast base. The ram allows easy tensioning for tuning. Deck gear has all Harken winches and blocks, with Spinlock and Karver clutches and Karver halyard locks to reduce rig compression loads, which are adjusted at the tack of the headsails by deck-mounted tensioning systems.

The furling Solent genoa mounted on the inner forestay is self-tacking and the mainsail reef system uses Karver reef hooks mounted on Dyneema straps wrapping the boom to distribute the loads with minimal chafe. A furling fractional Code 0 and a masthead furling gennaker tack on the bow just ahead of the headstay. Two Harken winches on the cabin top forward of the helm station handle main and Solent sheet loads. Rope clutches for halyards, mast rotation and board up and down controls are positioned to use the same winches.

The boom has truss wings with netting to catch the full-battened mainsail, which is on Antal sliders for easy hoisting, reefing and furling.

On a windy tight beat the Rapido 60’s performance is amazing, with racing monohull angles (thanks in part to the deep carbon fibre daggerboard) and speeds of 17+kts, while at reaching angles the boat far exceeds windspeed with exhilarating acceleration. There is a sweet spot between 18 and 23 knots where the boat simply purrs with one finger on the wheel. Even at 27kts the feeling of absolute control, comfort and security is most apparent.

‘At 10 tons in racing mode and up to two tons more when fully equipped and provisioned, the Rapido 60 is a perfect platform for long-distance and ocean cruising,’ says Koch. ‘The Rapido 50 is also suitable for this kind of cruising, while the Rapido 40 is designed for more regional use. We are excited about offering these easy, fun to sail, safe performance trimarans that have so much living space. Interest in these fast and innovative designs is strong as they fill a real void in the market.’

For ratios of length, beam and displacement trimarans generally offer greater sail-carrying power and higher performance than equivalent-sized catamarans. Because all the elements of the propulsion, electrical and plumbing systems are contained in one hull and not spread across two, there is also less weight to drag through the water and the centre hull’s design can be more forgiving in trim variation than with most cats.

Trimarans are more stable and more sea kindly than monohulls and catamarans and do not have the slamming and fore-and-aft pitching of cats or the terrible 30 degrees-plus heeling of monohulls. Centralising all heavy equipment in the centre of the main hull, as Rapido does, contributes immensely to comfortable, stable movement through the water.

Accommodation can be as spacious as most monohulls and given the angles they sail at, even in hot summers there’s usually good air flow and shade. Retractable daggerboards and rudder blades enable exploration and anchoring where fixed-keel monohulls cannot venture. Being able to anchor nearer the shore means even coming late to an anchorage one generally gets the prime spots.

As the space taken by support systems is only in one hull, it leaves the outboard amas available for light item storage, water toys, fenders and ropes. The R60 has a custom hatch to access the four-metre-long storage area. With the foredeck and “acres” of nets to lounge on safely even at speed, plus the aft deck with custom outer seating, separate cockpit and generous saloon (plus cabins), owners, crews and guests can choose to be sociable or find their own private space. The other standout is the helm position, with complete 365- degree visibility and views of the bows of all three hulls.

While monohulls will heel at 25 or 30 degrees, making basic daily tasks and just getting around the boat something of a tiring and even athletic event, trimarans with their relatively flat sailing give far greater comfort, better rest and less stress. The longer centre hull and centerlinemounted rudder and daggerboard contribute to having better monohull-like manoeuvrability than catamarans, particularly while tacking. The lack of a bridge deck also eliminates the slamming of waves common to most catamarans, which significantly affects their ride quality and speed when sailing upwind.

Safety is also an issue that is well addressed in most trimarans. The R60’s construction is foam sandwich with many watertight bulkheads making it essentially unsinkable.