Skip to content
You are here
Home > Advertorial > Quantum Sails: A test laboratory to die for 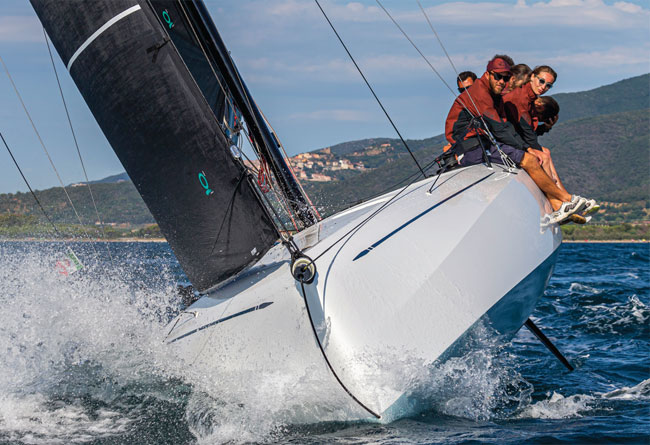 The ClubSwan 36 is the latest design to benefit from Quantum Sails’ refined, sophisticated sailmaking process that distils a ton of complexity down to an end product that is fast, durable – and surprisingly easy to use.

What do you expect from a new set of sails? While top quality and value for money are very probably high on your wish list, what most people really want are sails that perform well the very first time and then keep performing hoist after hoist. Quantum Sails’ iQ Technology and design process are a major change in the way sails are conceived, designed and made.

It’s easy to promise sails that are fast straight out of the bag and plenty of sailmakers claim to do exactly that. But how many of them can back up those assertions with a coherent and demonstrable process? Quantum’s unprecedented iQ Technology and design process is the result of more than 25 years of experience paired with the best sailors, sailmakers and designers in the world.

It draws on this expertise and understanding of how to design and build not only the complex engineered structures that make up today’s high-tech racing sails, but also the rigs and spars that work in tandem with the sails to achieve the perfect shapes that make a boat go fast.

‘It’s a powerful methodology that melds predictive technology, advanced 3D modelling, complex computations and virtual testing,’ says Ed Reynolds, president of Quantum Sails. ‘We are able to establish and refine the aerodynamic performance and structural requirements of the proposed sail before sending the precise build data to the manufacturing team, whose construction process uses tolerances measured in fractions of millimetres.’

The concept for iQ Technology was originally born out of the company’s need to test and validate the sails designed and built for its high-profile Quantum Racing team, which has dominated the 52 Super Series for the last 10 years. The platform quickly became a testing ground and source of empirical data that fed directly back into the iQ software.

But it’s not only the Quantum Racing team that has benefitted. ‘The beauty of iQ Technology and our approach to design is that everything we learn from each project whether it is a sail for a customer’s existing boat, the mainsail for the American Magic AC75, or a new design for one of our boatbuilding partners, all feeds into the system’s skills and knowledge database and can be applied to work we do with all our clients,’ he says.

A strong example of this can be seen over the past four years with Quantum-powered teams in the 52 Super Series where the company started an information sharing initiative with other Quantum-powered programmes, which have included Platoon from Germany, Gladiator from the UK, and Onda from Brazil. Not only was collaborative data used to design superior sails, they shared realtime information and parlayed it into a coaching programme that resulted in dramatic improvements for all crews involved.

Those successes along with the associated accumulation of knowledge and expertise has caught the attention of not just racers, but boatbuilders as well. When Nautor’s Swan began to develop the concept behind its all-new ClubSwan36 onedesign platform, the company turned to Quantum Sails to apply their approach to the development of the sailplan as well as the unique rig geometry for the sporty new 36- footer. The result of that collaboration was a boat that exceeded the performance expectations of its builder and designer from its very first sea trials.

‘The sail package was an important part of the ClubSwan36 project. As much as the foil development, we asked for a rig/sails combination giving lots of power in the light air with the ability to be easily depowered in the breeze,’ says Philippe Oulhen, ClubSwan product line leader. ‘All that with only two headsails and two kites in front of the mainsail, from 0 to 30 kts TWS. Quantum Sails put a lot of effort in this development, in a loop process with the design office and their team and iQ Technology, leading to a perfect result.’

Another major industry player that has partnered with Quantum Sails to great effect is the American boatbuilder, Island Packet Yachts. They credit Quantum’s help with the sailplan and rig design of their new IP 349 cruising boat as a major factor in it being named Boat of the Year by Cruising World in 2018.

Looking to the future Reynolds sees collaborations with yacht designers and manufacturers as an increasingly important opportunity for Quantum Sails to leverage its considerable amassed knowledge, experience and expertise.

‘These opportunities to collaborate one-on-one with boat and mast designers, as well as the sailors, during the early stages of a boat’s design are when we can really add value and help shorten the design process and ensure the boat sails to its maximum potential as quickly as possible,’ Reynolds says.