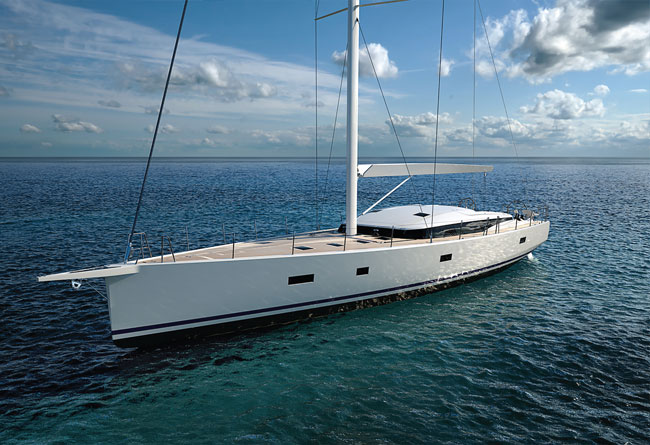 How do you improve a yacht that’s been a runaway success and is well on its way to becoming a modern classic? At CNB Yacht Builders, the luxury arm of Group Beneteau, the favoured approach is to keep on building their flagship CNB 76 while introducing some carefully developed refinements. ‘After six years of production we still can’t see an end of life for this boat,’ says Christophe Harvey, product manager and design engineer at CNB. ‘We have sold 26 of them, there is still very high demand and the boat is becoming iconic.’

A Mk2 version is now in production but there are no changes at all to the yacht’s hull, keel, rudders, deck or superstructure – Philippe Briand’s elegant and diligently researched design has stood the test of time. ‘The most obvious difference is that we’ve integrated a bowsprit into the hull as we’ve done previously on the CNB 66,’ Harvey says. ‘This makes the yacht even more elegant and allows you to put the tack of your downwind sails 1.8m further forward.’

Briand is overseeing the refinement process. ‘We want to make sure that he keeps overall control of the design,’ Harvey says. ‘It’s a close collaboration: we listen to our designers’ guidelines and then the engineers in our design office make it happen.’

Another new feature is CNB’s lowenergy air conditioning system, which is unique in the market at the time of writing. It can run overnight in all four cabins off the battery inverter without needing to start the generator. With a standard-size battery bank, you get a whole night of silence undisturbed by the drone of a generator. This system was first trialled and proven on the CNB 66 and has now been deployed on the CNB 76 too.

A further modification is an upgrade of the yacht’s mainsail winch. ‘The Harken ST70 was perfectly adequate for the loads,’ Harvey says, ‘but we felt that upgrading to an ST80 could lower the sheet trimmer’s stress levels in some situations and provide a bit more comfort.’

The CNB 76 is designed first and foremost to be a cruising boat. It’s a proper deck saloon yacht with a cockpit designed for lounging and the companionway offset to starboard. ‘But a very important aspect of the design is that on the day when you want to race, the boat is competitive and lots of fun to sail,’ Harvey explains. ‘Most large yachts are designed to look like racers, with a classic setup – symmetrical deck layout, flush deck or very low-profile cabin top and so on. When you try to cruise those boats, you soon realise it’s not ideal. We approached this problem the other way round, designing a cruising boat that is a lot of fun when you want to race.’

It must be said that the CNB 76 is remarkably fast in light airs: six to eight knots is enough breeze to turn the engine off and you can easily make seven knots upwind in those conditions. Despite the two rudders and twin wheels the helm is sensitive, provides the right amount of feedback and gives you fingertip control. The steering system is entirely mechanical with Dyneema lines providing the linkage between the rudders and wheels. ‘We definitely didn’t want to use hydraulics, which would have deadened the helm,’ Harvey says.

Will the bowsprit give the new Mk2 version a performance advantage downwind? That remains to be seen. It does allow greater separation from the mainsail and potentially allows owners to fly a larger spinnaker but it will be interesting to see whether anyone dares to buy a bigger kite than the 540m2 sails flown by some of the Mk1 boats. The best real-world performance figures thus far are actually from hull number one, which has logged 24 kts and averaged 17 kts over two hours during a regatta.

CNB is encouraging and helping its owners to participate in the Rolex Maxi World Cup. ‘Last year we had three CNB 76s competing,’ Harvey says. ‘They made up half of the minimaxi fleet and enjoyed some very close racing. The owners had a lot of fun and now they are planning to return with professional crews on board. We’re likely to have six boats competing this year at Porto Cervo, which would make the CNB 76 the biggest class in the regatta.’

The shipyard also hosts an annual rendezvous for its owners in mid- June, in Calvi this year, with an informal regatta and lavish parties. The yard provides the full support of a large after-sales service team based in Bordeaux – 15 people in total including three who are completely dedicated to CNB owners. Every boat has a nominated service manager to ensure owners get the best level of service. This event is more like a family gettogether with a relaxing and pleasurable feeling on board the yachts all together.

To sail the boat efficiently in racing mode you need a minimum of six crew and a maximum of 12, Harvey says. But in cruising mode it can easily be handled by just two people. It is designed to be driven by a professional crew, so that owners can charter their boat to generate a bit of income. There is separate crew accommodation, a nav station in the galley, a way into the engine room without disturbing the guests and a deck hatch that serves as a separate crew companionway

About two-thirds of CNB 76 owners employ a crew of two: a captain and a hostess. The rest of the owners are experienced sailors who like to run the boat themselves when they are on board. They tend to just have a captain and to hire extra crew for delivery passages.

In charter mode, the CNB 76 normally sleeps six guests in three cabins with the captain in the aft cabin and the hostess in the forepeak, but it’s possible to accommodate eight guests in comfort if necessary. The captain and hostess are often a couple and can share the forepeak, leaving the double aft cabin for additional guests. Alternatively, the two main guest cabins amidships can sleep three guests each: there’s an extra pullman berth in the portside cabin and the lower bunk in the starboard cabin can extend to make a big double berth.

While it’s true that the charter market – like the new boat market – is currently seeing far higher demand for motor yachts than for sailing yachts, the demand for CNB 76 charters is remarkably high. Four of these yachts are currently available: one that offers seven-week seasons in the Caribbean and Mediterranean and three boats that just offer ten weeks of summer charters in the Med. All of them are usually fully booked a year in advance.

‘The demand for these boats is so high because the design of the CNB 76 makes it look so comfortable and elegant,’ Harvey says. ‘It delivers full levels of comfort both outside and in. You never, ever get the impression of going down into a cave, like so many sailing yachts and you get a perfect view out, wherever you are. Also, the interior design by Jean-Marc Piaton and Rafael Bonet achieves the perfect balance of white and wood, which makes the ambience inside the boat inviting and very comfortable.’

The CNB 76’s standard layout is smart and successful. Although this is a semi-custom yacht, the layout was extensively studied and most owners are happy to leave it largely the way it was conceived. Some do want modifications, for example changing the orientation of the bed in the owner’s suite from forward-facing to aft-facing to gain a feeling of extra space, or swapping the seating on the starboard side of the saloon for a desk and a sideboard. ‘The only real limit is that we can’t move the structural bulkheads,’ Harvey explains, ‘because that would affect our production schedule and the delivery time of the yacht.’

CNB 76 owners have made some significant voyages. One has sailed up to Spitsbergen from the Med and is currently on the west coast of the USA, planning to cross the Pacific next year. Several others have made long blue water voyages and the next boat to launch is probably headed south to Patagonia and beyond.

The CNB 76 and its smaller sister, the 66, might look similar on the water but they’re designed for very different types of people. Nearly all CNB 66 buyers are experienced yacht owners, brand loyal to Beneteau, who are moving up from yachts in the Sense/Oceanis range. CNB 76 owners, by contrast, are mostly people who haven’t owned a sailing boat before and who want the reassurance of a captain and crew.