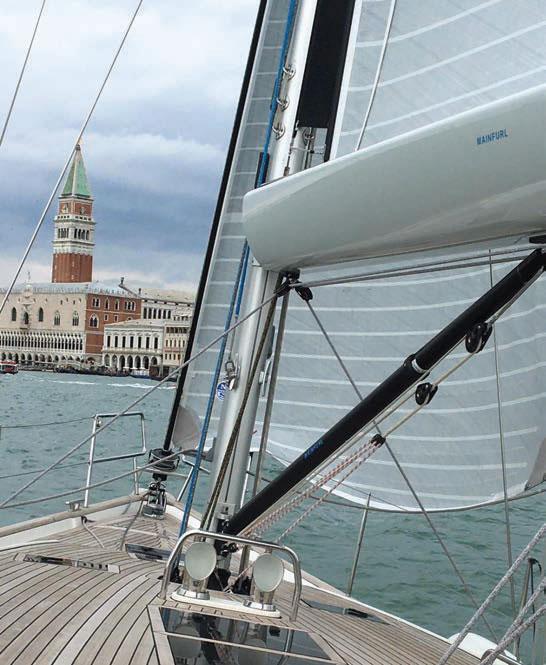 Modern in-mast and in-boom furlings systems really can allow you to enjoy the right sail shapes… (but not all of them!)

Mainfurl is the brainchild of Steen Kjolhede and his stepson Peter Westfal from Denmark. Steen is an ex-Olympic Finn sailor who has a lifetime of experience working on or around boats as a sailor, naval architect, sailmaker and sparmaker, whilst Peter also has more than 20 years’ experience as a sailmaker working for Elvstrøm and North. Together they have set out to revolutionise the furling boom industry with a focus on making safe, reliable and elegant furling booms that are also available for smaller yachts.

They founded the company in 2019 along with two other partners, CEO Claus Hulegaard who manages production and strategist Carsten Mikkelsen who is head of the board. Together they first targeted boats in the 40ft to 60ft size range, quickly building links with the world’s major spar-makers whose products are typically aimed at the 55-foot-plus market segment. They now have eight boom moulds, which enables them to select a mould that is ideally sized for boats ranging from 35ft all the way up to 90ft.

Booms of any size can be made from either fibreglass or carbon fibre, with the carbon fibre option equalling the weight of a non-furling aluminium boom and the glassfibre adding about 20 per cent of the total boom weight. Each boom is custom made to order with reinforcements added internally wherever needed to take loads from the mainsheet or any other attachments, and as a result a Mainfurl boom can be retrofitted to any existing boat.

Most furling booms require you to go head-to-wind whilst hoisting the sail, including when you might take a reef in our out, but Mainfurl has designed its system to allow reefs to be taken in and out on a reach with the mainsheet well eased, enabled by a flexible section of mainsail track close to the clew.

Traditional furling booms have looked slightly cumbersome, but this large selection of moulds and carefully designed “rounded V” profile leads to a boom that is barely any larger than a non-furling boom.

The systems are particularly well suited to multihulls that often have booms fitted high above the deck, such as many cruising catamarans, but the product is slim enough that it doesn’t look out of place on sportier boats.

Mainfurl has partnered with Reckmann, who produce hydraulic and electric drives for them. These drives are recommended for boats over 55ft in length due to the high loads in the furling line needed to maintain luff tension above that size. For boats under 55ft in length electric drives remain an option for those looking to make life easy. Mainfurl produce their own vang system for smaller boats and typically recommends hydraulic Reckmann vangs for larger boats.

Westfal has worked with North Sails to ensure the system leads to as efficient a sail shape as possible, and he races regularly on an X-50 fitted with a carbon fibre version with a 2:1 outhaul option, allowing him to test and develop his own products’ performance credentials. The owner of the X50 in question has switched from having separate racing and cruising mainsails to having one main on a furling system used for both cruising and racing.

The change has led to no noticeable drop-off in performance, and crucially the owner can now cruise shorthanded in safety one day and race with a crew the next day without having to change sails.

This solution is not designed for grand prix level racing, but it can enable those of us with cruiserracers to spend more time on the water enjoying our boats and less time worrying about how to manage racing sails with a small and/or inexperienced crew.