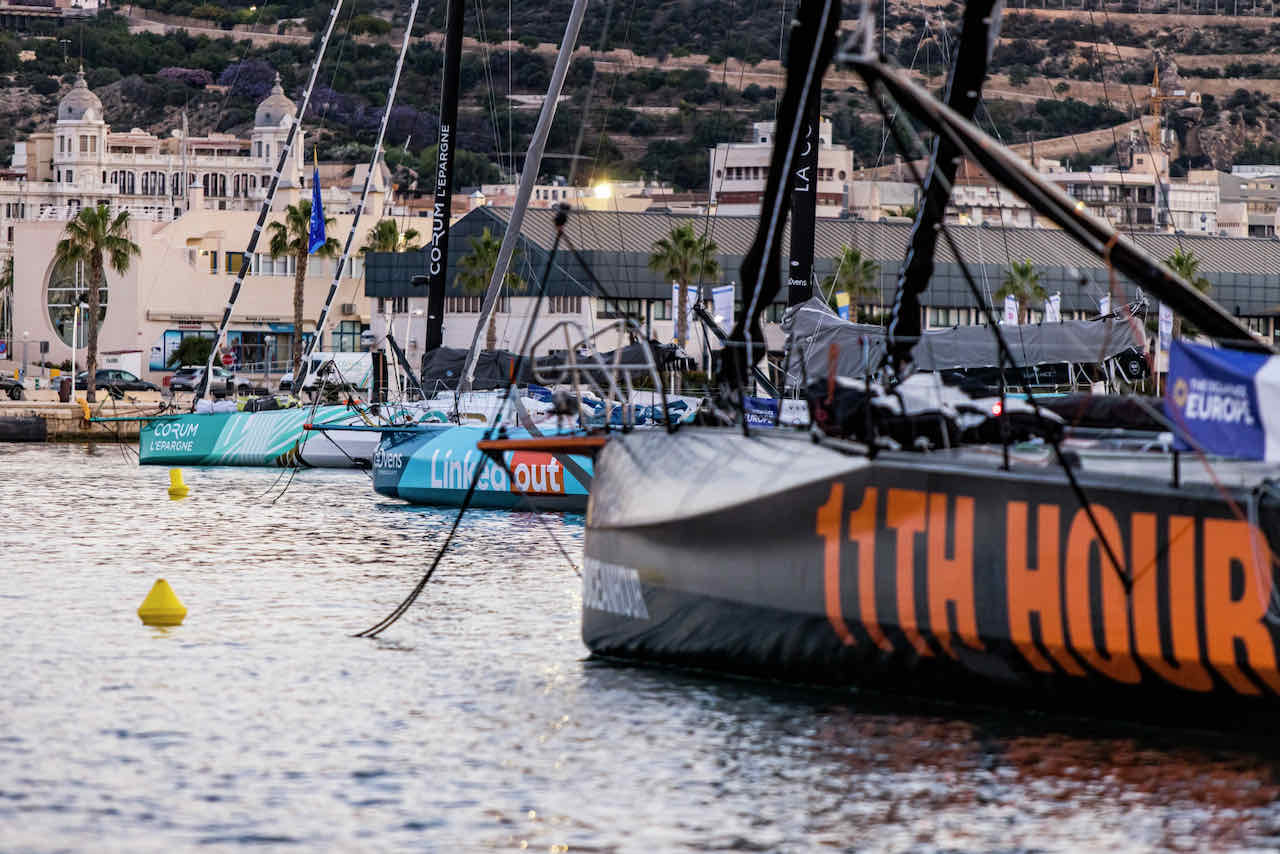 The 12 international crews competing in the inaugural edition of The Ocean Race Europe will leave Alicante, Spain on Sunday June 13 bound for Genova, Italy, on the final stage of the new three-leg offshore event.

The fleet of five IMOCA 60 and seven VO65 high-performance ocean-going yachts representing nine countries and crewed by professional sailors from across Europe and around the world arrived in Alicante on Wednesday after a three-day passage from Cascais, Portugal on leg two.

Previously, the race’s first leg saw the fleet race from Lorient, France across the Bay of Biscay to a virtual turning mark out in the Atlantic before reaching Cascais.

So far the racing has been incredibly close in both the identical one-design VO65 and the open design rule IMOCA 60 classes. All seven VO65s finished within six minutes after three days of racing on the first leg, and there was a photo finish for first place in the IMOCAs at the end of the four-hour Mirpuri Foundation Sailing Trophy coastal race in Cascais.

Now, with the race about to enter its final offshore phase with the 600-nautical mile (nm) / 1,100-kilometre (km) third leg from Alicante through the Mediterranean to Genova, Italy scheduled to start on Sunday at 1300 CEST / 1100 UTC, there is virtually nothing separating the top three teams in both classes.

In the VO65s Mirpuri Foundation Racing Team (POR) and AkzoNobel Ocean Racing (NED) are first and second – both on 11 points – after the two teams match raced each all the way across the Mediterranean to lead the class into Alicante less than half an hour apart. Third on leg two and also third overall, just one point behind the top two, is the Polish-flagged Sailing Team Poland.

However, the scores remain close further down the rankings too, with several teams in each class still capable of challenging for the overall title with a good result on leg three, and in the final coastal sprint race scheduled for June 19 in Genova, where bonus points will be awarded to the top three finishers in each class.

The course for leg three takes the fleet out of Alicante to a turning mark near Tabarca Island, just off the coast, before freeing the teams to head to the finishing line off the Italian coast at Genova, with no other restrictions.

Mediterranean weather conditions are notoriously changeable and unpredictable at this time of year and on leg three the crews are likely to have to deal with any combination of strong winds, flat calms, and whatever else the weather gods choose to send their way.

Having spent their time since arriving in Alicante on Wednesday catching up on lost sleep from the second leg and tending to their boats, the 12 crews are now preparing themselves for the upcoming final leg, which is expected to be a test of both their mental and physical fortitude.

“Of course we are very happy to be in the lead today, but the forecast is very challenging for us. This boat likes strong winds and the forecast is light,” said LinkedOut skipper Thomas Ruyant. “So all the teams are dangerous for us – nobody is out of it. All boats can win. But we are very motivated to finish the race well.”

“We will need to be very patient, not too greedy and be prepared for comebacks through all the transitions,” said Robert Stanjek, the skipper of second-placed Offshore Team Germany. “The fleet is going to compress and stretch many times. It’s difficult for risk management for sure. It’s equal points for the top three teams so I think it is possible!”

“The weather looks very tricky, really difficult,” said 11th Hour Racing Team’s navigator Simon Fisher. “It’s going to be a case of joining the dots to link up what little wind there is. For the start it will be reasonable but to the north it is very light, so the direct course looks difficult.”

In fact all of the sailors had similar assessments – good breeze for the start and then a very challenging few days as they try to put miles under the keel to get north. In the VO65 fleet, the challenges are the same.

“We will have good conditions to start but then we have some very light and tricky conditions to go through,” said Mirpuri Foundation Racing Team skipper Yoann Richomme. “The race is open. At least three or four boats can still win this and we will need to fight for it.”

“We had a good debrief yesterday,” said Australian Olympian Chris Nicholson, skipper of the AkzoNobel Ocean Racing VO65, and a veteran of multiple around-the-world races. “We have had some speed issues in the last week and we are working our way through that.

“This next leg is going to be predominantly light air and quite tricky sailing. I think that suits us pretty nicely. We have got good smarts in that department and hopefully our speed deficit won’t play much of a part in it.”

Meanwhile, Sailing Team Poland skipper, Bouwe Bekking – the legendary Dutch around-the-world racer who raced his eighth edition of The Ocean Race in 2017-18 and is hoping to be on the start line in Alicante at the end of next year for the 2022-23 race – said he believed his crew, which includes some experienced old hands and several young rising stars of ocean racing, had the potential to challenge for overall victory.

“I think we have several strengths,” Bekking said. “I think we sail the boat really well and I think we made the right tactical choices so far. In general, I think we’ve done pretty good things, and have led the fleet for a fair bit.

“I hope, ideally, that we get quite a bit of breeze, because I think then we have really good speed compared to some of the other teams. Then you still have to make the right choices. In that sense, I’m confident that we that we can do well and end up on the podium. And of course there’s even a fair chance that we can win, because we’re only one point behind the leader.”

Further down the fleet, a legend of the sport will be joining the Viva Mexico team, who have added navigator Juan Vila, a winner of the Volvo Ocean Race in 2001, and the America’s Cup in 2007 and 2013.

Based on the latest weather forecasts the fleet is predicted to complete the leg three course in four days and so is expected to arrive in Genova on Thursday June 17.

Follow the racing on the live tracker at https://www.theoceanrace.com/en/europe/racing/tracker

The final competitive action of The Ocean Race Europe will be a short, coastal race along the Italian coast, scheduled for Saturday June 19. With the points so close in both classes, and likely to even get closer by the end of leg three, this coastal sprint could well decide the final overall standings.