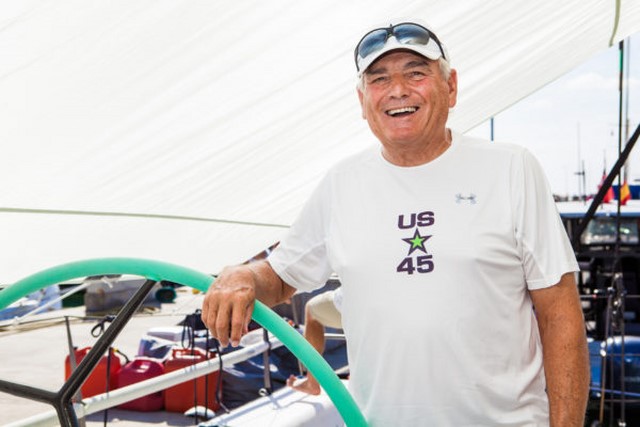 A look back to a profile we put together a few years ago of American Maxi 72 owner/skipper Hap Fauth – now one of the primary backers of the US America’s Cup challenger syndicate American Magic.

Hap Fauth fell in love with sailboat racing at the tender age of seven on the waters of Great South Bay off Long Island. Now aged 71 and the head of a successful business empire, Fauth remains as captivated by the sport as he ever was.

These days however he races on considerably bigger boats than the diminutive Beetle Cats and Penguins he cut his teeth on at the Babylon Yacht Club. In in September of 2017 he and his 19-strong crew aboard the Maxi 72 Bella Mente pulled off their second consecutive world championship victory in Porto Cervo, Italy.

Fauth still steers his own boat but now employs a thoroughbred line-up of pro-sailors of the likes of tactician Terry Hutchinson and crew boss Mike Sanderson to help him perform at the top level in regattas across the Unites States and Europe.

A renowned captain of industry and an iconic figure on the yacht racing world stage, Fauth is well known for his geniality and approachability. Not too surprising given that ‘Hap’ is an abbreviation of ‘Happy’ – his mother’s pet name for her son as a small child.
Fauth says he remembers his early competitive sailing days fondly.

“I grew on the Great South Bay, Long Island – that’s the body of water between Long Island and Fire Island – and I raced there from the time I was seven. My father was a very good golfer but he stopped playing and spearheaded a group at the Babylon Yacht Club to build 35 Blue Jays.

“So us kids went from learning to sail in Beetle Cats and Penguins – they were kind of the Optimist of the day back then – straight into the Blue Jays. We got really into it and we got quite good at the racing.”

Well and truly bitten by the sail racing bug, when Fauth turned 13 he started working after school packing sails for a local loft, Hard Sails. Meanwhile he was sailing every chance he got. He won his local division in the junior Midget Cup three times and finished second in the Sears Cup – a US national junior competition.

After serving his time in Thistles, in his late teens Fauth graduated to bigger offshore boats, sailing with the likes of the Bill Ziegler on his 49-foot yacht Gem. He captained the sailing team at Georgetown University where he also played football and majored in finance.
When he left university Fauth pressed the pause button on his competitive sailing to concentrate instead on his business career.

“When I went to work for City Corp after college I stopped sailing. I came out to Minneapolis to build a business for City Corp and then ultimately started my own business there and after that I was basically working flat-out.

I got married my early 30s and we had kids, so I got them sailing in Lasers in the summertime up in Rhode Island. The only racing I did was ice boat sailing on the lakes in the winter.”

Fauth eventually returned to yacht racing in 2003 with the launch of Whisper a 120-foot Hood/Fontaine designed superyacht in Amsterdam.

“I started racing doing Bucket Races with that and we did quite well,” Fauth recalls. “I kind of got the bug again and one time when we were over in Saint Tropez putzing around on a beautiful day I saw Sotto Voce [a Dutch owned Judel/Vrolijk 62] and fell in love with it. I made an offer on the boat, which I didn’t ever think the guy would accept, but amazingly he did.”

Fauth shipped his new boat back to the United States renamed it Bella Mente – the previous owner declined to sell the name with the boat – and put together a half Corinthian, half professional crew together to do some racing.

On one of the first outings at the Newport to Bermuda Race the 66-foot Bella Mente upset the pre-race form guide with a stunning line honours victory in the 264-boat fleet which included the pre-race line honours certainty a 100-foot state-of-the-art canting keeler called Maximus.

“It was a very light race – more than four days for us. Before the start we put together a very good strategic plan. Everybody believed that there’d be a strong southeaster coming in and the fleet would come into Bermuda on this breeze.

‘So the whole fleet went out to the east, but the breeze never materialized and they all ended up sitting out there. Meanwhile, we went up the rhumb line and got there first. It was the first time in 40 years that a boat under 70 feet finished first.”

Unsurprisingly, that victory remains one of Fauth’s most memorable races.

“I would say it was my first major victory in the Bella Mente family and an outstanding race for all of us on board. It was the 100th anniversary of the race so there were about 300 boats. Such a great thrill to finish first in a fleet that large.”

The troublesome commissioning of the second Bella Mente, a Reichel/Pugh designed 69-footer, Fauth says with a sigh, “taught me a lot about the workings of velocity prediction programs”.

“I kept asking them, ‘Don’t you think we should go in the tank to verify some of your conclusions from this VPP shape that you’ve come up with?’ They kept telling me they didn’t need to do that, but as it turned out that boat couldn’t hold a line worth a damn. So I had to rebuild the aft 30-feet of my brand new 69-foot yacht. As I tell people, I paid for two boats and got one.”

Nevertheless, the modified hull proved to be a huge improvement and Fauth and his crew had a successful European season culminating in a win at the Mini Maxi World Championship.

For the third and current Bella Mente, Fauth turned to Judel/Vrolijk with the exacting brief to design him an uber-boat that was both good offshore and around the buoys. [Ed. note – the latest Bela Mente Maxi 70 launched in late 2018 and is undergoing sea trials in the US]

“You know how tough that is to achieve, but I think we have basically gotten as close to that ideal as you’re going to get. The boat will do 30 knots – it just gets up and goes. It’s really fun to race around the buoys and I believe we’re the strongest boat offshore. That’s why it’s my favorite boat.”

Over the years Fauth has assembled a squad of professional sailors large enough to mount two Volvo Ocean Race campaigns simultaneously. Ashore the sailing team is backed up by an equally professional and similarly-sized technical and logistics team.

He runs his sailing team the way he manages his businesses, with a heavy emphasis on preplanning and preparation and plenty of honest analysis of what is working well and what is not.

“I built the sailing team the same way I built my companies. Respect is the main ingredient in that I treat everyone well and there are no ‘stars’ on the boat. I hold everybody accountable but we win, lose or draw together.

“I love to practice and so we probably do more of that than anybody out there. The idea is no mistakes. Execution is what it’s all about. We don’t have any bitching, moaning, or second guessing. If we make a mistake, it’s all about recovery. There’s a lot of teamwork and then questions like: How do we get better? What did we learn today?

“We’ve steadily built a team of guys that all bring a lot to the table in terms of experience and expertise so now we have a good time when we’re racing. There’s not a lot of screaming and yelling on board. We’ve had guys that didn’t fit the Bella Mente profile and they got booted.”

As any raceboat owner will tell you, this kind of on-board utopia is easy to strive for but hard to achieve. How, for example does Fauth manage the egos of 19 of the world’s best paid sailors together on one boat?

“Everybody understands how it all works on Bella Mente. I’m a very good overall team leader and Terry’s a very good leader as a tactician as is Mike as strategist. It works out very well because I basically say I’m just like everybody else on the boat. I have a job. I’m the helmsman. Terry’s the tactician. Mike is our strategist. The trimmers and everyone else all do their job.”

After racing the entire Bella Mente crew – Fauth included – spend an hour or so with team coach, James Lyne, going through every single maneuvers. They take apart every tack and gybe and dissect every spinnaker hoist and drop to find out if any incremental gains can be made.   It’s a level of professionalism that wouldn’t be out of place at the America’s Cup, but according to Fauth it typifies what is required to run a successful Maxi 72 campaign.

“Racing on this circuit is not an inexpensive endeavour,” he comments. “You’ve got a crew of 20 including yourself and a traveling team maybe of 27 including a sailmaker, a chef, a hydraulic winch guy who takes care of all the moving parts and the boatbuilders who get on board to fix carbon fibre when you get off. In many ways we operate in the same way as a NASCAR team does.”

Not inexpensive is an understatement. A new Maxi 72 can cost up to five million dollars and according to Fauth annual running costs on sails, transportation, accommodation and crew wages adding up to roughly the same again.

Undoubtedly Fauth could afford to spend his money on any number of alternative recreational activities but he says only yacht racing really lights his fire.

“I’ve been doing it all my life. I’m obviously passionate about it. I love the team aspect of yacht racing and the fact that it’s different every race and every day and every year, which makes it very exciting.

“That’s what keeps me coming back.”