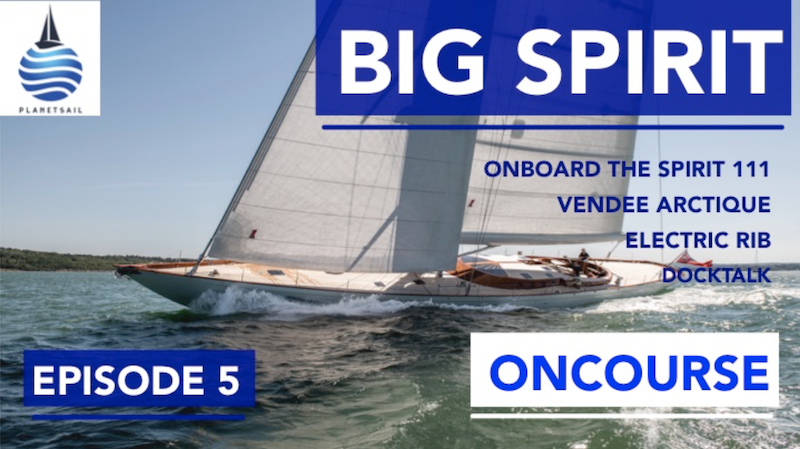 The fifth episode of OnCourse from Matt Sheahan’s PlanetSail is out now….

Earlier this year in Episode 3 we went to see Spirit Yachts on the east coast of the UK. While we were there we took a look at the stunning Spirit 111 as she slipped into the water. As we watched we said we’d report back once she was sailing. Well, now she’s up and running and I was lucky enough to be invited aboard to have her all to myself for the day…Oh yes!

So, what is this remarkable, innovative and striking eco-friendly superyacht like and why is comparing her to a classic J Class from the 1930s is so relevant? Watch here to find out.

From cruising to flat out racing, in this episode take a look at what the IMOCA60 skippers were really saying as they hammered their way from France to Iceland before trickling their way back in what turned out to be an incredibly close race.

Plus, we find out how one of the world’s leading dinghy manufacturers is leading the way in electric motorboats. And on top of all of that there’s another serving of Docktalk. So, pour yourself a cold one, sit back and enjoy!

Spirit Yachts 111
She’s the size of a J Class yacht but requires just a handful of crew to sail her. In fact, for our trials there were just five of us aboard and I did little other than film and steer…lucky me!
And while she’s an impressive yacht to look at and sail, when you head below decks she is simply something else.
Dig further behind the scenes and you find that she’s a boat with some serious green credentials including an electric propulsion system that re-generates power under sail.
This was a fascinating boat to get my hands on and a rare opportunity to have a beast like this all to myself!

Vendée Arctique
With the Vendée Globe just around the corner and with so little racing or training having taken place during the build up, the race to Iceland and back was always going to attract attention. You may have seen the features we covered during the event which gave a taste of the needle match.
What we couldn’t bring you in the heat of the moment were the translations from the French skippers that made up the bulk of the fleet. But now we can.
So, to find out what they thought about the race as the upwind leg shook their fillings out and the downhill amble drove them to frustration, check out the official wrap up film.

RS Pulse 58
For decades RS Sailing have been among those leading the charge in the development of high performance production racing dinghies and small keelboats. But now they are making their name for a breakthrough, all electric RIB with a very smart brain.

Docktalk
More news and snippets and chatter from the scene.