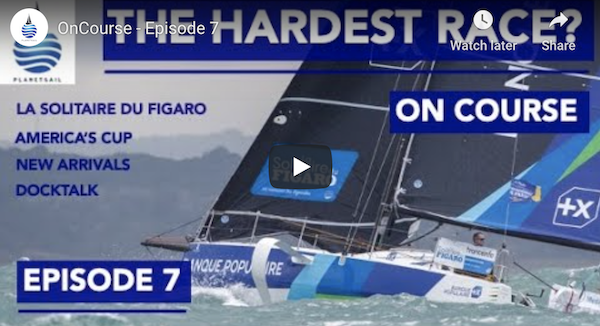 Ahead of the biggest solo race of them all, PlanetSail’s Matt Sheahan takes a look at the recent Solitaire du Figaro, the proving ground for so many offshore rock stars in the making.

As well as this year’s race he talks to some of the offshore legends at last year’s Figaro, during its 50th Anniversary.

Plus, Matt checks in with the America’s Cup as the new boats arrive in Auckland ahead of the first race for the radical AC75s. And there’s more as Docktalk takes a look at green resins, blue water and a very cool maxi cruising cat.

La Solitaire du Figaro
Winning the Solitaire du Figaro is harder than victory in the Vendee Globe, the non stop single-handed race around the world according to Michel Desjoyeaux. This French celebrity sailor is the only person to have won the Vendee Globe twice, so he should know. In a special and exclusive feature we report on this year’s Figaro while also heading to the heart of the action at last year’s 50th anniversary to talk to some of the world’s greatest offshore sailors, all of whom had turned up for another taste of the toughest single handed offshore series in the world.

America’s Cup – New Arrivals
As the clock counts down towards the first race with the radical new AC75s, the Brits and Italians fly in their, yet to be tested, race boats. American Magic have their second boat in Auckland already and are working to be the first afloat once again with the latest version of this extraordinary class. Meanwhile, the Kiwis continue to scorch around their home patch.