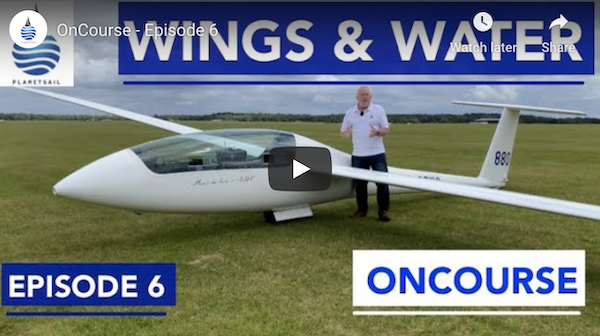 Flying and high performance sailing have never been closer and in the latest episode of PlanetSail’s On Course Matt Sheahan takes to the air to explain why.

Also on the show….

Wings & Water
As well as being obsessed with boats since childhood I’ve always been fascinated by flight, especially gliding. As an enthusiastic cross country glider pilot for many years I’ve watched the high performance end of sailing converge with gliding to a point that the operating speeds now overlap. The technology and the means by which flight is achieved in both cases have also got closer and closer. So, with the first races on the road to the America’s Cup just a few months away I couldn’t resist making the link in the air before the UK thermals fizzle out for another season.

The world’s largest lake race – Bol d’Or Mirabaud
As famous for its light weather as it is infamous for being one of survival when the conditions let rip, the Bol d’Or Mirabaud is the biggest lake race in the world attracting over 500 boats and over 3,000 crew.
The Covid crisis meant that the 66mile race to the eastern end of Lake Geneva and back didn’t take place this year but PlanetSail was there last year and as well as walking the docks and following the race, we spoke to lake local and two time America’s Cup winner Ernesto Bertarelli who has won the race seven times.

Boat Spotting with Mike Golding
We’ve all done it, walked around marinas and boat yards looking at what’s in and around the dock. And while we might not admit to it, the fact that we are rarely short of a story to tell about pretty much any given boat, the reality is that most of us are closet boat spotters.
So, I decided to come out into the open and invited Mike Golding along for a stroll around Southampton’s Shamrock Quay and Saxon Wharf where we found far more than we had expected.

Docktalk
Composite engineers Gurit have clocked up some serious hours with many of the teams lining up for the next Vendée Globe, plus we find out about a new company, Race Yacht Management, that claims it can save owners a great deal of money.