Skip to content
You are here
Home > TV & Podcasts > PlanetSail: On Course – Episode 3 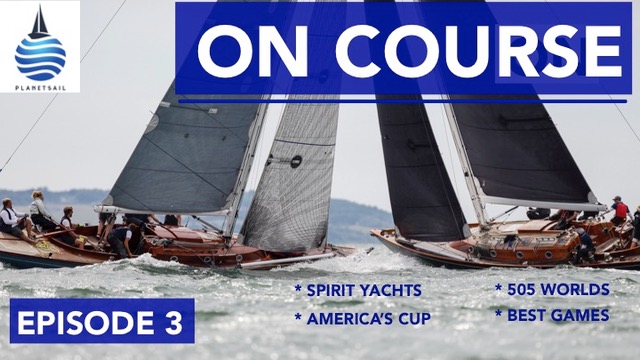 The UK’s lockdown continues, but as PlanetSail host Matt Sheahan discovers, there’s still plenty to talk about in Episode 3 of the On Course series.

For starters, there’s the on going developments with the America’s Cup where two of the four teams have managed to get afloat by using some ingenious thinking. INEOS Team UK explain how they use software to replace time in the wind tunnel and towing tank. There’s also the issue of their boat’s new look as Britannia returns home with an add-on plus, some more cool footage from the Americans.
I admit to getting all misty eyed over a former flame, but manage to compose myself for a trip to a very special yard on the UK’s East coast where Matt Sheahan found a bigger story that he had expected.

Plus, board games and hairdryers!

America’s Cup – What the four teams are up to
The America’s Cup has never been fair, at least that’s been the popular view for over 160 years. It’s hardly surprising, it took 132 years to wrestle the Cup away from the New York Yacht Club and since then the event has been just as controversial as various teams and their yacht clubs have frequently tried to slope the pitch in their favour.
But the current global Covid crisis could make the 36th AC a less even affair again as some teams manage to get afloat while others are held in lockdown.
So, how have two teams got back on the water and what are the other two up to in the meantime?

Amazing Spirit – Spirit Yachts
Over the course of 27 years, UK based Spirit Yachts have become world famous for their elegant designs. We dropped in on their yard in Ipswich and discovered much more than simply a traditional boat builder. It’s been a while since I’ve been to the heart of the Spirit facility and I was blown away by a company that is about much more thank simply building gorgeous boats, but one that has a keen eye on the future.

505 Worlds
Admitting to bias from the outset, I simply couldn’t resist taking a look at last year’s 505 World Championship footage from Fremantle, Australia and drooling with envy. On the plus side, we learn how the top dogs make rig tuning simple.

Board Games
What games have you been playing during lock down? Thousands have been turning to eSailing for their tactical fix, but I’ve been digging around in the attic and found two classic sailing games before ending up playing with hairdryers.