Skip to content
You are here
Home > TV & Podcasts > PlanetSail: On Course – Episode 2 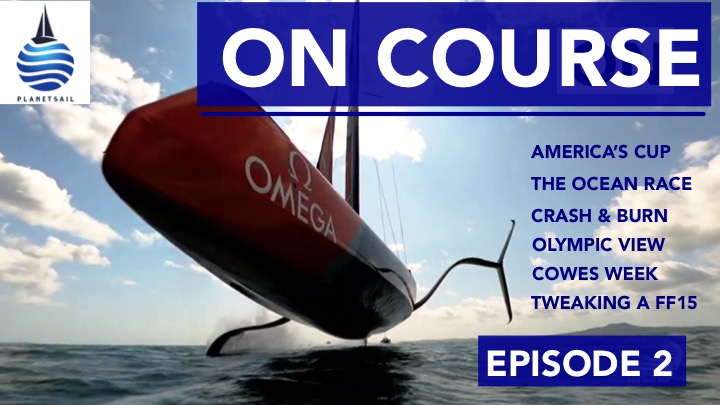 In Episode 2 of Matt Sheahan’s new series from PlanetSail taking a regular look at the sailing world, despite much of the world still being in lock down Matt discovers there is still plenty to report on.

America’s Cup – Kiwi focus
The cancellation of both of the opening America’s Cup World Series (Sardinia & Portsmouth) and the global lockdown preventing teams from doing pretty much anything other than train at home, the America’s Cup like so many other sporting events has gone on hold. In many ways, of the four teams the Kiwis faced the biggest headache with their AC75 stuck en route between New Zealand and Sardinia. Yet the move to build a small test boat after launching their first AC75 looks like it was a smart move in allowing the team to carry on testing, training and developing ahead of their second boat launch. At least it would if they could go sailing. Nevertheless, the Kiwis seem to be ready to get straight back into it once the lockdown is lifted, so we thought we’d take a look at some of the videos they’ve been producing over the last few months the to get feel for what they’ve been up to so far this year.

The Ocean Race course
It was easy to get confused as to where the next fully crewed around the race would go given that the organisers have been announcing the legs for the next race individually. But now the complete course has been revealed.

Whitbread Archive
As the countdown continues towards the next Ocean Race, here’s some fascinating archive of the first two races and links to the official programmes that highlight just how far ocean racing has come.

Cornish Crash & Burn
If you’ve tripped up while racing at Looe Sailing Club in Cornwall the chances are it was caught on video. And while we’ve all been there, it’s still amusing to see other people take a swim too. Here’s a few of the best.

Olympic view
RYA Director of Racing Ian Walker talks exclusively to PlanetSail about how moving the Olympics back a year will affect teams, sailors and campaigns.

Cowes Week Update
While many of the word’s events have been postponed or cancelled, some are still planning to run their events. Among them is Cowes Week one of the biggest events of its kind in the world. We talk to Regatta Director Laurence Mead about the plans for this year’s event.

Small tweak, big difference – how to boost a Flying 15
Earlier this year we ran a feature on the RYA Dinghy Show which included a reference to a brand new Flying Fifteen that had caught our eyes and those of Olympic sailor Luke Patience. Well, it turns out that this is more than just a new boat, but one that has a tweak that could provide a new set of gears for an already highly refined international keelboat. We go behind the scenes in the Lake District to see what lies under the skin of this latest Flying Fifteen.