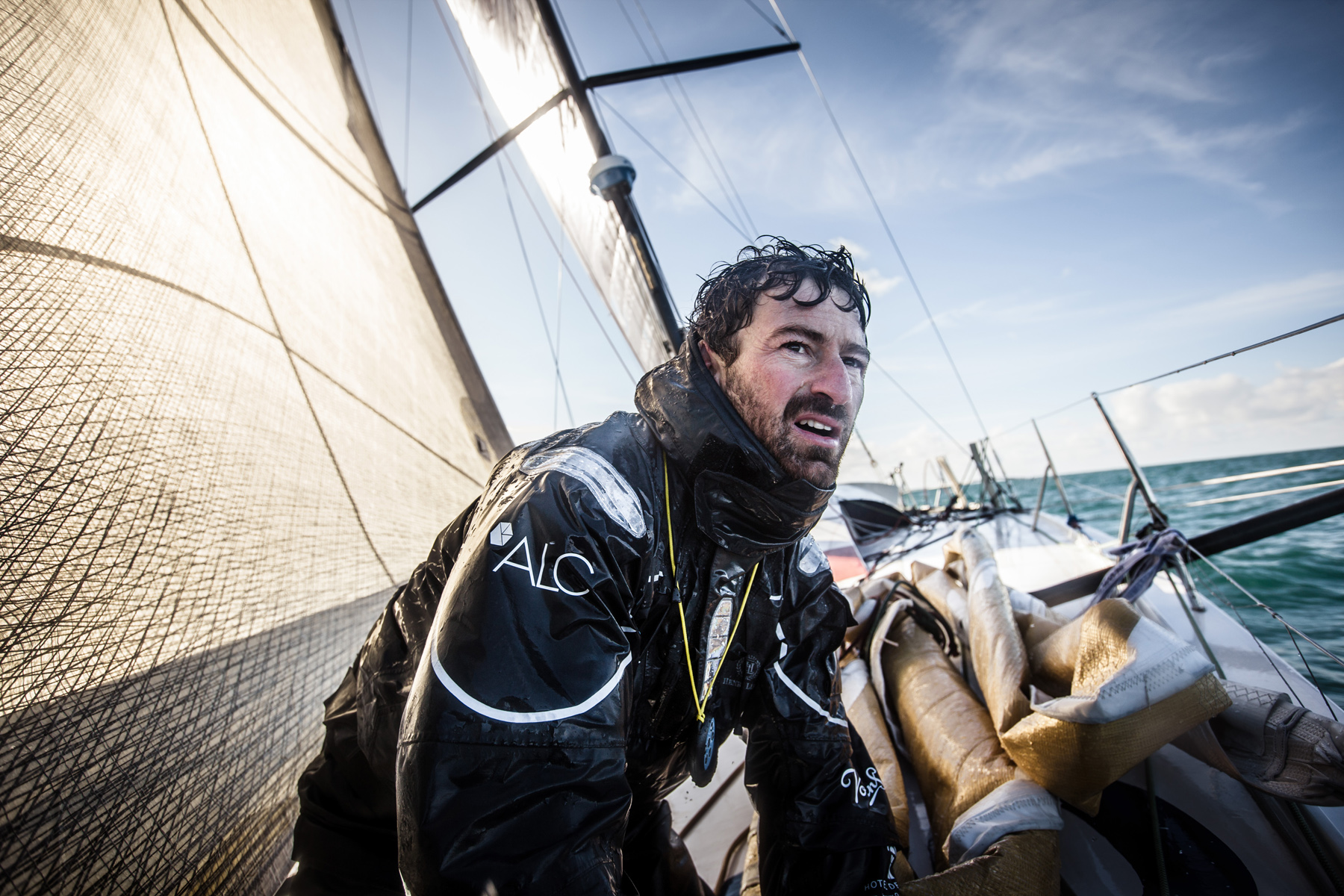 British solo skipper Phil Sharp has established a fearsome reputation in the Class 40 fleet offer the last few years. After a string of podium results and wins during the 2018 season Sharp was recently crowned crowned European champion. We caught up him in St. Malo, France where is busy preparing his mind, body and Imerys Energy Challenge boat to take on the Route du Rhum transatlantic race to Guadaloupe in the Caribbean – a race he won last won in the Class 40 in 2006.

Where are you up to with your preparations for the Route du Rhum start on Sunday?

It’s been pretty busy getting everything prepared. You can never have a boat that’s over prepared. But we are nearly there and we are focusing mainly on the weather right now.

It’s looking like it’s going to be quite tricky for the first few days and a lot depends on how we get through that.

What is the latest weather scenario?

It’s looking like a difficult start for everyone to be honest. The weather conditions in the Atlantic are really quite unstable right now and we are going to have tropical storm Oscar coming up to say hello on Friday. That’s going a bit north of us but it is effectively opening up a corridor for some big depressions that are going to follow Oscar through.

That means we are going to get some pretty nasty windy weather early next week – probably Tuesday/Wednesday. It’s looking like a giant low is going to give us some headwinds and there doesn’t seem to be any way around it. We are going to be going upwind in 40 or maybe 45 knots at one period.

There is a chance that the organisers could bring the start forward to Saturday because of the weather.

How is the prospect of a stormy start affecting the atmosphere amongst the competitors in St Malo?

People are waiting to see how the weather is going to play out and whether it will settle down a little bit. Things are quite uncertain and the forecast is changing quite a lot from day to day. But everyone knows there is going to be a lot of wind and people are preparing their boats for strong weather. People are testing their storm sails and going over how they are going to change down from jibs to storm sails and how to heavily reef their boats.

What is your strategy for the first few days?

Really the key is going to be how to manage to sail cleanly in the first 48 hours or so after the start. That comes down to a lot of preparation and having the confidence to still drive the boat in racing mode despite the windy conditions. It’s going to be really interesting to see how the fleet copes – not just the Class 40s, we’ve got multihulls racing that are used to going downwind and I’m sure they don’t want to be banging upwind in 45 knots.

You are well established in the Class 40 fleet – tell us what it is about the Class 40 that attracts you and so many other solo skippers?

I think what attracts me most about the Class 40s is how close the racing has become now. We have had some incredible competition come into the class since I first started sailing them and that’s because it’s a very accessible class. The boats are not too expensive, they are very fun boats to sail and they go very fast in the right conditions, and it’s a fantastic way to be able to compete in the big ocean races like the Route du Rhum, the Transat, the Transat Jacques Vabre.

This year there is much more competition than we have seen before – t’s been furiously competitive. Now the number of boats that can realistically win the Route du Rhum is probably around 10 – it’s really quite wide open. It’s just a really exciting class at the moment and it’s going places. The boat design is moving forward so the boats are just getting faster and faster. For me it has been a fantastic few years of racing.

The spirit of the class is really positive. It’s a friendly class where if you are missing tools or bits and pieces then normally someone is happy to help you out.

For this race it’s a little bit different because there are so many boats with people that have never done Class 40 before but are doing the Route du Rhum. Not all of them are going to be competitive.

But among the regulars, we all know each other really well and the atmosphere is pretty good.

Can you sum up what the pecking order is in the Class 40 Route du Rhum fleet and where you position yourself in that order?

All the Mach 3 boats – which are an evolution to our boat – will be strong. They are all good boats but they also have good competitive skippers on them who have all got plenty of good Class 40 experience.

There are another two new boats – one launched last year and one this year – which are wildcards in a way because these boats are quite extreme. They are really powerful boats and they look like tanks on the water – quite incredible and pretty ugly too, but they go very fast. The guy who has the latest one of those comes from the Figaro circuit Yoann Richomme and is very competitive.

Sometimes those boats are capable of sailing a knot and half faster than me. That adds up over a 24-hour period and it is going to be tricky to keep someone like that behind you. My boat is five years old now so it’s a matter of really sailing cleanly, not making any mistakes, and pushing the boat right to its maximum potential. If I can do all that then I should have an opportunity to be playing at the front of the fleet.

What information do you have on your competitors while you are racing?

We can download the positions of all the boats every hour. That’s night and day – they don’t have a blackout at night. So I can see where they are and when they change tactics.

It’s really important too to focus on your competitors and where they are as well, so you can balance the risk of [your strategy] against that and the oncoming weather and decide whether you should pursue a tactical option and sail a few extra miles to do that –  at the same time you never want to stray too far from the fleet.

How would you describe your own strategic/tactical racing style?

I’m confident in my boat and that it has good boat speed so I think it’s important not to take too many tactical risks in a race like this. There’s so much going on aboard the boat when you are racing that it’s a matter of prioritising things.

What are your key priorities when you are racing alone offshore?

If the boat is going really well and you are happy with your tactics then you just focus on sailing fast. It’s important to have a game plan – a long term game plan and then a more detailed strategy of what you are doing that day. Then you need to be able to understand the weather well enough that you can have the confidence to deploy that game plan.

Referencing your speed off the other boats is really useful to do. That keeps you pushing each other.

You are out there sailing the boat on your own for two or two and a half weeks but because everyone feels so close around as you are watching their positions and their every move, it feels like you are out there playing a big game of sailing. In a long race like this you really thrive off everyone else.

You have to make sure you don’t get too fatigued. Somehow you need to find a rhythm that enable you to keep the boat going fast as well as being able to make the right navigational decisions.

What are your priorities over the next few days before the Route du Rhum start this weekend?

When you are preparing yourself physically for a race like this you have so many things flying around inside your head on how you have got the prepare the boat.

You know that once you cross that start line that’s it – you will have to make the most of the tools you have got on board and trust in all the preparation beforehand.

Every bit of preparation you can put in beforehand makes you just a little bit better during the race. Even though I can see the days counting down to the start, in some weird way I also feel like the race started several weeks ago.

Are you able to sleep with such a big start coming up?

I haven’t had too much of a problem sleeping at night, but getting into a rhythm where you can switch off during the day and do some power napping has been really quite difficult. That’s down to all the adrenalin in my system and the atmosphere around the race village – and the fact that we have a job list to get through.

Slipping into that sleeping rhythm is something you want to do as quickly as possible during the race. it’s really important to sleep during the day because if you don’t you basically just hit a wall.

To be competitive you have to reduce your sleeping hours to three to four hours in total per 24-hours. The other massive obstacle when you are solo sailing – and the biggest challenge really – is that you can’t sleep for more than 20 or 25 minutes at a time. Otherwise it’s too risky and you would not be competitive enough.

Being able to fit in power naps quickly and efficiently is tricky and you almost have to be very tired before the race starts to get into that cycle. Somehow you really need to settle into the groove as quickly as possible, but that can be difficult in such a big competitive fleet.

You won the Class 40s in the Route du Rhum in 2006 – what performance goal have you set for yourself this time?

My goal is to finish on the podium and I definitely feel I have got the capabilities to do that based on the boat’s potential and my experience with this boat.

As I said, the new boats can be frighteningly quick sometimes so I have to be realistic and I would be silly to say I will only be satisfied with a win. But frankly I don’t see the point of entering a race unless there is a chance of winning.

I will be giving it everything, my absolute best shot – you can count on me for that. The important thing is going to be to push hard and to take advantage of every scenario that comes along. But most of all I have to keep the boat in one piece and sailing at 100 per cent the whole way.

If I can manage that then there is a chance for sure of a podium and who knows – there could be a chance to repeat the winning performance of 2006, which would be amazing.