Skip to content
You are here
Home > Advertorial > Personal taste… 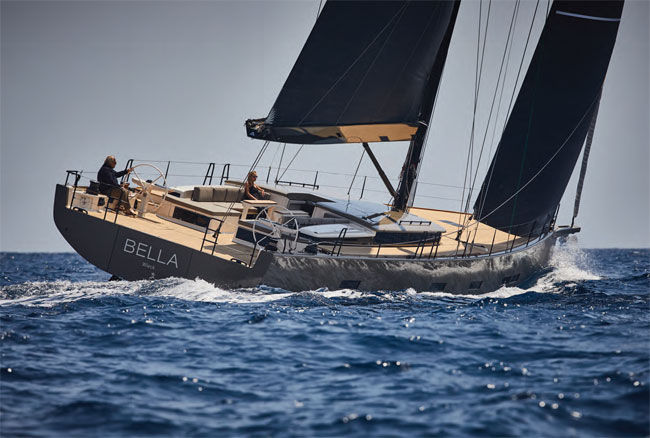 When experienced sailors define their own perfect yacht they often find others have been thinking the same thing. If you have a lifetime of experience in the industry you’re better placed than most to pull it off.

When Michael Schmidt wanted a large yacht to go off cruising with his wife, he found nothing on the market – new or second-hand – that came near to meeting his rather exacting requirements.

Most people in that position would explain their ideas to a designer and commission a full custom shipyard to build the boat they want, but Schmidt went much further than that and founded a whole new shipyard to ensure that he had total control over every aspect of the build.

Unsurprisingly, given Schmidt’s entrepreneurial spirit and keen nose for such things, it turned out that there was a gap in the market for the sort of yacht he had in mind and six years on, his Y Yachts shipyard continues to thrive.

It must be said that Schmidt is neither a typical yacht buyer nor an average sailor. One of Europe’s major yacht broking networks bears his name; his Yachtwerft Wedel produced some of the fastest IOR racers of the 1980s – boats such as Pinta, Düsselboot, Outsider and Container – and he personally won the Admiral’s Cup for Germany in 1985 as skipper of Rubin.

When the Berlin Wall came down he moved swiftly to the former East Germany, founded Hanse Yachts in the historic Hanseatic League port of Greifswald in 1990 and grew it to become the world’s second-largest producer of sailing yachts (and a major-league player in the motorboat market too) before selling the business in 2011.

The fundamental problem that Schmidt perceived with all of the yachts he looked at in 2012 was that they were unnecessarily complicated.

‘The real challenge is to reduce a yacht to its essentials,’ he says. ‘Our credo is: the simpler the boat, the purer the sailing experience and the greater the pleasure. Our goal is clear and simple: use the best technology available to simplify sailing and put the joy back into it. This is why our yachts are made to emphasise the essentials of sailing: easy handling, alone or with company, anywhere in the world.’

One of Schmidt’s most successful innovations during his tenure at the helm of Hanse Yachts was to insist that all yachts produced by the yard, no matter what size, had a cockpit layout that made it easy to sail them singlehanded. Looking back, this might seem like a bit of a no brainer but at the time it was a real game changer for the boatbuilding industry.

At Y Yachts, that concept has been taken a long way further, with yachts up to 90ft (27m) long that are designed to be sailed solo or by a couple. The standard fit-out for all models includes quarters for a professional skipper and crew, separate from the owner’s and guests’ accommodation, but quite unlike most yachts of similar size, Y Yachts are engineered to give their owners the option of cruising without any paid hands on board whenever they wish to do so.

Simplicity aside, two more key parameters for Schmidt’s own yacht and for the shipyard that followed were light displacement and a remarkable turn of speed: ‘Fast hull designs, the latest materials, perfect engineering and outstanding craftsmanship make our yachts suitable for occasional racing as well as for relaxed afternoons at sea.’

Light displacement means carbon fibre and hi-tech composite construction throughout. But for Schmidt, what’s left out is as important as what goes in: ‘The ideal cruiser is the opposite of a heavy yacht overloaded with all possible features. Sailing fun is made possible by a simple boat that is reduced to the bare essentials without sacrificing comfort.’

Performance in light airs is a particularly important part of Schmidt’s overall vision: ‘A Y Yacht must be able to run at a reasonable speed even in the lightest wind without starting the engine. Once you have experienced this, you don’t want to sail any other yacht.’

The final key component of the Y Yachts formula is a strong, original and enduring sense of style, at once timeless and state-of-the-art: ‘A yacht needs her own aesthetic.

Something that distinguishes her from all other yachts, makes her a solitary stand-out in harbour and one that people still like to look at after many years.’

For his own 80ft yacht Cool Breeze and the Y8 model that subsequently went into production as the brand new shipyard’s first semi-custom offering, Schmidt engaged Lorenzo Argento, at that time of Brenta Design, to handle the naval architecture and commissioned Sir David Chipperfield to take care of the interior design.

It was a challenging brief by all accounts, which Schmidt describes as ‘like bringing together several complications in Swiss clockwork: the playful mastery of long distances, the easy handling of a large yacht, excellent performance in all winds, coupled with a high-quality living atmosphere.’

The new shipyard, Michael Schmidt Yachtbau, was established in 2016. Schmidt didn’t ned to venture far from the headquarters of his previous empire, finding an ideal waterfront site at Ladebow on the outskirts of Greifswald and erecting a purpose-built production facility large enough to produce yachts of up to 108ft (33m) in length.

All hulls and rigs are produced on site in carbon fibre and the hi-tech, automated paint hall also serves as a giant autoclave capable of annealing pre-preg yachts at temperatures as high as 90°C.

A yacht’s hull is too often just a small fraction of its overall displacement weight, even before all the gear, stores, fuel and cruising equipment is loaded aboard. With light displacement a fundamental parameter in the Y Yachts formula, nearly all of the yachts’ interior structure and most of the furniture is made from lightweight composite materials but it’s largely concealed under a layer of hardwood veneer to give the accommodation a traditional look and feel.

Three semi-custom models form the bulk of the shipyard’s current output: the 71ft (22m) Y7, the 79ft (24m) Y8 and the most recent addition to the range, the 90ft (27.4m) Y9. A 74ft (22.6m) explorer yacht, the YX, is also available in two different configurations and the yard also produces full custom yachts to order.

Lorenzo Argento designed the first model in the range, the Y8 (developed from Schmidt’s own yacht, Cool Breeze) and the YX, but the highly regarded American designer Bill Tripp was brought in to design the Y7 and Y9 and the Danish firm Norm Architects designed their interiors. To date the yard has built (or on order) 12 yachts. More are already in the pipeline, including plans for a 100ft (30.5m) Y10.

One notable custom build launched last year is the 74ft (22m) oceanic research yacht Eugen Seibold, which was designed by Lorenzo Argento and subsequently developed into the YX model, adding a go-anywhere explorer yacht to Y Yachts’ range. Eugen Seibold was commissioned by the Max Planck Institute and Werner Siemens Foundation with a brief to create the world’s most eco-friendly research vessel.

Fitted with an advanced diesel-electric hybrid drive and sophisticated energy recovery systems including a propeller-driven generator that supplies the yacht’s electrical power under sail and charges its batteries, Eugen Seibold resolves the contradiction inherent in most environmental research vessels, which inevitably pollute the environment that they are working to preserve. This project has given Y Yachts valuable expertise in renewable technologies and has enabled the shipyard to offer the option of eco-friendly systems and drives on all models in its range.

What all of these yachts have in common, despite the extensive scope for customisation that the shipyard offers its clients, is a strict adherence to Schmidt’s key parameters. ‘We have turned away commissions for catamarans and powerboats,’ Y Yachts’ head of sales Peter Markowitz explains. ‘We would far rather focus on building a few very good sailing boats with a maximum output of around five yachts per year. We don’t want to outsource anything and we don’t want to have to change our philosophy.’

One key aspect of that philosophy, which is strongly tied in with Schmidt’s credo of simplicity, pure sailing and pleasure – and one that even the most traditionally minded sailors will agree with wholeheartedly – is the importance of reliability. Hydraulic and electric systems make these huge, powerful boats easy and fun to sail, but all technical installations on board are designed to make access for maintenance as easy as possible and all equipment is selected and installed so that if necessary, it is relatively straightforward to replace or repair.

Many shipyards will give their customers verbal assurances that this is the case, but Y Yachts goes one further with a bold pledge published on its website: ‘We optimise every area of the yacht and you can be sure that you will not experience any surprises at sea. Promised.’