Skip to content
You are here
Home > Advertorial > Persistence required 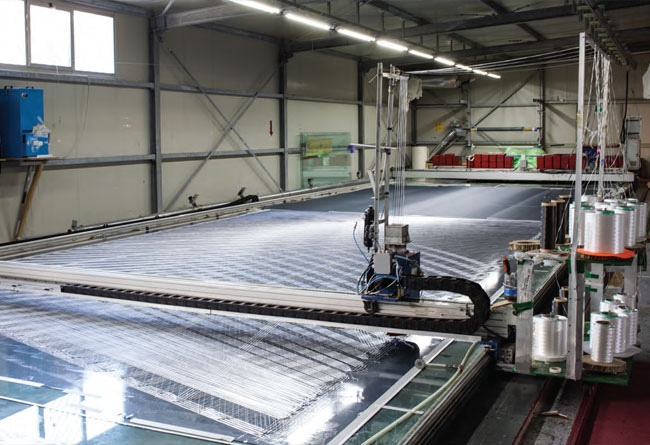 There is a modern fibre that is less than easy to use but if you can eventually pull it off the results can be spectacular.

‘You wouldn’t use anything other than Dyneema for your halyards or sheets,’ says Banks Sails’ boss Paolo Semeraro. ‘So why accept anything less in your sails?’ There are good reasons why most sailmakers don’t offer sails reinforced with Dyneema despite its well-known strength, durability and toughness. Instead, they tend to use sailcloth made with carbon or aramid fibre. Dyneema may be stronger than carbon, much less brittle and three times lighter for the same diameter, but it’s slippery, which makes it awkward to laminate into the body of a sail – and you really don’t want a sail with load-bearing filaments that are liable to slip around when it flogs. ‘Nobody else is using it,’ Semeraro says. ‘But we have found a way to make it work.’

After five years making Dyneema-reinforced sails with no problems, there is no longer any doubt that they have indeed cracked it.

Banks Sails is also very unusual in keeping a film inside its membrane sails while almost all other sail lofts and sailcloth manufacturers have abandoned that method and moved on to filmless membranes following an embarrassing spate of problems, including some high-profile incidents in which state-of-the-art sails suffered sudden, disastrous delamination failures during major races and regattas, sometimes after very little use.

‘I must be honest and admit that we too had our share of those problems,’ Semeraro says. ‘But that was more than 10 years ago, during the very early years of membrane sail manufacturing and we suffered very very few anyway. We began using our unique in-house manufacturing process – which is now called Revolution/iRevolution – seven years ago and ever since then, we haven’t had a single delamination problem with any of our sails.’

As a rule of thumb, the bigger the sail, the greater the risk of it delaminating – but this is not true with Banks’ technology due to a multilayer and multistep lamination process. Some of the sails produced by Banks Sails are enormous.

‘The largest yacht with our Revolution sails is a 133-footer with a 400m2 mainsail and a 450m2 yankee,’ Semeraro says, ‘Five years on, she’s still happily cruising in the strong breezes of the south Aegean Sea. We’ve also had fantastic results with Dyneema in Code 0 and A0 sails. The largest of those that we’ve made so far is the 750m2 code sail on Nomad IV, a 100ft fast cruiser designed by Finot-Conq.’And we are very confident in making cableless flying sails, mixing Dyneema and carbon in the luff and Dyneema only in the body. Solaris 64’ and GS 80’ plus a number of other boats have these as cruising mate and racing engines.

It might sound like heresy and if you’re one of the many sailors who have witnessed a laminated sail dramatically self-destruct halfway through its expected lifespan, you’ll probably be sceptical of Semeraro’s bold claims. However, he has a strong track record of confounding expectations and delivering surprise results in a sailing and technical career that has spanned the Olympics, America’s Cup campaigns and more recently a storming performance in the Middle Sea Race, which he won convincingly in his own self-built yacht.

The secret to making reliable, durable laminate sails is fourfold, Semeraro explains: ‘We believe very strongly in our proprietary, made-in- Italy lamination process. The most important aspects are the glue and the post-cure, but the pressure and the structural skin are also crucial elements. Our whole process is unique and very different. It takes a lot of time and requires a lot of space, so the system we use is not really suitable for a fast-paced industrial organization. We build custom tailored sails of high quality; we do not have the pressure of external shareholders or owners. We aspire to producing fewer, but better products. We know all of our customers by name and we deliver a highly personal service.’

Back in the days when delamination was a widespread problem, Semeraro explains, membrane sailcloth and most of the alternative materials available to sailmakers were made by sticking together several layers with a thermoplastic adhesive. This glue was either applied in between the fibres or added on top as a separate layer. Next, the layers were bonded by pressing them lightly together in a vacuum bag that exerted a maximum pressure of around 1kg/cm2 and then cured for a few minutes. ‘The glue fused around the fibres and solidified again once cold,’ he says. ‘Unfortunately the bond was reversible under certain conditions.’ With the wrong sort of temperature fluctuations it could be weakened and ultimately come unstuck. Small pockets of air trapped inside the laminate were another cause of failure.

By contrast, the manufacturing process developed by Banks uses specially formulated two-part soft resin that bonds with an irreversible chemical reaction to create a new molecule out of the original two. The layers are laminated in a vacuum and heated evenly to an optimum temperature by a line of infra-red lamps. After that they are squeezed between six-metre long (full table width) rollers and a glass surface at an extreme pressure of 12 kg/cm2, (10 to 15 higher pressure than simple vacuum lamination) which Semeraro says is the only way to incorporate Dyneema filaments into the laminate and also eliminates even tiny air pockets. ‘Waves of heat and over-pressure proceed uniformly over the whole vacuumed piece of sailcloth,’ he explains. ‘Once the cloth is stabilized, after one to three weeks of vacuum at a controlled temperature, the curves are drawn. This solves the great problem of how to very precisely reproduce a given design, which is common with moulded sails.’

The other crucial difference is at the end of the process, when finished sails are post-cured in a vacuum for days or in some cases even weeks in a dedicated ‘rest room’ where both temperature and humidity are precisely controlled. The time factor does add to the cost – and big projects must be commissioned months in advance – but Banks’ sails are still competitively priced and far from the most expensive.

The structural skin of these sails is another unique selling point, which Semeraro says gives them a longer service life. Rather than just adding a simple taffeta on a simple mylar film, as a UV-protective outer layer, Banks Sails uses a combination of very thin polyester film and lightweight (1/3 of a taffeta) non-woven polyester cloth pre-impregnated with a UV-resistant resin. The result is a strengthened, toughened sail that not only stands up to being clouted repeatedly against shrouds and spreaders but also absorbs the compression loads that are inevitable when sailing in choppy seas, rather than allowing the motion of the boat to distort the shape of the sail.

When structural skin is combined with Dyneema load-bearing fibres, Semeraro is so confident about his sails’ shockproof, rip-stop properties that he says it’s almost impossible to cut them with a sharp knife. ‘With a one-metre rip in the middle of a Code 0 you can continue to use it normally without causing any further damage, even in strong winds,’ he adds. And that alone is an enormous benefit if you’re setting off on a long-distance ocean race with just one suit of sails.

‘We come from a pure racing background,’ Semeraro says. ‘Our sails were used by the X-35 and ORCi World Champions every year from 2008 to 2012 and we’ve also made sails for several Maxi Rolex winners. More recently we’ve focused on performance cruising and offshore racing sails, where durability is just as important as performance.

‘Banks Sails Europe might not be the most fashionable brand but we have a very solid customer base in performance cruising and offshore racing, which proves the longevity and performance of our products.

‘Our clients include owners of very successful boats like the XP-44 Xp-Act which has been on the podium of the Middle Sea Race for eight consecutive years and the Grand Soleil 58 Leaps & Bounds which despite her cruising configuration has been on the podium of the Med’s main offshore races in 2018 and 2019. Our most recent projects include sails for boats like the Solaris 68, 64, 50 and 37, Grand Soleil 80 Custom, other Grand Soleil yachts from 58ft to 39ft and some interesting custom projects.’