Skip to content
You are here
Home > Advertorial > Persico Marine: (Almost) a clean sheet of paper 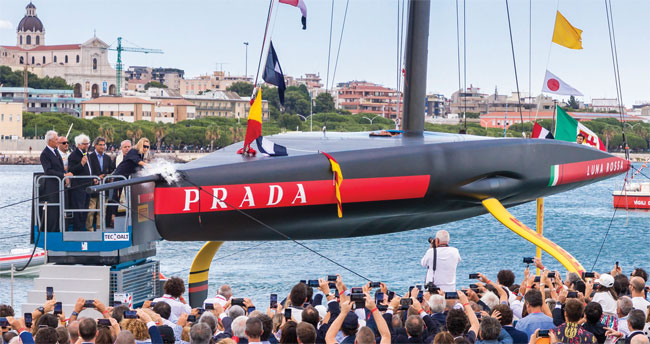 Moving from Archimedean craft to foilers – and particularly to foils – demands a new mindset as much as it does a new approach to composite construction and engineering.

Persico Marine is a name associated with the building of cutting-edge race craft, having been deeply involved with the Volvo Ocean Race boats, the America’s Cup and many more. This year the boatyard delivered 20 foils alone, and Persico’s order books are filling fast for more.

When sailing boats literally take off, it naturally changes the game quite a bit. Not only the sailing, but also the design and construction. Especially so when we look at larger racing yachts. We have become used to foiling dinghies of the International Moth class, which has always embraced new ideas and technology almost in a pioneering manner. But designing and building foiling sailboats of substantial sizes like the AC catamarans, last seen racing in Bermuda at speeds well in excess of 40 knots, is quite a different story.

So what are the technical challenges in building these foils? After all, appendages like keels, rudders or centreboards are basically all foils. Now, however, we are talking about profiles more akin to aircraft wings than traditional sailboat keels.

‘Boats without foils are probably around 40 per cent slower,’ says Mark Somerville, general manager of Persico Marine’s racing unit. ‘This changes the whole way of sailing. Yesterday, it was all about VMG, now it is the apparent wind. During the last America’s Cup regatta, the general public could not really tell if these boats were going upwind or downwind. And more and more classes are now changing to foils.’

As different classes and types of boat switch to foiling, from the Moths to the extreme racing machines for the America’s Cup, many different types of foils are designed. ‘These are all made with different technologies, different processes’, Somerville explains. ‘We work very closely with designers and engineers. We have a wealth of experience to share with designers. This close collaboration is necessary to keep failures down. All the loads of the entire boat must go through the foils. You can’t have any flaws here. The level of expectation and precision is much higher here than in any other part of the boat. Also, at the same time, foils are designed to be as light and small as possible.’

Marcello Persico, CEO, adds: ‘This is a lot of responsibility. The quality of the part they are flying on actually ensures the safety of the crew and the boat. Because of this, we develop ever more steps of quality control.’

This is especially true when Persico is not building the entire boat, but “just” delivering the foils to another builder. Another crucial part, obviously, is the connection of the foil to the hull. For the last generation of Volvo Ocean Race yachts, Persico points out that they were in control of the tolerances of all foil-bearings in the hulls. Progressing from this experience, Persico now often also supplies the bearings for the hulls together with the foils – otherwise, this could be a potentially weak spot.

What about other weak spots? ‘Foils are basically just another form of appendage,’ Somerville says, ‘but they are different today, keels are much stronger. Some are hollow and some have solid carbon stocks. These are very difficult to manufacture, especially as size increases. In a thicker laminate you must know exactly how to deal with, for example, thermal effects. Things literally get hot when making big laminates. We are dealing with thermal expansion and resin reaction – resin can become too hot, begin to boil and even burn in the process! Then there is also distortion during the curing process as resin shrinks when cooling down. All this is quite complex, but needs to be fully understood to manufacture these parts. The foil itself is stiffer and stronger than the tooling made for it and can, if the process is not accurately controlled, distort the tooling and its own shape. However, the final geometry of the foil must of course be fully accurate.’

For the America’s Cup, Persico Marine in fact are the official supplier for all foil arms for all teams, to one-design standard at 300kg each – with a tolerance of less than one kg. At their facility in Nembro, Persico made arm tests of these foils with all of the teams.

‘Only we can provide these services as we have the necessary machines – we use the best of man and the best of machine’ explains Somerville. ‘We take each new foil to the test bench, test it to 100 per cent and a bit more. Some we also stress to full failure and we then supply the data gained to the teams, which is a unique service.’ A Volvo 65 foil made by Persico that had sailed around the world twice was tested to failure in their facilities. They expected it to break at a load of 11 tons, but it only failed at 18 tons.

Another big issue now is the time frame. Mark Somerville describes this challenge: ‘Big regattas start at a certain date and teams need to meet these dates and have enough time to try and test before. As a consequence, we need to deliver early enough or not at all. And the foils are often the most expensive part of the whole boat. So we also need to come up with ideas how to build faster. We try very hard to improve and automate. In the next 12 months we shall install new machines that will set new standards in both quality and timing.’

Foils and their manufacturing have developed dramatically and continue to do so as foiling itself and the understanding of this technique by the sailors evolves. The two foils for the new Hugo Boss and others for the next generation of Imoca have a very different design from previous profiles, and the technical experts at Persico have worked extremely hard to match the building process to the constraints that have come up with the new designs. As the Chief Executive of Alex Thomson Racing recently said, grand prix yacht racing at this level is no longer just about qualified naval architecture and competent ocean racing, but also an engineering challenge at the very highest level.

The engineering community now understands this a lot more, so failures have become rare and solutions more commonly available. Still, at Persico Marine they are confident and comfortable that the company can do more than others and stay a step ahead. Most foils are now moveable, one example of which is the “wing” for the ClubSwan 36, which is somewhat easier to make than Imoca or AC foils, due to its size. Size matters – and smaller is easier to build as the effects described above are less of an issue. This is still America’s Cup-level technology, but on a smaller scale. The Swan only has one foil, which moves through the boat to stick out on either side. Also, on well-designed and balanced boats, the foils are now increasingly replacing canards or daggerboards, making these superfluous by also providing all of the lateral resistance the yacht needs.

At Persico Marine, designers, engineers and directors are very proud to have supplied all new America’s Cup foil arms. The new AC75 monohulls will be more airborne than ever in the 2021 Cup races, without keels but sporting ballasted foils.

It’s a nice way to celebrate the 100th anniversary of the dream of the American brothers, Malcolm and Thomas McIntyre, who were the first to imagine a flying monohull. It was only in the 1950s that another American, Gordon Baker, achieved the unthinkable by flying a monohull for the very first time with the boat Monitor, which achieved speeds of 30kts and more on its hollow steel hydrofoils.

From those times it has been a long way via canting keels to the cutting-edge, high-tech composite foils used today. As Marcello Persico puts it: ‘It has been, and still is, a remarkable journey through time and evolution and, in recent decades, we have been a core part of this.’ Indeed, the experience gained at Persico is valuable to engineers and designers and boat classes. Just remember that Persico Marine built all the hulls for the Volvo Ocean 65, plus 24 daggerboards. Now it is the America’s Cup, the new generation of Imoca Open 60s, of which the new foiling boat for Thomas Ruyant is a prime example, but also large and very large highperformance cruising yachts such as the latest and largest Wally to date. Tango, the fourth Wallycento box rule 100ft superyacht, was recently launched at Persico Marine.