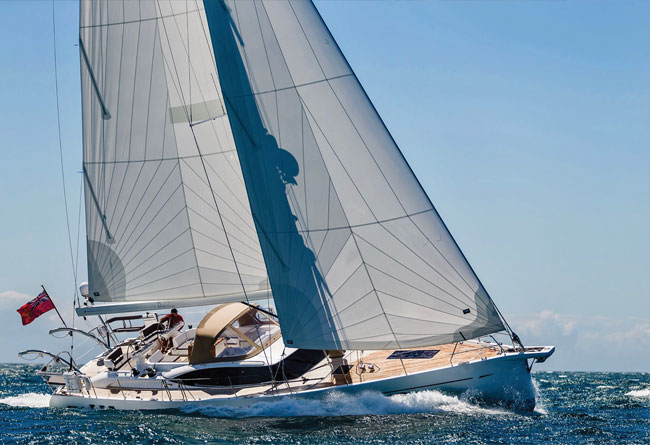 Under its new ownership a famous British yacht builder is taking a step up in the world.

It’s not often that rules and regulations lead to more freedom and choice. Yet sometimes, technical changes behind the scenes can trigger an effect that goes further than expected. Such has been the case with Oyster Yachts.

The start of the chain reaction came with Oyster’s new ownership in March 2018 after Richard Hadida bought the company. With a healthy order book and a strong global reputation, the task of reinvigorating the famous British brand began with improving production efficiency along with a careful look at the entire model range.

There was also the issue of restoring confidence in the market and that message started with the clear statement that all new Oysters would be built under the supervision of Lloyds Register. Achieving a hull and deck moulding certificate meant a great deal of work behind the scenes in the design and production areas of the business. This in turn had resulted in greater flexibility that now allows a better link between the sales and engineering sides of the company.

‘The starting point was that all Oyster yachts that were under the 24m load line length (ll) measurement, where adherence to classification is mandatory, were built to confirm to the EU RCD II (European Recreational Craft Directive) regulations,’ explains Ben Mobley, Oyster’s head of group engineering.

‘What we decided to do was to raise the bar and take the certification on to another level by ensuring that all yachts in this sub- 24m ll category complied with the structural requirements of Lloyds’ Register SSC (Special Service Craft) rules. This is achieved by attaining structural plan approval in the design stage paying particular care to the trinity of chainplate, keel floor and mast foundation and building the yacht’s main mouldings with weekly inspections by a Lloyds Register surveyor.

‘Across our range, the regulations’ key focus is on changes to laminate and topside core thicknesses and may include an increase of a few more plys or an alternative structural layout. There are sometimes different web depths to consider for the structural elements and more secondary reinforcement added to the hull shell,’ he continues.

‘Although these differences are often small changes, they can have a knock-on effect for the internal layout. If the overall hull is slightly thicker, it may mean for instance that locker spaces must be changed, or cable and plumbing runs re-routed. This meant we had to go right back through each of the designs to establish how they would be affected by the new rules, how we could apply them and what the effects on the internal layout would be.

‘In order for the structural design of our existing yachts to be plan approved to the more onerous Special Service Craft rules our engineering teams likened the exercise to pulling the chassis out of an existing production car to strengthen it, before then putting it back in again and making sure it still fits within the body shell, around the seats, the engine, the steering column and the suspension and everything else. So it was a big task to apply this to a trusted and established range of boats that already meet the Recreation Craft Directive governed by the ISO 12215 structural regulations.

‘Oyster 565 hull number three was the first yacht built under Richard Hadida’s business ownership to gain this new certificate and from here all of our boats will meet the standards of what is arguably the original classification society, Lloyds Register.’

Even then, gaining the moulding certificate meant further significant work for the company, especially for the laminating workshop, which has undergone a transformation after an extensive redevelopment of the Norfolk-based site.

‘It has been a 12-month journey, but one that has been invaluable because we now have a Lloyd’s Register moulding certificate for each hull and deck that we produce. That journey has involved three key stages, re-engineering the drawings to the SSC rules, achieving Lloyds validation for the building of the hulls and decks and ensuring that all the resins and materials that we use are Lloyds-approved,’ says Mobley.

But that is still only part of the overall change.

In looking carefully at the way in which their boats were built, the Oyster team studied the way in which the design and build process worked. With a long a background of marine design and engineering including 10 years at Sunseeker, Mobley was well aware of the complexities of modern design and construction techniques, especially with projects where a number of different parties, often working in different locations, would be working off a centralised set of designs. This, he believed was an opportunity to consider the way that Oyster Yachts operated.

‘After several months assessing the various software systems available, as a team, we have decided to move to Siemens Teamcenter/NX for our design software. Although Oyster has been using a good 3D design package, the ability for various parties to work on one design concurrently and always have the latest model information and data to hand is an increasingly important feature,’ he explains.

‘As an example, if you’re working on a freshwater system that runs from your tank to, say, four consumer points including basins and showers and you’re putting pipes through bulkheads, the internal accommodation geometry is all linked. So, if a bulkhead position or size is adjusted the pipework may be affected. This software will see the bulkhead changes highlight the conflict and help to re-route the pipework around the new obstacles’.

At the same time, another designer may be working on an interior layout with lockers and berths in or near the same area. The software ensures that what they are working on does not clash with the new positioning of, say, valves, seacocks or filters. So it’s a much more intelligent design package with increased functionality that is linked to all those involved in the design and production process’.

A deeper dive into the workings of the new system suggests additional benefits including a new method for assigning part numbers for every item involved in a yacht’s construction. And while this might sound like a dry, company-centric detail, it too has knock-on effects for existing owners and future clients particularly when it comes to assessing the implications of proposed changes to an existing specification.

The ability for the engineering and sales teams to work together even more closely helps to explore new ideas and requests more effectively. ‘This in turn allows us all to take an even more open-minded approach while still keeping a close control on the production schedule and costs,’ he says. ‘We will also be able to work through a wider range of options and configurations with this system which means that we can in turn offer clients a greater choice of arrangements which have been thoroughly worked through.

‘This has been another year-long project and in the next six months we will really start to see a difference.’

Certainly, it is easy to see how upto- date and accurate information will help to build clearer picture for both manufacturers and clients. And when it comes to visualisation, the longerterm future is even more appealing.

Automotive companies such as Aston Martin and Porsche AG are among those to have capitalised on the ability to show a customer various options using a virtual reality headset. Mobley says the same will be true for those looking at Oyster.

‘Fast forward eight or so months and we hope it will be possible for an owner or a potential client to be able to go into our international showrooms, put on a set of VR goggles and link up with us in Southampton, UK while they experience being aboard one of our boats. We can then run through various interior options where they would be able to see precisely what their choices would look like.’

From here, it doesn’t take much to imagine a situation where owners and potential clients are shown and talked through more complex areas of the yacht including its technical systems and mechanical equipment. A bold and exciting new future triggered in part by new rules and regulations, but mostly by a new vision for an established brand.