Skip to content
You are here
Home > LATEST > Outrider no more 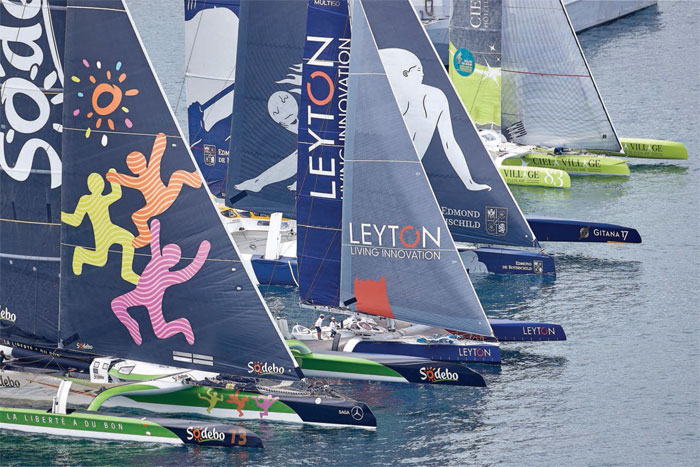 The Drheam-Cup was founded in 2016 and has quickly become a key fixture in French sailing, so much so that the official name has now been changed to the “Drheam-Cup Grand Prix de France de Course au Large”. The race runs in every “even” year, whenever there is not a Rolex Fastnet Race, providing a convenient alternative for those seeking more races of this length in this part of the world.

The race starts in Cherbourg-en- Cotentin and finishes in La Trinitésur- Mer. The Ultimes will race 1500 miles, the Imocas, Ocean 50s and Class 40s will race 1000 miles, and the short course for Figaro 3s, smaller multi-hulls and IRC yachts has been extended from 428 miles in previous editions to 600 miles from 2022 onwards based on competitor demand.

The race is the brainchild of Jacques Civilise, who learnt to sail in Cherbourg and currently lives close to La Trinite-sur-Mer. Jacques feels there are not many races in which all of the important offshore classes get to race together.

‘I wanted to create an event that is as inclusive as possible as I think that diversity makes the whole event, on land and at sea, a lot more fun for everyone’, he says.

So far it seems he has done a good job, as almost every type of offshore boat imaginable has been represented in previous editions. If a larger international IRC entry can be attracted by tweaks to the event format then it will be mission accomplished for Jacques.

The 2022 event will be an official “Route du Rhum – Destination Guadeloupe” qualifier so a large proportion of the world’s fastest boats will be present to add to the spectacle. The 2020 edition saw 95 entries despite significant Covid related restrictions, and there is every reason to believe that number can be increased further as the world emerges from the pandemic and can once again savour sailing around the French coast during summer holidays.

Promoting offshore sailing is a key strategy of the city of Cherbourg-en- Cotentin and its mayor Benoît Arrivé, so competitors can expect a warm and friendly welcome. With the Drheam-Cup Grand Prix de France de Course au Large start and Fastnet arrival taking place on alternate years the city now has a major sailing event every year around which extensive onshore activities can be based. The race village opens on Wednesday 13 July and will really get going with Bastille Day fireworks and other festivities on Thursday 14 July, with concerts, crew dinners and other events also being planned.

The organisers insist that a celebration of Bastille Day, of the scenic host regions, and of offshore sailing in general are the fundamental DNA of the event, so competitors can look forward to a great party as well as a great race.

There is a 20-mile coastal race prologue on Friday 15 July, during which competitors have the option to take some school children for a sail as part of the “Rêves de Large” (Dream Offshore) charitable initiative.

The main event kicks off on Sunday 17 July, with all classes starting at once on one huge line, divided into different sections for different classes for safety reasons.

The fleet initially heads west past the port of Cherbourg before turning north across the channel and then west along the English coast to Wolf Rock. At Wolf Rock the fleet splits as the Ultimes detour north to the Isle of Man, the 1000-mile course goes around the Fastnet Rock, and the IRC boats head south, outside of Ushant and associated TSSs, to Brittany.

The course is likely to include substantial upwind, downwind and reaching legs, and mix tactically demanding sections with tests of speed on various points of sail, making for a great test of all-round offshore sailing that will reward only those boats and crews who are strong across a wide range of conditions.

The prize giving will take place in La Trinite sur Mer, where town mayor Yves Normand – a keen IRC competitor himself – is also a big supporter of the event. Competitors will be able to enjoy some good wine and local seafood before heading home at the end of what should be a memorable week.

For many French IRC boats the event is effectively the third leg of a summer tour following on from the La Trinite – Cowes and Cowes – Dinard races that are part of the RORC calendar. For larger international entrants interested only in longer courses the race fits nicely into the calendar between the Round Ireland Race in June and the Round Britain and Ireland Race in August.

Whilst it would be a shame to miss the festivities, for British boats that are pressed for time and have already completed the relevant safety checks for the RORC Cowes – Dinard race, there is a possibility to arrive in Cherbourg just before the start of the offshore race, which makes the entire race including delivery trips possible with no more than a week away from the office. High speed ferry crossings from Cherbourg to Portsmouth with a total journey time of 3hrs make logistics easy for English crews who leave their boat in Cherbourg for a week after the Cowes-Dinard race.

The French are accustomed to having things their own way when it comes to offshore sailing, particularly when shorthanded, however in the 2020 edition of the Drheam-Cup this wasn’t really the case.

The event saw the first major victory for Sam Goodchild in the Figaro 3 class, whilst the IRC two-handed podium was an entirely foreign affair comprising Expresso (a JPK 1030 representing Belgium) as well as Gentoo and Leyton, two Sunfast 3300s from the UK.

In 2018 the Brits also had reason to cheer as Sam Davies won her first ever solo race in the IMOCA 60 class. Whilst it might put a French victory at risk, the organisers would certainly be happy if these exploits tempt more international entries to join the 2022 edition.