Skip to content
You are here
Home > Recommended > Opinion: SailGP struggles to match the hype in Sydney 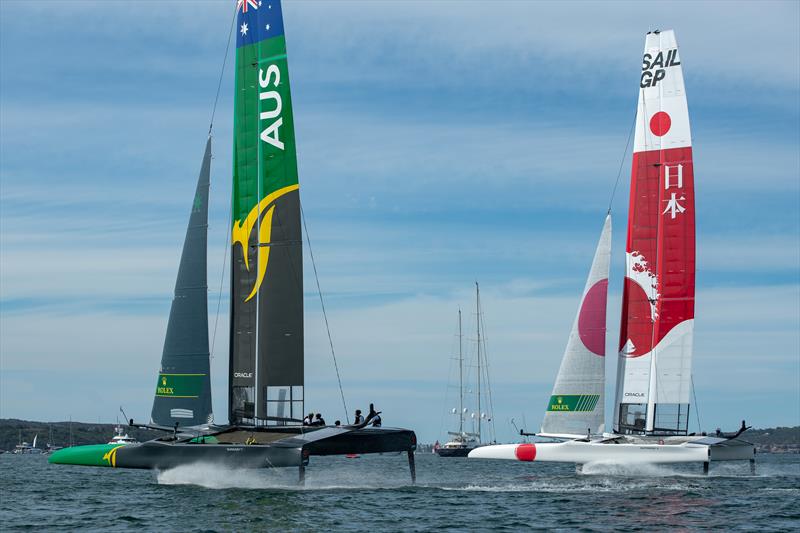 The long awaited SailGP season opening regatta went off largely without a hitch in Sydney, this weekend, despite winds for the two-day event being lighter – mostly in the 5 to 10 knot range – than the organisers would have hoped for.

This made life hard for the six competing crews to keep their F50 catamarans airborne through the tacks and gybes and resulted in some huge spreads in the fleet and large time deltas between first and last place.

There had been plenty of talk in the run up to the Sydney event about the awesome potential top speeds of the F50 catamarans. The state-of-the-art turbocharged foiling boats are expected to top 50 knots (60 miles-per-hour) once the crews have spent enough time in the boats to master them.

Although the gentle breezes and wind shadows of Sydney Harbour at the weekend put paid to any chance of that, the crews still regularly spirted to over 30 knots on the downwind legs.

Watching conventional boats struggling to race in such benign breezes would have been like looking at an oil painting and there is no doubt that fast foiling boats like these are the future of amphitheatre/grandstand sailing events.

That said, there is still a question mark over whether this type of format and coverage is exciting enough to ensnare a significant global audience of sailing fanatics as the SailGP organisers hope to do over the next few years of funding from Oracle founder Larry Ellison.

There were a few – but far from many – exciting moments to recall over the two days of racing.

Like the America’s Cup in Bermuda, the most exciting parts of the races were the blistering reaching legs off the start line and the close-quarters high-speed carving turns at the first mark.

After that, other than the odd high-speed close cross between a pair of boats – the one between Nathan Outteridge (JPN) and Phil Robertson (CHN) at the end of the first downwind on race one was a goodie – there was little for sailing fans to get excited about.

That left the SailGP TV presenters and commentators – whose job it was to rev the whole thing up to fever pitch as often as humanly possible – with a tough job on their hands. It’s easy to criticise people in that role – and many did on social media and on a certain popular anarchic sailing forum – but the truth is you are left with little to talk about when the racing deteriorates into a follow-the-leader procession soon after the first downwind gate of virtually every race.

No doubt things will become slicker as people bed into their roles over the rest of the SailGP season, but some thought should also be given to allowing the on screen talent more freedom in the way they cover the competition.

It’s understandable that the organisers want their event to be presented in its best possible light, but having the talking heads telling us over and over again how awesome what we are watching – or have just watched – is irritating to say the least.

Not every day on the water racing is a classic, just like not every race is a “breathtaking”, “stunning”, or “amazing” experience. Guess what? We all know that is the case – and we are fine with it!

We are also fine with the fact that there will be quiet spots in action and therefore the commentary, so no need to keep talking – “there go the Chinese around the mark” – just for the sake of avoiding dead air.

Audiences appreciate it most when you educate them rather than sell to them. Sailing in general is a complex sport and SailGP is one of the more complex disciplines of it – so why not capitalise on it to raise people’s technical knowledge. Kenny Read was good in that role in the America’s Cup commentary box and Shirley Robertson – who won one of her two Olympic gold medals on Sydney Harbour – did her best to do the same for SailGP.

However, all of this criticism – along with other niggles like the flakey on-screen boundary graphics and the director’s apparent inability to follow the important moments of the racing action – is really just fine tune detail that can relatively easily be fixed over subsequent events.

The bigger concern with this opening event of the inaugural SailGP season is just how fundamentally staid and unoriginal the event’s format and coverage turned out to be.

Ever since the glitzy launch last October in London there have been persistent claims made by SailGP CEO Russell Coutts that the series is “re-defining sailing”. That’s a big statement to make and one which SailGP has not come close to living up to based on what we saw in Sydney.

An event that boasts six international teams, each made up of ultra-talented young and exciting sailors, all desperate to make their name on the world stage and racing aboard the fastest and most un-manageable sailboats on the planet, is an undeniably heady mix.

But large high-performance foiling catamarans have been around for a good while now, and as the America’s Cup World Series, Extreme Sailing Series, and GC32 Racing Tour have all proved, fleet racing them around a short course is nothing new either.

The goal is for the SailGP circuit to grow into a self-sustaining long-term sporting property when Larry Ellison’s funding of it comes to an end in a couple or three years.

To stand a chance of doing that the people who watch it need to be given a reason to care enough about the sport and the competing teams that they become passionate fans and advocates for both.

The people in Auckland and Italy responsible for staging the America’s Cup are facing the same challenge and will no doubt be closely watching how SailGP evolves from here.

It’s clear to most that SailGP is a close facsimile of what the America’s Cup would have looked like had one of the teams that signed up to the ill-fated framework agreement prevailed at the last Cup in Bermuda.

The challenge facing both events is how to elevate themselves to the next level, rather than falling back into repeating the formats we have all seen before.