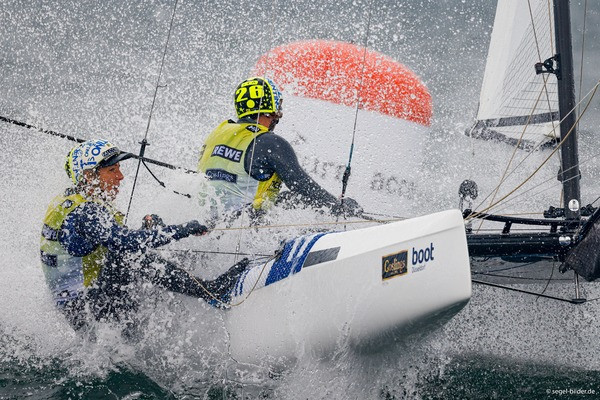 49er FX:
After winning national Olympic qualification, Tina Lutz / Susann Beucke also secured their third Kieler Woche victory. Following on from victories in 2012 and 2016, the Kiel gold medal went to the exceptional German sailors. Until the last race, it was a tight battle with the Americans Stephanie Roble / Maggie Shea, for whom a tenth place in the last race was not enough to topple the German crew from first place. The British crew Charlotte Dobson / Saskia Tidey came in third. “It is something special to win in Kiel. We’ll be celebrating tonight,” said the winners of the German Olympic qualification immediately after crossing the finish line. The family cheered the winners as soon as they entered the harbour. After missed tickets for the Olympic Games in London and Rio, this team is finally on its way to the Olympics at its third attempt.

49er:
After a superior preliminary round and a solid final round, the Danish Olympic champion from 2008 Jonas Warrer almost gambled away victory at the very end. Together with his bowman Jakob Precht Jensen, Warrer rounded off his regatta with seventh and ninth places. The Danish results opened the door to overall victory for the Spanish team of Diego Botin / Iago Lopez Marra. With a first and a third place they drew on points with Warrer / Precht Jensen. But the tie-break was settled in favour of the Danes who had won more races during the week. The French team Lucas Rual / Emile Amoros climbed to third place. For Erik Heil / Thomas Plößel, it was the perfect finish to the regatta with a race win in the final heat, but still the Germans could finish no higher than sixth overall. “In the end we found the right rig settings and had more speed. If we hadn’t sailed so badly on the first day, we could have done more,” said Plößel.

Finn:
After a disappointing European Championship in Poland last week, when he had to be content with fifth place, the Dutchman Nicholas Heiner rehabilitated himself at Kiel. Heiner won ahead of the Argentinean Facundo Olezza and the Swiss Nils Theuninck. “It was an important success, a confirmation of the work in the summer,” said his trainer Mark Andrews, himself a Finn winner at Kieler Woche seven years ago. “Fifth place in the European Championship was not what we wanted. The conditions there were difficult, but they were for everyone. It was a better fit here. Still, there is still some work to be done. That’s okay because we now know what we have to work on. The goal for coach Andrews is clear: “Tokyo is about a medal. That’s why we’re going there.”

Nacra 17:
The Italians Ruggero Tita / Caterina Banti performed in a class above the rest of the Nacra 17 fleet. Without any slip and with seven wins in twelve races, the Italians relegated reigning world champions John Gimson / Anna Burnet (Great Britain) to a distant second place place. Germans Paul Kohlhoff / Alica Stuhlemmer emerged triumphant from a battle for bronze with the reigning Olympic Champions from Argentina. Santiago Lange / Cecilia Carranza put a lot of pressure on the youngest team in the field.

A full 33 years of life experience and three Olympic medals separate 58-year-old sailing legend Lange from 25-year-old Paul Kohlhoff. After a sixth and a tenth place on the final day, the home team made it to bronze by a single point ahead of Argentina. Lange / Carranza had to make do with fourth place overall, despite a victory and a fourth place. The next showdown for these high-speed catamarans is due on September 28th with the European championship on Lake Attersee in Austria.

Laser Radial:
One slip and Kiel gold was gone. The reigning Laser Radial world and Olympic champion Marit Bouwmeester had could only cross the finish line of the last race in 20th place. The slip-up by the Dutch sailor let the 2019 world champion Anne-Marie Rindom (Denmark) past.

“I’m surprised. Marit is a strong competitor, especially when there is a lot of wind. But she made some mistakes, and that was my luck,” said Rindom. “We come to Kiel Week every year, it’s always a great event. We love it. But this year it was particularly high-quality because we didn’t have a regatta after the World Cup.”

Rindom took part in both halves of the regatta during Kiel Week, first sailing in the open Laser Radial class and then in the Olympic women’s fleet: “Completing 22 races in eight days – it’s perfect training for the European Championship in three weeks.” After that, the focus is already on Tokyo: “I will work hard and then expect another close fight with Marit.”

Laser Standard:
At the final in Kiel, Philipp Buhl has already proven his qualities in the final several times. In 2020 Buhl swept to victory with a first and a third place on the final day. Once again, Elliot Hanson was beaten. Two years ago, the Briton had to give Buhl the Kieler Woche victory in the closest of final races, this time the margin of victory was four points.

For the German world champion it is his sixth title at Kiel, with the British duo Hanson and Michael Beckett taking silver and bronze. “I haven’t forgotten how to sail in the wind during the long break,” said Buhl. “But winning is not a sure-fire success in this class. There were seven or eight out of the top 15 in the world.”