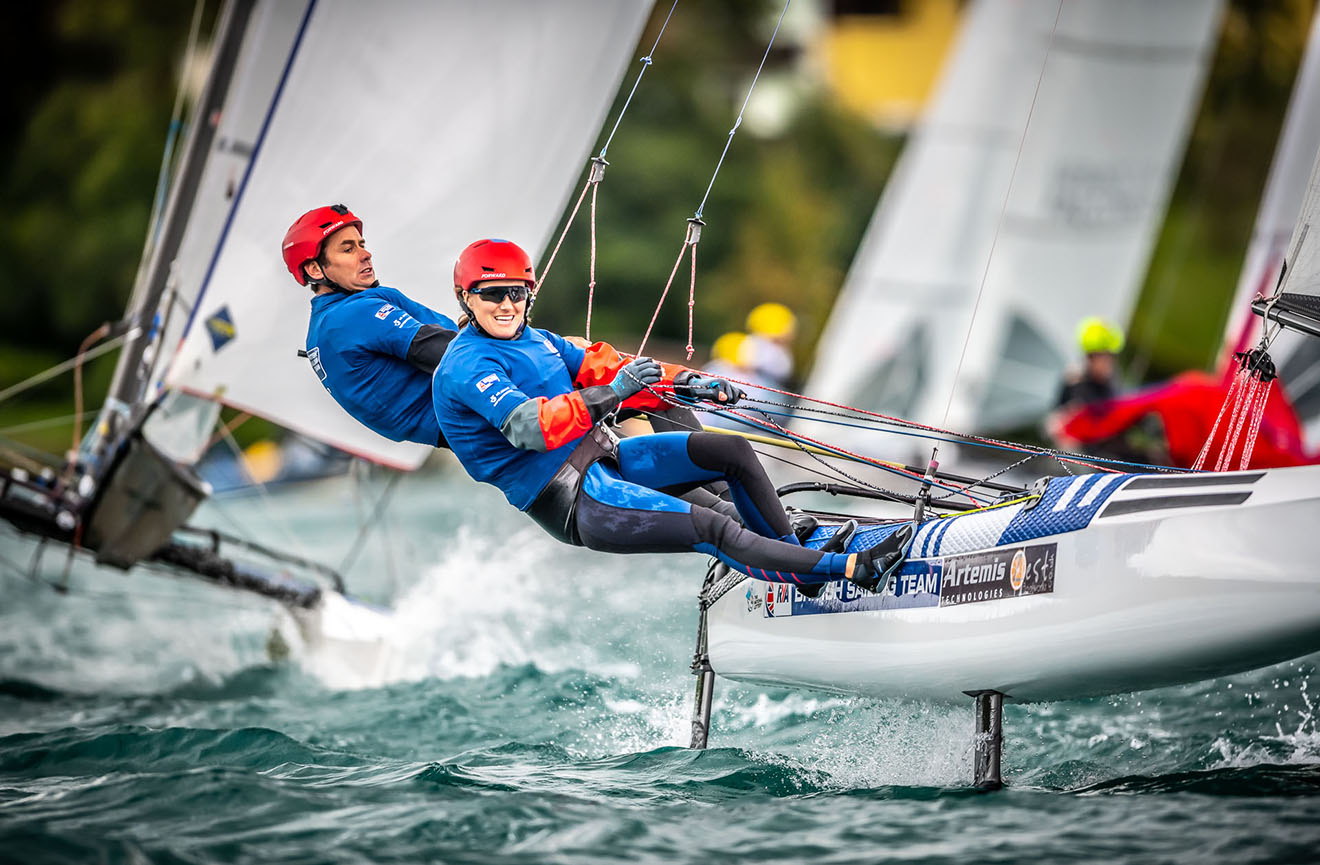 Nacra 17 world champions John Gimson and Anna Burnet said they will “push harder” this winter after missing the podium at the European Championships by one point.

The pair, picked to represent Team GB at Tokyo 2020, admitted to being disappointed not to leave Attersee, Austria, with a medal – but said it gave them “great motivation” as they head to Italy to continue their training.

Gimson and Burnet were second overall and top European crew going into the final day, but with six points splitting the top six teams after five days of close racing the podium places were all up for grabs.

Attersee threw all manner of weather at the crews over the regatta, and the final day was no different with a 7am start allowing for two races before the wind died.

Racing then resumed with the afternoon breeze – and with only two results outside the top ten over 12 races it looked like Gimson and Burnet were on for more silverware.

However, arch rivals Ruggero Tita and Caterina Banti of Italy pulled off a string of top five results to leapfrog to the top of the leaderboard, followed by France’s Quentin Delapierre and Manon Audinet and fellow Italians Vittorio Bissaro and Maelle Frascari.

With one point separating them from the podium, Gimson and Burnet were forced to settle for fourth place – but vowed to learn from the experience as they continue their quest for glory at Tokyo 2020.

“Light, wacky wind is the condition we find hardest as a team, so we were keen to test ourselves at this Europeans,” said Gimson, 37, from Congleton in Cheshire.

“Since March we’ve put a lot of focus on improving our speed in light winds so it was extremely positive to win the light winds day.

“A shame to miss the podium by one point with the top four boats only separated by a few points, but at this stage, going into the winter training period, it’s great motivation to push harder. There’s a lot of analysis to do in the next few days but we already feel we have good clarity on our goals for the winter training and this Europeans has cemented that.”

“We feel like we’ve shown real progress and raced well, getting an average score of 11th in a tricky venue,” said Orton, 24, from Chichester, West Sussex. “Although it was slightly disappointed to slip six places in the last two races to finish 19th overall, we finished eight points off of tenth place which just shows how close the racing was. We’re super happy to be back racing and loved every minute of it.”