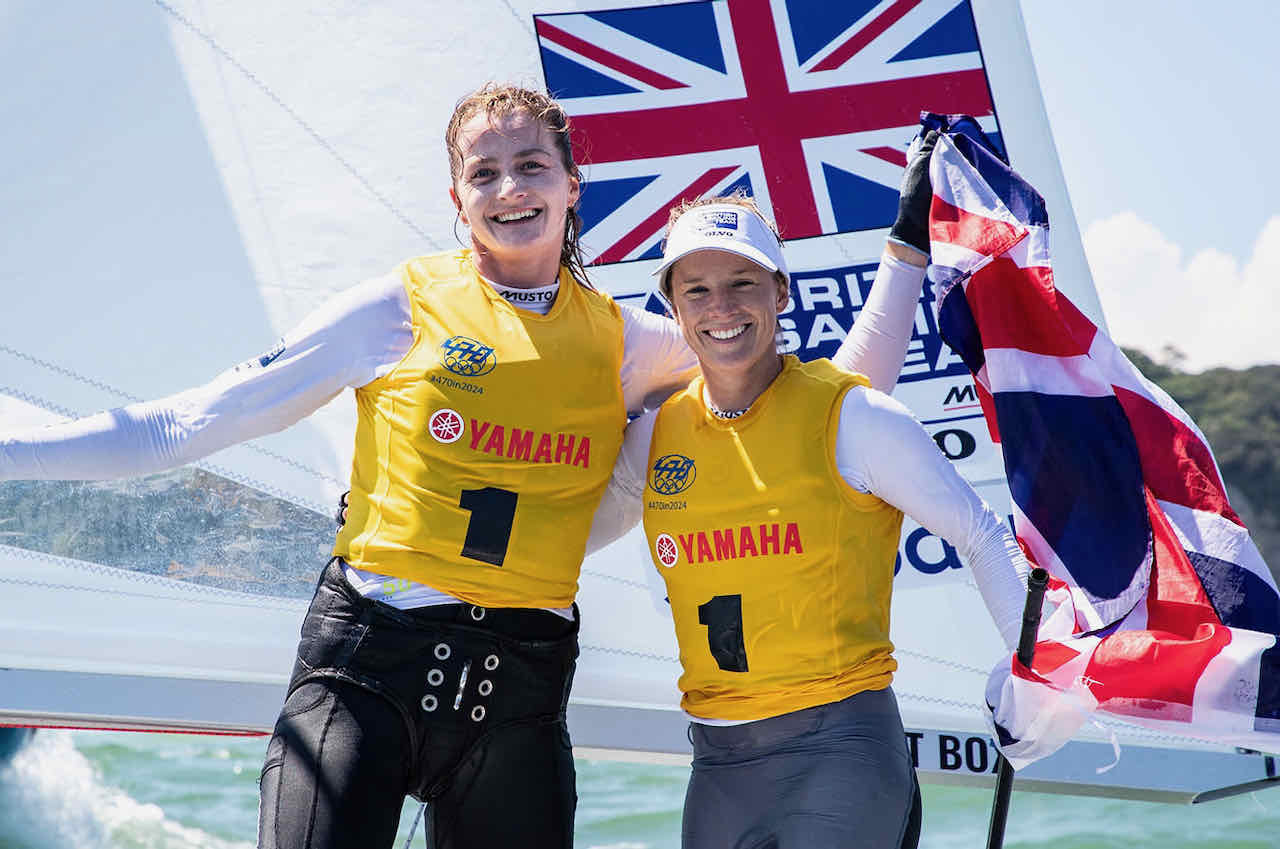 Team GB sailors Hannah Mills and Eilidh McIntyre will launch their bid to retain their 470 World Championship title next week as they prepare to compete for the first time in more than a year.

The duo last saw international action in August 2019 at the Olympic test event held at the Tokyo 2020 sailing venue of Enoshima.

Mills and McIntyre (pictured above) claimed silver, just a fortnight after securing their first world crown together on the same waters.

The string of successes were meant to set them up perfectly for a tilt at Olympic gold the following summer – but since then the COVID-19 pandemic has prevented any 470 racing from taking place.

While Mills and McIntyre have been able to train in the UK at the British Sailing Team’s world class base in Weymouth and Portland, as well as a handful of training blocks in Lanzarote, they have lacked contact time with their most fierce competition.

The World Championships, starting on Monday in Vilamoura, Portugal, will provide a crucial chance to benchmark performance in the critical run-in to the Games after what has been the most challenging of years.

“With only five months to go until the Olympic Games, this regatta is a huge opportunity for us,” said Mills, from Cardiff.

“It will be the first event in over 18 months where we will have pressure to perform and those experiences in the build-up to the Games are crucial.

“The event is a little different to other pre-Olympic World Champs because we don’t know as much about our competitors as we normally would. Many we haven’t seen or raced against for over a year! As much as it is about us and our performance, it’s also about evaluating everyone else and where there have been any gains that we haven’t necessarily predicted, or new teams emerging who could now be a new rival at the Games.

“Regardless of how perfect or imperfect our preparation will be for this event, we are in a place where we can definitely test our ability to perform under pressure and we will be doing everything we can to do that and try and retain our world title. Win or lose, will really lead our focus and direction between now and the Games.”

In the men’s fleet, Tokyo 2020 picks Luke Patience and Chris Grube (pictured above) go up against their rivals in a heavily contested fleet that will also include fellow Brits Martin Wrigley and Alex Hughes.

Meanwhile a host of British crews will be looking to make their mark in the mixed fleet, the new format for the 470 class for Paris 2024.

Competition will be high to claim the first mixed world title. Among those angling for glory will be the pairs of Amy Seabright/James Taylor, Vita Heathcote/Ryan Orr, Georgina Povall/Arran Holman, and Freya Black/Marcus Tressler.

Just a day later at the same venue, windsurfers Tom Squires and Emma Wilson (pictured above) will mark their returns to racing at the RS:X European Championships.

The RS:X class fared better than the 470s in 2020, managing to get a World Championships in before the pandemic struck. A European Championships was then held late in November before tighter restrictions were reintroduced across the continent.

Both athletes are aware the five-day regatta could be their only chance to compete against their rivals ahead of Tokyo 2020.

“There is adversity everywhere, plans are changing all the time with regards to competition and training and staying safe in a changeable and challenging environment,” said Squires, from Oxford.

“From one day to the next you can see your World Championship dates change, venue changes or be all-together cancelled, so to secure this key event just a few months before the Olympics Games is critical for my performance.

“Although this is a European Championships, it is an ‘open event’ allowing everyone from across the world to participate. This including the selected sailors from as far as Japan and New Zealand. It will be a good representation of my current standing and show my strengths and weaknesses against the best.”

Wilson, from Christchurch, Dorset, added: “I’m so excited to being able to race again – we never know when we will get another regatta before Tokyo so for me it’s all about appreciating how lucky we are as athletes and making the most of the opportunity.

“I’ve spent all winter out here in Vilamoura training with a nice group of girls which has been really fun and productive. The level should be really high with only a few people not racing. It will be hard work but good fun.”