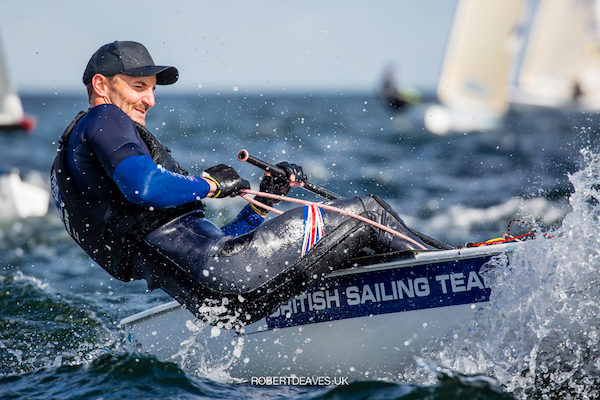 The British Sailing Team’s Giles Scott took a silver medal at the Finn European Championships in Gdynia, Poland, as the Olympic classes returned to action.

The Finn was the first class to hold a major championships of any of the Tokyo 2020 Olympic classes since the COVID-19 outbreak.

Scott, who has won the European title on three occasions, was aiming to defend his 2019 crown but just lost out to Hungarian rival Zsombor Berecz after a tough week of racing. Spain’s Joan Cardona Méndez took the bronze.

“It has been really tricky all week but the final day was particularly shifty,” said Scott, 33, from Huntingdon, Cambridgeshire. “There were 50 degree shifts which were very difficult to manage and knowing when to take the leverage was so hard to get right.

“In the first race I just got totally caught out on the wrong side and was on the back foot. On days like that there’s just no coming back from that, but in the end I was happy to hold on to second place.”

Scott has once again been combining Olympic Finn sailing with his Ineos Team UK America’s Cup commitments and like everyone else has been lacking race action, but the current Olympic champion didn’t feel the break in competition was a factor this time around.

“I didn’t feel rusty at all. This week was just about managing a hell of a lot of risk and sometimes taking a gamble pays off and sometimes it doesn’t. It was all about being consistent and making gains here and there.

“It’s good to get back racing again and to be honest it felt normal. I just would have preferred it to feel normal and to come away defending my title, but this time it wasn’t to be.”

Striving for a win in every competition, Scott holds the highest standards when it comes to sailing and felt he fell just short of those despite taking second place.

“Disappointed is a strong word. I am disappointed with how I sailed on the final day as I felt I put together a solid week overall. Both myself and Zsombor were pretty consistent all week, it’s just he was consistent for one race longer than I was which just put him out of striking distance for me in the final race. But saying that I can’t be too down, I’ve just got a silver medal at a European Championships.”

Team-mate Henry Wetherell has been working with Scott as a training partner ahead of the Tokyo Games and was also in Poland and finishing 11th overall.