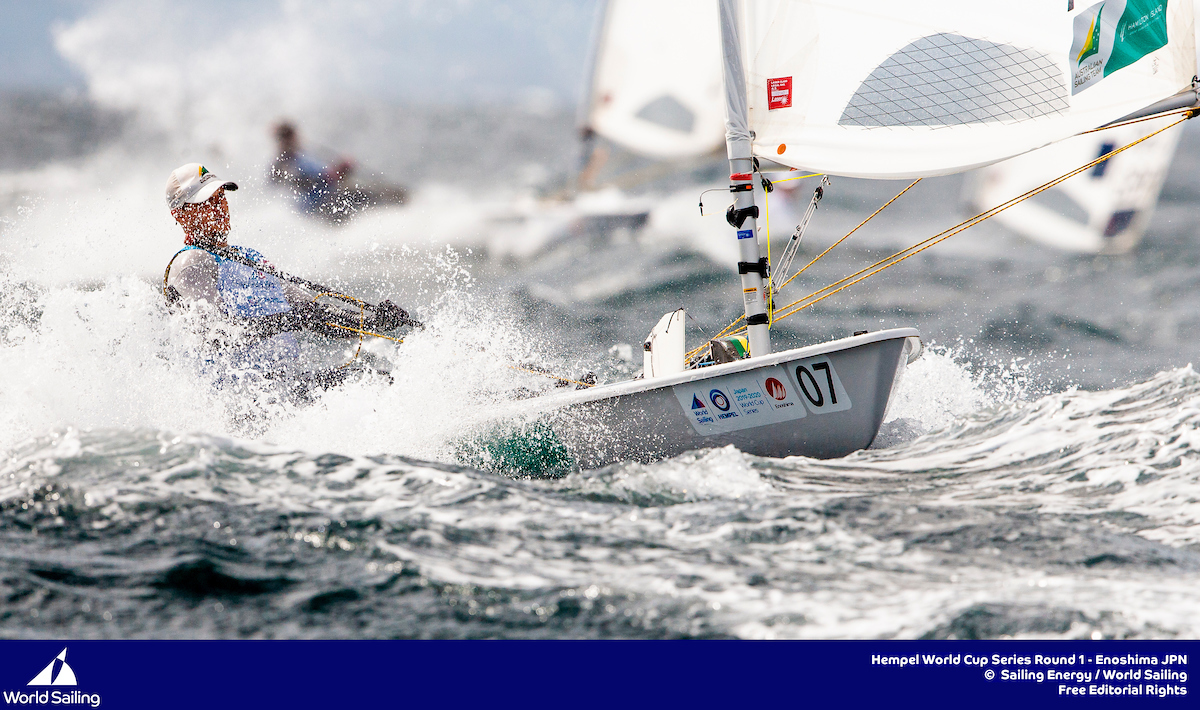 The Australian Sailing Team turned in the best overall medal performance at the Rio 2016 Olympic Games, but can the Aussie Olympic sailing squad do the same in Enoshima, Japan at the Tokyo 2021 Olympics?

Based on feedback from the Test and World Cup events which recently concluded there, Australian yachting journalist Rob Kothe very much believes they can…

When it comes to Olympic sailing, the lottery-funded Team GBR is the big spender, fielding crews in every class for most recent Olympics. But its antipodean sporting rival Australia with a more targeted approach and less money to spend has come out on top, in the last two quads.

The ranking list of Olympic sailing medals has GBR on top with 26 Gold medals, and second in the USA with 19, Norway with 17, France with 13, Spain 13, Denmark 12 and then Australia with just 12.

These historic numbers mask the fact that the GBR Olympic team after a golden period after the surge of Lottery funding has stalled.

Australia has been performing better, remarkable considering that Australian failed to win any medals in Athens 2004.

At the London 2012 Olympic Sailing venue Weymouth, the British National Anthem was played just once while Advance Australia Fare was heard three times. (that year, out of eight Australian gold medals overall, three were in sailing).

Looking at the recent Tokyo Test Event and following World Sailing Cup in Enoshima, which finished yesterday, it is entirely possible that Australia could once again be the top sailing nation in August 2020.
Australian Sailing President Matt Allen is bullish about the Australian Sailing Teams chances.

‘GBR has a lot of sailors in a lot of classes, with potential. Our job is not to worry about GBR. Our job is to go out there and do the best we can and give ourselves the best chance if you are going to win a gold medal you have to peak at the best time, and you have to beat everyone.

‘The logistics for Australia this quad compared to Rio is more favourable. We have strong links with Japanese sailors, only an hour different on time zone- The time spent in this neck of the woods compared to Europe varies from class to class, but we are spending a lot of time here. For instance, our 470 sailors have spent six weeks at the venue with 470 worlds, tests event, and world cup in sequence and this experience will be invaluable.

‘We can sail all through the year so all the competition will come down to us this European and Japanese winter and with so many hotly contested classes and so many regattas, it’s going to be an exciting summer of sailing in Oz.’

The super-coach Victor Kovalenko shot to prominence when his Ukrainian’s charges won Men’s Gold and Women’s Bronze in 1996, then double Australian Gold in 2000, 2008 now could it happen again in 2020?

Back in 2000, after his Australian men’s and women’s teams had blitzed their events, Kovalenko, in a heavy Ukrainian accent told me, ‘the key to winning Olympic Gold is World domination.’

It sounded like a very chilling Russian cold war phrase to me, but it’s what his charges have done in recent years. 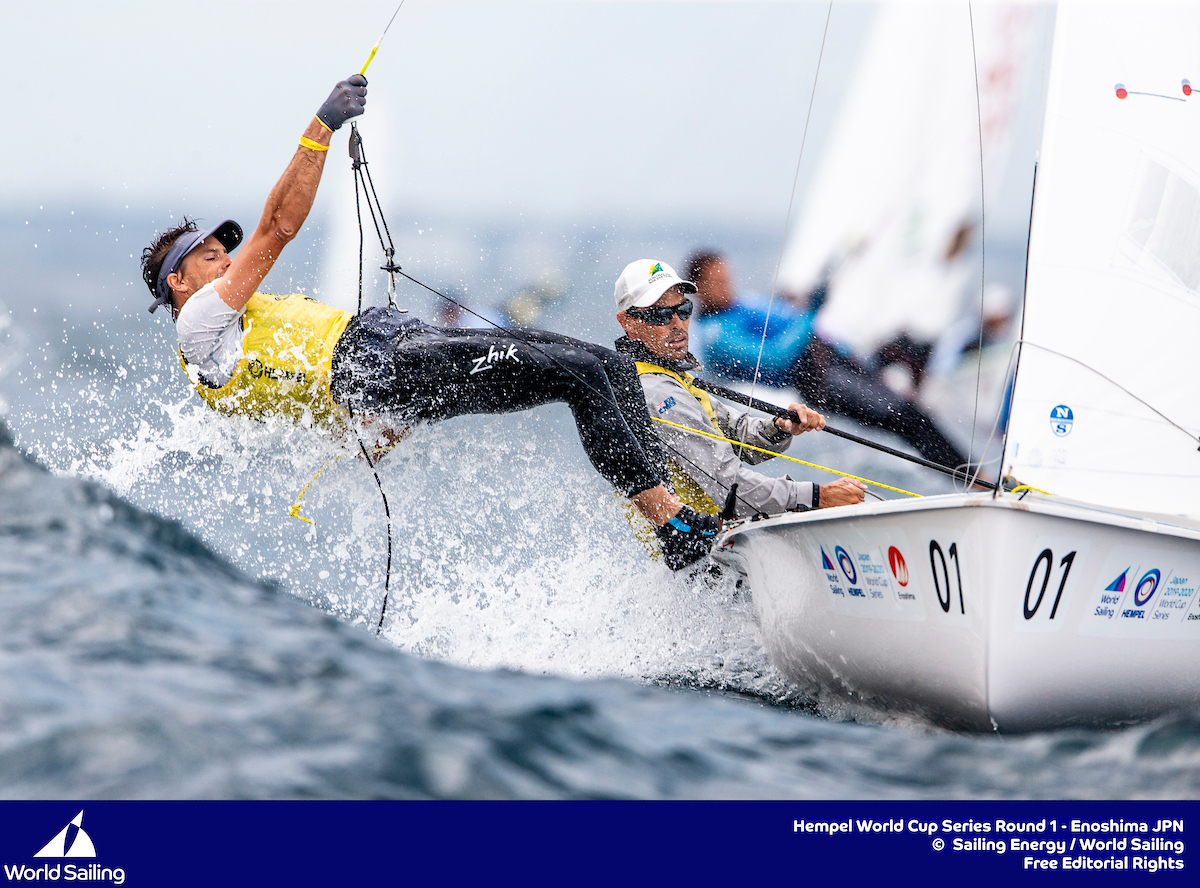 Wilmot and Page dominated the Beijing quad, then won Gold and Belcher and Page into London, Belcher and Ryan did for three-quarters of the Rio quad and stumbled to Silver.

But they have come back to their best in 2019 with an impressive set of World Championship, Test event and World Cup wins in Enoshima, and if they continue in this form, there will be Gold at the end of the rainbow.

The duo was in the Gold medal position in Enoshima yesterday, only to beaten on the last downhill by Spain’s Silvia Mas and Patricia Cantero. 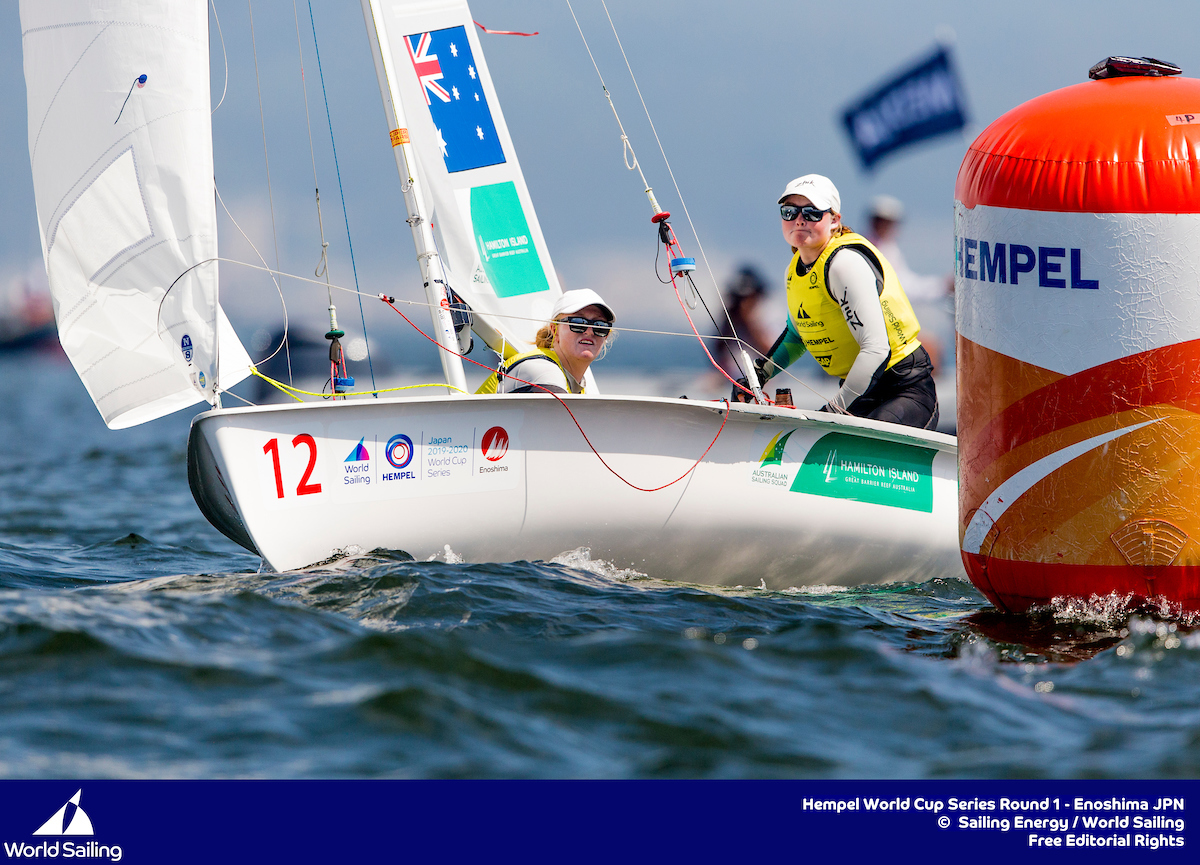 Coached initially by Belinda Stowell (2000 Olympic Gold medallist), they have been benefiting from additional coaching from another of Victor’s charges. Ukraine’s Ruslana Taran, 1997,1998 and 1999 470 Women’s World Champion, has as part of a program reset 12 months ago began working with Stowell in coaching the 470 Women’s team.

With the potential of the team now revealed, it would not surprise if Taran, still Greek-based, spent more time in Australia and Tokyo over the next 11 months, as the 470 program aims for a third double Gold result in 2020.

Rio Silver medallist Jason Waterhouse and cousin crew Lisa Darmanin were expected to be an automatic selection for the Australian Nacra 17 slot in the lead up to Tokyo. However, a late run by the talented Nathan Outteridge and sister Hayley has added some spice to the foiling Nacra 17 battle. The sibling combination took Silver at the 2018 World Championships

While campaigning successfully for London 2012 49er Gold, Outteridge was learning to foil. He told me back in 2010 that in a two-hour circumnavigation of his home pond, Lake Macquarie north of Sydney on his Moth, he had crashed more than 20 times. He did get the hang of it however becoming Moth World Champion in 2011 and 2014, then proving super quick with the Artemis AC50 program in Bermuda and now for Japan on the SailGP circuit.

The two Aussie teams sailed into the Medal race final yesterday in second and third places, but Outteridge missed a shift on the first beat, and Waterhouse over stood a mark for them to finish out of the money, we can be sure there will be a lots of days on the water ahead of the 2019 World Championship in Auckland this December and whichever team final gains Tokyo selection they will challenge for Gold back here in Enoshima next August.

As Matt Allen, reminds us: ‘There is probably no class harder to win than the Laser, yet we’ve managed to win in both the last two Olympics.

‘Now in this class, we have two guys pushing each other: the Rio gold medallist Tom Burton, who is also the 2019 world champion, and Matt Wearn – who keeps finding ways to better his rival in lots of events.

‘Michael Blackburn running the Laser squad has been doing this for a long time, and he has been incredibly successful, getting people to push each other, and the person who pops out of that, is selected has a good chance at performing well at the Olympics.’

In the Test event Burton finished second, and Wearn fourth. In the following World Cup event the positions were reversed.

Australia’s High-Performance Director Iain Murray certainly believes the Australian Sailing Team will be a force to be reckoned with over the next two Olympic cycles and beyond.

‘We had the second largest squad in Enoshima for this World Cup [event],’ Murray said. ‘This event was an important experience and partially an investment for 2024, but our focus is narrowing. Our team is progressing well towards our goals for 2020.”

Using an Aussie Rules expression much loved by footie coaches – Murray added: ‘There is still a lot to accomplish in the fourth quarter as we head towards the Grand Final.’

In the meantime, however, the fourth Ashes cricket test starts this Wednesday. England might have a chance it that!