Hanson was joined on the ILCA7 (formerly Laser Standard) podium by team-mate and training partner Michael Beckett who took bronze in Germany.

Current Nacra 17 world champions Gimson and Burnet have been training in mainland Europe but had their first taste of racing since taking that title in February.

“We really enjoyed being back on the racecourse and it’s great to finish on the podium,” said Burnet, 27, from Rhu, Scotland. “There are a lot of positives from the week for us and it’s nice to have more clarity on what we need to improve going forwards.

“The organisers of Kiel Week did a fantastic job to host such a big regatta safely and we are really hopeful that this can set the precedent for future competitions.”

For bronze medal winning 49erFX crew Tidey, who also last tasted competition in February at the Worlds in Australia, there was a lot of excitement just to be racing again.

“Back in the game,” exclaimed the 27-year-old from Portland, Dorset. “It was a last-minute decision to make the dash to race at Kiel but it was a really good opportunity to check in with some of the top international fleet after three months of sailing at home in the UK.”

Helm Dobson, 34, from Rhu, Scotland, said: “It’s been a great reminder of how much we love racing and why we get up in the morning and train so hard. After a long time away from the fleet we came into the regatta with no expectations, but with perhaps a bit of apprehension as to whether the rest of the fleet might have made a leap during lockdown.

“We are pleased with third and that our key racing skills were still solid but we know we left a lot of points on the racecourse, so it provides a great line in the sand as to where we are and where our focus should be over the coming months.”

The British ILCA7 squad has been strong during the Tokyo cycle and both Hanson (pictured above), who secured Olympic selection, and Beckett (pictured below) picked up medals.

“It’s a big relief to be back international racing and see how things are,” said Hanson, 26, from Macclesfield, Cheshire. “Any opportunity to race I’ll take with an uncertain program evolving each week. From my personal point of view, I felt fast but rusty in a bigger fleet with more depth to colour in those mistakes. That said it’s always nice to medal especially exchanging blows with Micky [Beckett] who I’ve been training hard with this summer.” 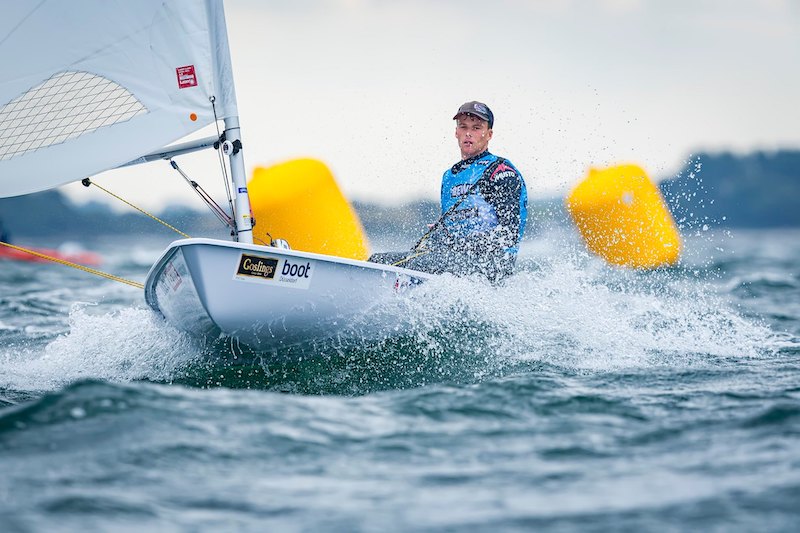 Training partner Beckett, 25, from Solva, Pembrokeshire, was pushing for gold until the final day before eventually securing third spot on the podium: “It’s so, so good to be back racing. It’s been over half a year, result aside it’s just so good to be back on an international racecourse. The event was tough, and I kind of ran out of steam on the last day so slipped from first to third overall, but for my first event back, I’m definitely happy with it.”

Also in the ILCA7 fleet was Sam Whaley who finished 12th with Dan Whiteley in 23rd.