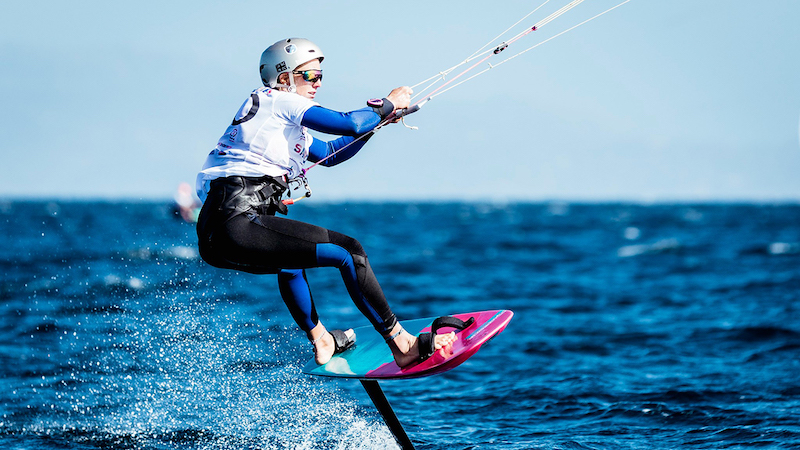 The British Sailing Team’s foilers will lead the charge for medals as international competition resumes for the first time in six months this week.

In what will be a showcase of the new Paris 2024 foiling class equipment, five British Kiteboarders are in action in Puck, Poland, from 18-23 August, while 15 iQFOiL racers are in Silvaplana, Switzerland, from 21-26 August.

With both the kite and foiling windsurf classes new for the Paris 2024 cycle, the British Sailing Team had been holding large training group sessions before the COVID-19 pandemic lockdown with the help of the #kite4gold programme and extended foiling windsurf groups.

As restrictions began to ease both initiatives picked up where they left off with high quality training sessions based out of the Weymouth and Portland Sailing Academy, the home of the London 2012 sailing competition.

Despite uncertain times across the globe, the feeling within the British contingent is one of excitement after what for many is the longest time out of the water since they began their sailing careers.

“I’m really excited to get back racing in a big fleet of female racers again for the first time in almost a year,” said Ellie Aldridge (main image), current Formula Kite European champion, 23, from Poole, Dorset.

As with all new Olympic classes there are certain areas that need to be ironed out before a Games debut and the European Championships is another opportunity for further trials.

“This year is a slightly different race format,” Aldridge added. “We have an opening series of fleet racing, followed by heat elimination stages before a first to three race wins finale to crown the champions. It’s going to be hectic but exciting.

“There are lots of new riders and new equipment, it’s going to be really interesting to see what kit is popular and to see the improvements in riders across the race course.”

Teaming up with Aldridge last time out to win the mixed European title was Connor Bainbridge (pictured above) who this time around is aiming to take the opportunity to shape and progress for the future.

Bainbridge, 26, from Weymouth, Dorset, said: “With this event being the first using the 2024 registered equipment I really don’t know what to expect. I am going in with no expectations with the aim to learn as much as possible about the new equipment and possible new formats so I can get a good idea of what my training into the full 2021 season needs to look like.”

Also on the start line in the women’s fleet is Maddy Anderson who is looking forward to see just how the British training group compares to the rest of the world.

The 25-year-old from London said: “It’s really exciting to be racing internationally again after so long. As a team we’ve actually had a really productive few months in Weymouth since we were allowed back on the water in May.

“We’ve made tangible steps forward in various areas, but we’ve obviously not had the opportunity to measure ourselves on the international scene for some time, so it’s definitely going to be interesting to see if our hard work has paid off.”

Anderson and Aldridge will be joined by Jemima Crathorne and Katie Dabson in the women’s fleet while Bainbridge is the British Sailing Team’s sole male representative.

From one new Olympic class to a change of another, the iQFOiL championships in Switzerland will be the first outing for the new windsurf equipment and the Brits are keen to test themselves against the international competition.

Among the Brits looking to impress will be Team GB’s Tom Squires (pictured above), who will make the switch from the RS:X, the equipment for Tokyo 2020, to the iQFOiL for the regatta.

“Although I’m still fully preparing for the Tokyo 2021 Olympics on the RS:X, any chance I have to race internationally is a bonus right now, even if it’s on the foil,” said the 27-year-old from Kingston Bagpuize, Oxfordshire. “This could be the only chance to race this year, so I’m going to embrace it.”

Matt Barton, 24, from Bury St.Edmunds, Suffolk, added: “The iQFOiL Euros looks well attended with top sailors from slalom, formula and RS:X all coming together to vie for the top spots. With this our first contact with foreign competition in the new Olympic discipline the stakes are high to see how the British training group shapes up.”

Squires and Barton will be among 11 Brits in the male fleet which also boasts 2018 Youth Olympics bronze medallist Finn Hawkins.

British Sailing Team’s Islay Watson and Alysia Gibson are part of a female team of four.

Racing in Poland for the kiteboarders begins Wednesday 19 August and ends on Sunday 23 August, the same day the iQFOiL competition begins. Racing in Switzerland for the windsurfers finishes on Wednesday 26 August.

Follow the action from both events at britishsailingteam.com or on our social media channels.