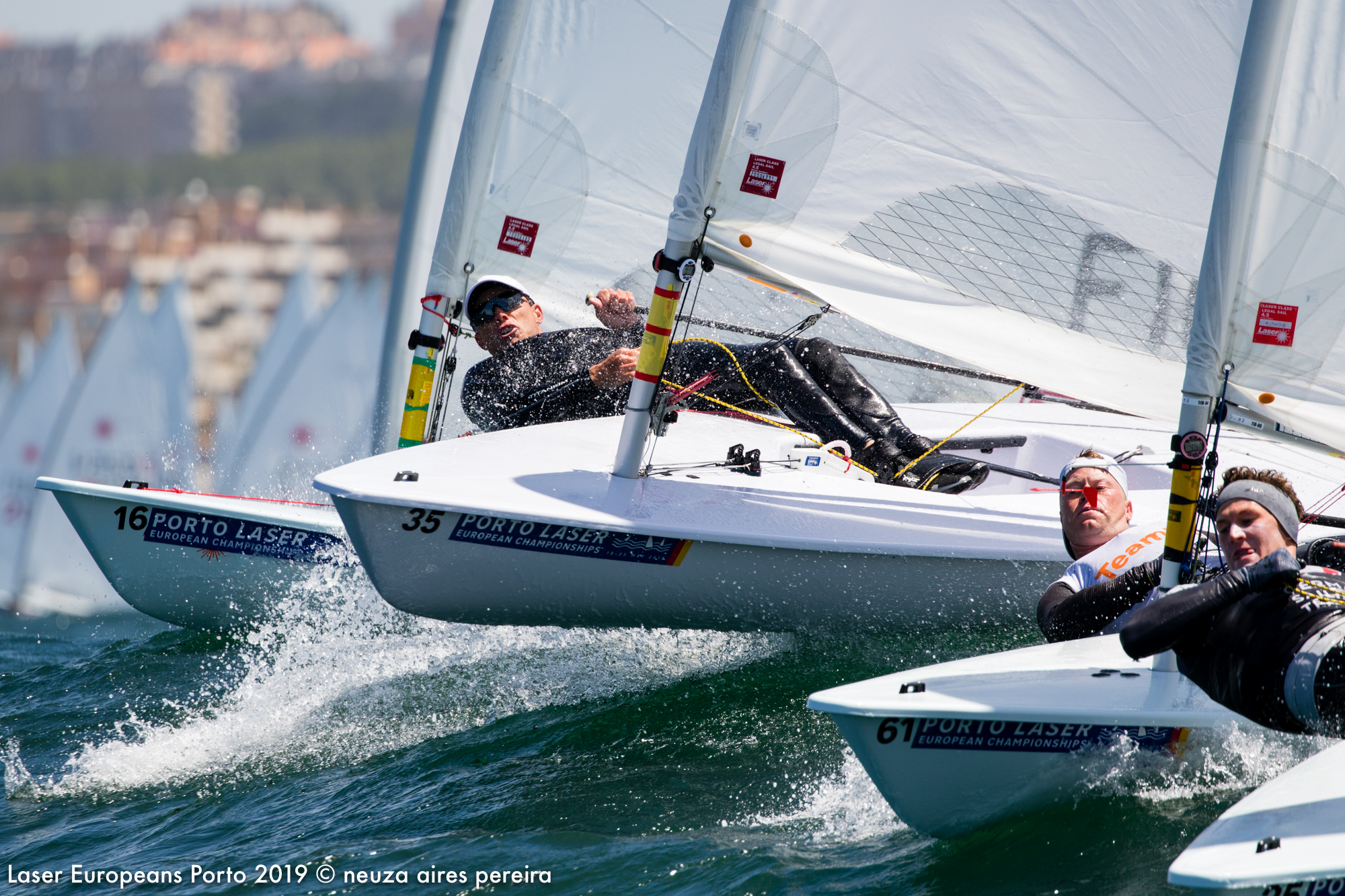 With the Tokyo 2020 Olympic Games just a little more than a year away there has been more focus than usual from competitors and national sailing organisations on the spate of Olympic classes European Championships taking place over the last couple of weeks.

In fact, more than a spate, it’s been more like a frenzy of regattas taking place across Europe to decide the Euro titles for the 470, Finn, 49er, 49erFX, Nacra 17, Laser and Laser Radial classes.

The New Zealand sailors also performed well with Kiwi gold in the 49er, a silver in the Finn, and a bronze in the men’s 470, while Dutch and Danish female sailors claimed multiple medals in the Laser Radial and 49erFX classes.

At the 470 European Championship the Australian the male pairing Matt Belcher and Will Ryan proved unstoppable in the qualification and gold fleet races with four wins and a second to count.

They backed this up with a win in the medal race to take the open title by a margin of 15 points from the Swedish duo Anton Dahlberg and Fredrik Bergstrom who finished second overall and collected the European title as well.

Third was the impressive Kiwi team Paul Snow-Hansen and Daniel Willcox – winners of the third round of the Hempel World Cup Series in Genoa, Italy earlier in the year.

In the Women’s fleet it was the French representatives Camille Lecointre and Aloise Retornaz – bronze medallists at the Rio 2016 Olympic Games and also world champions that year too – who took the title.

After a close fought series at the front of the women’s fleet the French sailors won the medal race to hold off potent challenges from the British crew Hannah Mills and Eilidh McIntyre and the Dutch sailors Afrodite Zegers and Lobke Berkhout.

Maloney and eventual third placed Hungarian Zsombor Berecz pushed Scott hard all week long but Berecz was Scott’s only potential challenger for the gold by the time the medal race came around. A fierce race-long match race inevitably ensued which saw Scott and his Hungarian rival finish in tenth and ninth respectively. (Watch the video below for some great on-board action)

This result was good enough for Scott to claim his third Euro title in the Finn, but relegated Berecz to third behind Maloney who capitalised on the battle between the top two by winning the medal race.

Outside the top three a fifth place overall for Dutch sailor Nicholas Heiner earned him selection as the Netherland’s representative at Tokyo 2020, meaning an end to the Olympic career of three-time Olympian Pieter-Jan Postma. 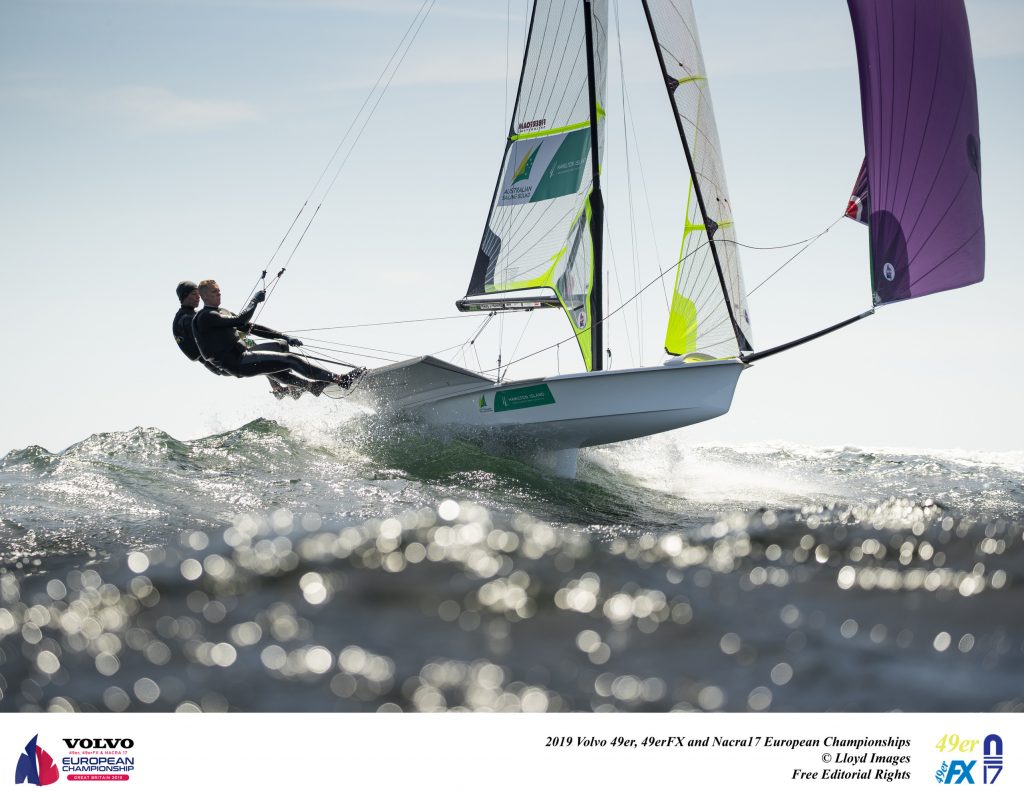 The men’s 49er fleet was dominated by the reigning Olympic champions Peter Burling and
Blair Tuke.

The Kiwi pair who have only returned to full-time 49er sailing in recent weeks found their stride in Weymouth and put on an impressive performance that saw them win the open title by a margin of 11 points after nine qualifier heats and 10 gold fleet races. No medal race was held due to flat calm conditions on the final day.

That meant the two British contenders for the Olympic berth at Tokyo 2020 – Dylan Fletcher & Stu Bithell and James Peters & Fynn Sterritt – had to be content with second and third overall, with Fletcher and Bithell becoming European champions.

In the women’s 49erFX fleet the local heroines from Rio 2016, Olympic champions Martina Grael and Kahina Kunze, dominated all week to go onto the medal race with an unassailable lead of 19 points over the Dutch pair Annemiek Bekkering and Annette Duetz in second place.

The Dutch crew were more interested however in maintaining their top three position in the championship to secure their selection as the Netherland’s representatives at Tokyo 2020. Nothing was guaranteed, but in the end the Dutch pair won their place and the European title with a second in the medal race behind Helene Næss and Marie Rønningen from Denmark who won the race to claim third in the event.

Special mention goes to the fifth placed junior world champions, Vilma Bobeck and Malin Tengstrom, who were particularly impressive in the stronger winds during the week-long regatta.

In the Nacra 17 home advantage seemed to help with two British teams in the gold and silver positions. Ben Saxton and Nicola Boniface won this Brit-battle and emerged as the new European Champions, with teammates John Gimson and Anna Burnet in second.

Third place went to Lin Cenholt and Cp Lubeck from Denmark ahead of the reigning world champions Ruggero Tita and Caterina Banti in fourth. 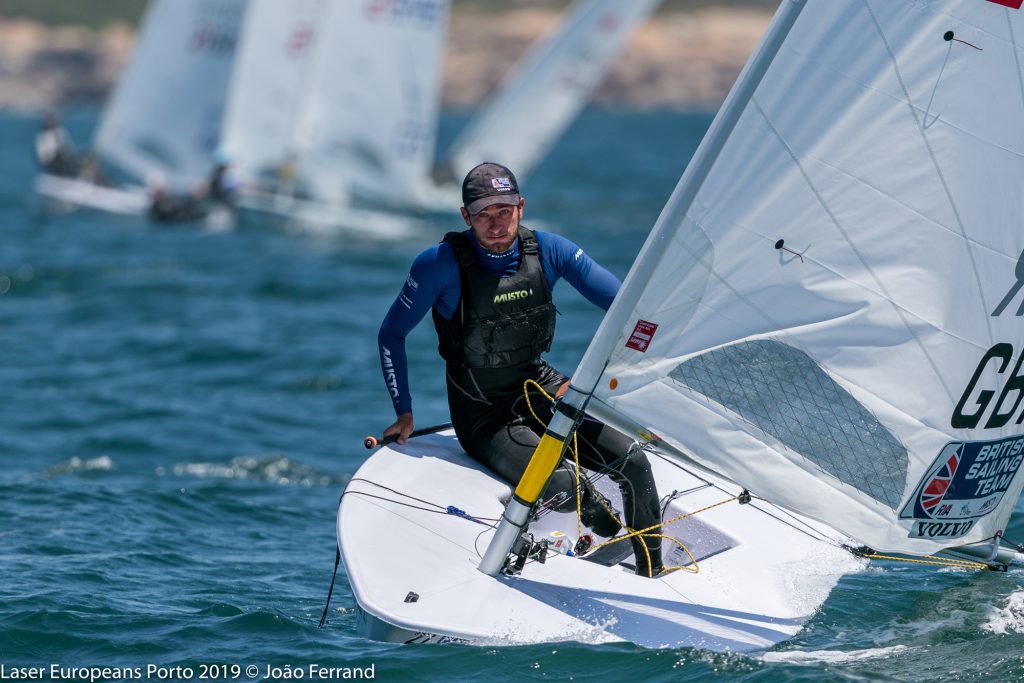 The British Sailing team pulled off its third top two European championship result when Lorenzo Chiavarini from Scotland and Englishman Nick Thompson rose to the top after a highly competitive week of racing in Porto, Portugal.

The women’s Laser radial fleet saw a tight battle for the European title between four of the world’s top female singlehanded sailors currently.

In the end it was Rio 2016 Olympic gold medallist Anne-Marie Rindom from Denmark who came out on top, claiming the European title by a margin of 12 points from Olympic champion Marit Bouwmeester from the Netherlands.