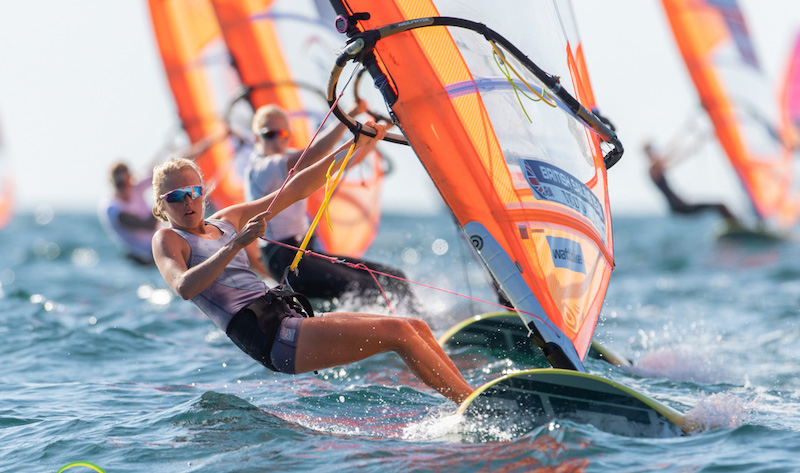 Olympic sailing – Team GB windsurfer Emma Wilson has vowed to bounce back after falling out of contention for a medal at the RS:X European Championships in the final race.

Wilson, 21, went into the double-points medal race in the runner-up spot and with a good shot at her first senior European title after an impressive week of racing in Vilamoura, Portugal.

After shooting out of the blocks, Wilson (main image) led the 10-athlete fleet round the first part of the course, but disaster struck when she was involved in a collision that the on-water judges decided to penalise her for.

After completing her penalty turns Wilson then got hit with a windshift that put her at the back of the fleet, unable to reel in her rivals before the finish.

Crossing the line in tenth gave Wilson a maximum 20 points, relegating her out of medal contention and into fourth in the overall standings behind France’s Charline Picon, Katy Spychakov of Israel and Poland’s Zofia Klepacka.

Wilson, from Christchurch, Dorset, said the result was “pretty hard to take” after a solid week that saw her only finish outside the top eight twice, but said the disappointment would fuel her desire to win when racing resumes in spring.

“I had a great week and I am very grateful just to be able to compete in this Covid situation,” Wilson said. “It was a tough medal race, going into it in second and then leading the race. Then I got caught up in an incident which meant I had to take a penalty, and that cost me a medal. It’s pretty tough to take right now but these things happen sometimes. All I can say is it’s made me so determined. I will come back stronger.”

In the men’s fleet, Wilson’s Tokyo 2020 teammate Tom Squires (above) put together a strong performance to finish fifth overall.

The European Championships was the RS:X class’s first major event since the worlds in Australia in February, and after six months of training at the British Sailing Team base at Weymouth and Portland National Sailing Academy Squires said he was

“This week was hardcore,” said Squires, 27, from Kingston Bagpuize, Oxfordshire. “The fleet is getting smaller with nations who haven’t qualified which means although there is a decreasing the amount of sailors the quality of the fleet is so strong, racing the best of the best. At the start of the week this was a huge shock, and in the lighter winds hit me hard with the results. After that first day I climbed my way up the results. Fifth feels good after so much time away from international competition.”

Squires was the sole British male at the regatta – while the only British teammate to join Wilson in the women’s fleet line-up was rising star Alysia Gibson (above), who came home 25th overall and fifth under-21.

The 19-year-old from Hayling Island, Hants, bettered her 2019 result by 17 places – an impressive jump given she has divided her time this year between racing the RS:X, the current Olympic equipment, and the Paris 2024-bound iQFOiL.

“It was a very challenging week with different conditions every day including wind, big waves and even a couple of 30-knot squalls,” Gibson said. “I just missed out on my goal of coming in the top 20 by a few points, but this just gives me more motivation to push hard over this winter and try get in the top 20 at the next Europeans here in March. I have spent my time this season split between iQFOiL and RS:X, so to come 23rd at the Senior Europeans in the Olympic year makes me really happy.”