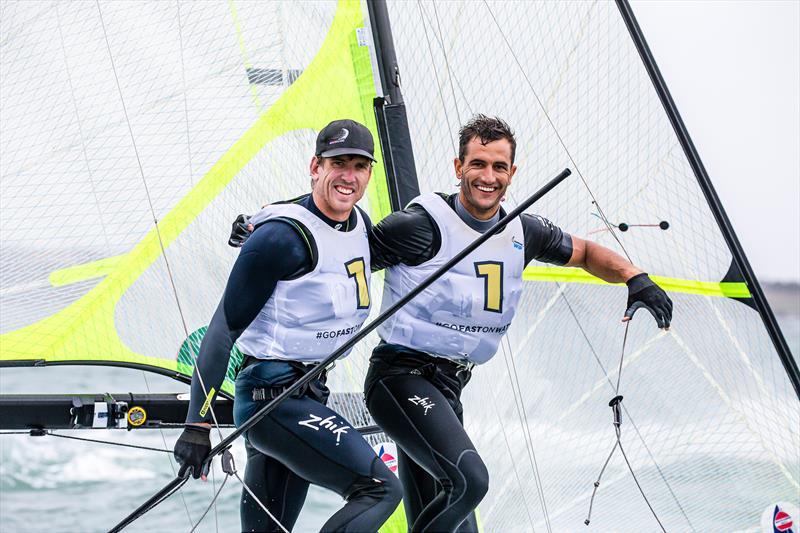 It might not have been as dramatic as the last one but it was no less significant as Peter Burling and Blair Tuke won their sixth 49er world title in Geelong today.

The pair started the day in second, only one point behind the Austrian crew of Benjamin Bildstein and David Hussl, and stamped their class on proceedings by winning the two gold fleet races left on the schedule and then taking an 18-point lead into the double-points, top-10 medal race.

It meant they could afford to take things a little more conservatively than the medal race in Auckland just two months ago when they were in a dogfight with the German combination of Erik Heil and Thomas Ploessel. They still crossed fourth in the breezy conditions to finish 20 points ahead of Spain’s Diego Botin and Iago Lopez Marra.

“It’s been a pretty tricky week and it was pretty top-end conditions in the medal race again but Blair and myself sailed pretty well this morning so it was nice have a little buffer going into that one so we could just enjoy the race,” Burling said.

Tuke added: “We are stoked. It’s only been a couple of months since Auckland but to do it in Olympic year builds a lot of momentum for us, so we are rapt.”

Logan Dunning Beck and Oscar Gunn rounded out a good week for the New Zealand 49er squad by finishing sixth, backing up the fifth they achieved in Auckland, and Isaac McHardie and William McKenzie also finished in the top 20.

Burling and Tuke can at least take their foot off the gas momentarily and reflect on another exceptional week that saw them win seven of the 13 races and confirm their position in the pantheon of Olympic class sailing.

“We’ve put in a lot of work over the last couple of years towards this Olympic campaign so it’s definitely nice to see it all come together,” Burling said. “It’s a pretty key event. It’s one that everyone tries to perform at so we are really happy with how we are progressing. It’s just really exciting to wrap up another world champs.”

Their attention will now switch to the Tokyo Olympics where the pair will be looking to defend the gold medal they won in Rio.

“It’s an exciting few months coming up, that’s for sure, but we will enjoy this,” Tuke said. “It’s been a great week. Obviously the result is great but the fashion we have done it has been pretty pleasing, too.”