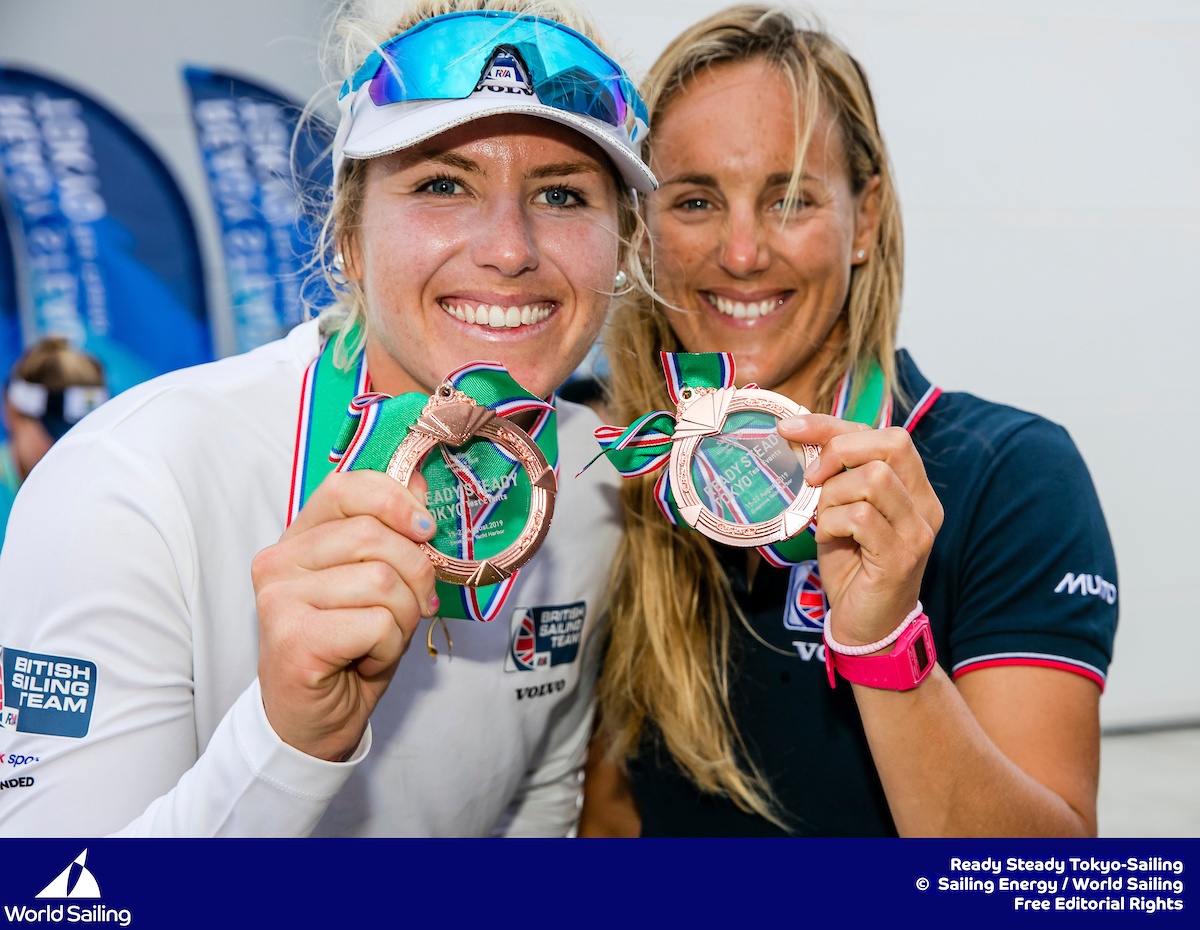 Dubbed Ready Steady Tokyo, the test event held one year out from the Games has long been regarded as an indicator for Olympic success and Great Britain shone taking two silvers and two bronze medals.

Against the world’s best sailors, John Gimson and Anna Burnet claimed silver in the Nacra 17 class and were joined on the podium by team mates Ben Saxton and Nikki Boniface who took bronze.

Heading in to the final race of the Nacra 17 Gimson and Burnet sat second with Saxton and Boniface fifth overall, and that’s how they stood until the final run.

“We weren’t sure we had medalled on the water so to come in and find out we had is amazing. We were trying to work it out on the last downwind.

“We knew we had to get in front of as many boats as possible so pushed as hard as we could but still didn’t think we had done enough to medal. Obviously we can’t count as well as we thought we could,” chuckled Boniface, 26, from Polegate, East Sussex.

Finishing ninth in the medal race was enough to give Gimson and Burnet silver and with it a release.

“I’m just trying to get over the stress of it all,” said Burnet, 26, from Shandon, Scotland. “It was such a stressful medal race. We had a penalty which didn’t help. But when I think about it and it all sinks in I’m sure I’ll be very happy to take a silver medal from the Tokyo 2020 test event.”

Sitting in third going in to the medal race, Fletcher and Scott had silver in their sights. The Rio 2016 champions, New Zealand’s Peter Burling and Blair Tuke, were safe in gold medal position so their biggest threat was Poland’s Przybytek and Kolodzinski.

Their position was helped by a Polish mistake at the start line which put them to the back of the fleet. With Fletcher and Bithell free to run their own race, they crossed in third and with it secured the silver medal.

“We are stoked to win a medal at the test event. Overall we were a little disappointed with how we sailed and on day three we knew it’s not how we usually sail and there is plenty more left. But we were happy to finish off the week strong and when the pressure was on we performed and moved up to silver.” said Fletcher, 31, from Thames Dutton, Surrey.

With a slender one-point lead in the 49erFX, Dobson and Tidey had the Rio 2016 Olympic champions, Brazil’s Martine Grael and Kahena Kunze breathing down their necks.

The Brazilians showed their strength to finish ahead of the British pair and took gold. Dobson and Tidey were then pipped to the silver medal by Norway’s Helene Naess and Marie Ronningen who dominated the medal race and won on a points countback.

“We’re pretty happy to be up on the podium especially in these conditions. Obviously we are quite disappointed not to come away with gold but there is time enough for that. We are happy with where we are right now,” said Tidey, 25, from Portland, Dorset.

Windsurfers Emma Wilson and Tom Squires just missed out on a medal with 20-year-old Wilson finishing fourth in the women’s fleet and Squires fifth in the men’s.

Attention now turns to tomorrow’s medal races where Olympic champions Giles Scott and Hannah Mills will fight for more medals to add to the British haul.

Scott currently sits third with the gold out of reach as Hungary’s Berecz Zsombar has secured top spot with a race to spare. Mills and partner Eilidh McIntyre are just one point off top in the women’s 470 and will look to add gold to the world championship they won in Enoshima last week.