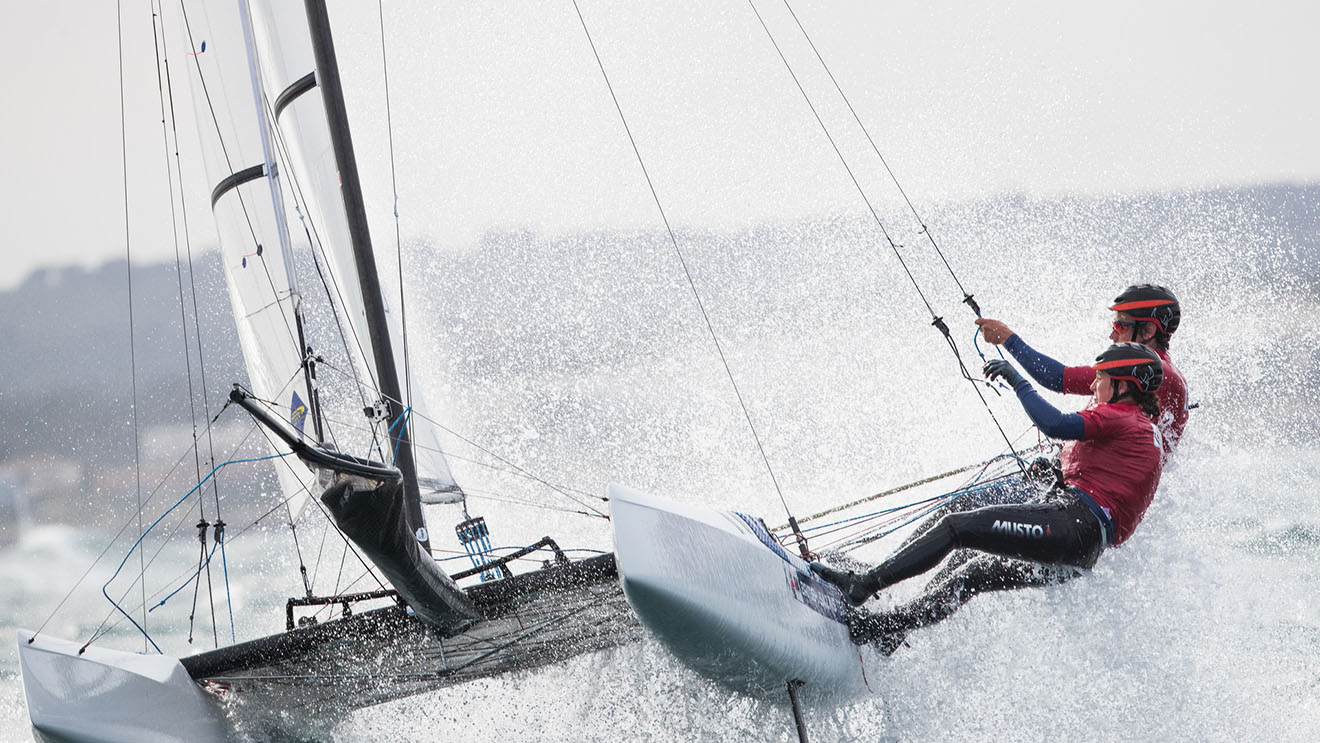 Britain’s Olympic sailors will go up against their rivals in a flurry of world championships taking place in Australia this month as the clock counts down to Tokyo 2020.

Seven of the ten Olympic classes will be in action down under in February as the Olympics draws to within a little over five months until the opening ceremony.

First to hit the water are the 49er, 49erFX and Nacra 17 fleets which will battle it out for Worlds glory in Geelong from February 8 to 15 – just two months since the 2019 championship in Auckland.

Each fleet will feature those selected to represent Team GB at Tokyo 2020: Dylan Fletcher and Stuart Bithell in the 49er (pictured above), Charlotte Dobson and Saskia Tidey in the 49erFX (below) and John Gimson and Anna Burnet in the Nacra 17 (below).

One day later the Laser class will launch from Sandringham, on the other side of Port Philip Bay. Four Brits will not only fight their international rivals but also each other as the battle for the one Team GB spot in the Laser fleet continues.

For those with Team GB selection already in the bag, the regatta presents an opportunity not only to lay down a marker to rival crews but also to fine-tune certain aspects against world-class competition.

“It’s a tricky situation at the moment at this time of the Olympic cycle,” said Fletcher, 31, from Thames Ditton, Surrey. “Do we push for a world championship or do we focus on our goals for the Games? We think that if we work on our goals then we can win the World Championship.

“There aren’t actually many more opportunities after this to race in this strong a fleet so the focus is definitely on our processes. Whether we finish first or dead last it won’t matter to us if we are standing with an Olympic gold medal at the end of all of this.”

Gimson and Burnet (main image), the most recent addition to the Team GB sailing team and the only Brits in the Nacra 17 fleet, are using the opportunity to take stock and to try out a few new things ahead of their Olympic debuts.

“We are relieved first of all now selection is done,” said Gimson, 36, from Congleton, Cheshire. “We have some things to work on and now we have the opportunity to make some improvements before the Olympics and this is a great chance to try some things out.

“We would love to win the Worlds but we have a short timeline and a lot to get done so we have some different priorities to others.”

After finishing seventh at the 2019 World Championships, Dobson and Tidey are out to capitalise on their learnings from the regatta.

“It’s really difficult to peak for two big regattas on the bounce and we chose not to do that,” said Dobson, 33, from Rhu, Scotland. “We used the last Worlds in New Zealand as an opportunity to work on some things and we decided to put more influence on to this event so we are excited to crack on.”

If quiet optimism is the backdrop of Geelong, anticipation and excitement is front and centre for the Lasers across the water.

“It’s the one event of the year that motivates and inspires me more than any other,” said former world champion Nick Thompson, 33, from Lymington, Hants (below).

“I’m excited for the Worlds to start. Racing will be tough with the strong winds and flat water but I’m looking forward to the challenge.”

Both regattas begin with a qualifying series before gold fleet racing which culminates in a final day medal race on February 15 for the 49er, 49erFX and Nacra 17 and February 16 for the Lasers.

Later this month the Laser Radial and men’s and women’s RS:X fleets will compete for their world titles in Sandringham and Sorrento.