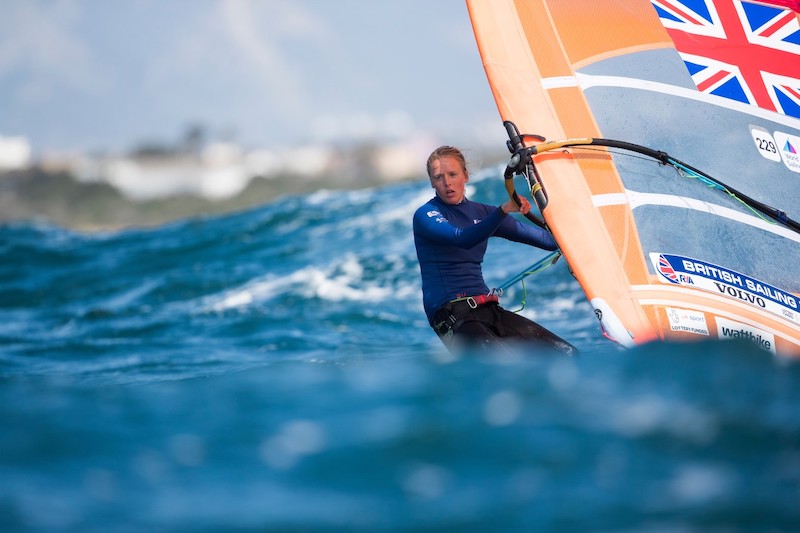 Team GB selected windsurfers Emma Wilson and Tom Squires will return to RS:X action this week at the European Championships in Vilamoura, Portugal, from 22-28 November following an eight-month break in major competition for the class.

The last major regatta for the British duo was back in February when they took on the RS:X World Championships in Sorrento, Australia, before COVID-19 impacted competition across the globe.

Wilson (pictured above) and Squires (pictured below) are aiming to get back into the racing groove as they look to make an impact at the delayed Tokyo 2020 Olympics, in what will be both their debut at a Games and the final outing for the class before it moves to foiling.

For 21-year-old Wilson, who will be joined on the Euros start line by team-mate Alysia Gibson, it is a chance to continue learning her craft and to check in on her rivals after such a long time apart.

“My goals for the event are just to try and perform as well as possible throughout the week and keep learning ahead of Tokyo,” said Wilson, from Christchurch, Dorset. “I think it will be a fun and interesting competition with everyone coming back together after a long summer in their own countries, so I’m looking forward to it.”

Just like her competition, Wilson trained at home, but she got to see the best of British solidarity as friends and training partners came together to keep on water time at a high level.

“Training has been going pretty well. I spent all summer in Weymouth enjoying my windsurfing, doing both some foiling and some RS:X. It’s a bit of an Olympic balancing act at the moment.

“We had a really nice group of people who came and helped out with some RS:X training which was really fun, and I am really grateful for, because with the foiling now on the cards for Paris 2024 not many people want to sail the RS:X.”

Competition will be tough with world and Olympic medallists like the Netherland’s Lilian De Geus and France’s Charline Picon in attendance, but Wilson is excited just to get a bit of action under her belt.

“I’ve been in Vilamoura now since the start of October training with a nice international group and I’m looking forward to the Europeans, fingers crossed it happens and we can finish this weird year with a regatta.”

In the men’s fleet, Tom Squires is ready to do battle after a long lay-off, but not before a quick reality check.

“I haven’t raced in eight months and no idea what to expect,” said the 27-year-old from Oxford. “I’ve just done a week of racing with the Spanish and Israeli teams, who have yet to choose their Olympic representatives so their teams are super strong at the moment and pushing for every metre.

“It was a shock to the system and the body but hopefully put me into that gritty racing mindset.”

Despite the shock Squires is looking to put in to practice some real positives from his summer training after reflecting on his enforced racing hiatus.

“To take a step back and come away from a summer with an actual outcome of weeks and weeks of specific training feels really good.”

Racing begins in Vilamoura on Tuesday 24 November and culminates in medal racing on Saturday 28 November.