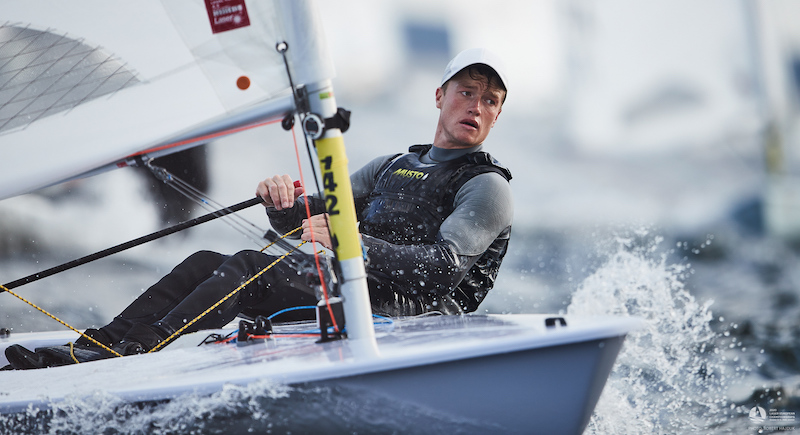 Team GB’s Elliot Hanson dedicated his Laser class European Championship victory to teammates Michael Beckett and Lorenzo Chiavarini – as all three filled the podium in a historic result for Britain.

Hanson (above), who will represent the country at the Tokyo 2020 Olympics, snuck past long-term leader and childhood friend Beckett in the penultimate race of the six-day regatta in Gdansk, Poland, to claim his first European title.

Beckett had to settle for silver, his second in three years, while Chiavarini signalled his return from a back injury that has kept him out of competition for nine months by claiming the bronze medal.

It is the first time ever that Britain has taken all three podium places at a major Laser class championship.

It is also the third time in four years that a British sailor has taken the European title – Rio 2016 sailor Nick Thompson won in 2017, while Chiavarini took the top spot last year.

Thompson has recently joined forces with veteran British Sailing Team coach Chris Gowers, and both were in Poland to enjoy the victory.

Hanson, who won silver at Kiel Week, the first post-COVID regatta, last month, went into the event vowing to end 2020 on a high.

He described standing on the podium next to his teammates, who all came through the UK Sport and Sport England-funded British Youth Sailing programme, as “a special moment”.

“To lock out the podium with two guys I’ve been best mates with since we were 11 years old is something really special, and something I will hold on to for a long time,” the 26-year-old from Macclesfield in Cheshire said.

“To have all three of us on the steps speaks volumes about the strength and depth of our squad. Enzo won last year, Thompo in 2017 and it’s really pleasing to win it myself this year. That said, if you’d have asked me this morning if I’d give up winning the event so that all three of us could be on the podium I’d have taken it. I wouldn’t have cared which one of us won.”

Beckett (above), 25, from Solva, Pembrokeshire, had led from early on in the regatta but a blip on the penultimate day allowed Hanson to close the gap.

He added: “The first four days of the regatta I felt like I could do no wrong, and then today we had building breeze and big waves, conditions I’m usually fine in, and I couldn’t get it right. But I’m so happy that the three of us are here on the podium, and with Thompo and Chris Gowers coaching us. We’ve definitely done something right this summer and I’m really excited about what’s to come.”

Chiavarini has been recovering from a back injury since December 2019, and had only managed six days back in his boat before the European Championships started.

But he signalled his intent on day one, opening his scorecard with two race wins to top the fleet.

Chiavarini slipped to fifth mid-regatta but clawed his way back to go into the final day in third. He ended the regatta tied on points with Filip Jurisic but secured third because he had scored more first place finishes than his Croatian rival, two to one.

“I’m over the moon, I couldn’t ask for more,” said the 26-year-old from Bellanoch Bay, Argyll. “I came into the event with six days’ training since returning from injury so it’s really unexpected but I couldn’t be happier. A big thanks goes to everyone in the British Sailing Team who’s helped me get back in the boat again.”

In the Radial fleet, Hannah Snellgrove (above middle) came home as top Brit in 18th place – a fantastic result on her return to action after a year out following knee surgery.

“I’m feeling really positive about the regatta and to be back racing and mixing it up with the front of the fleet after such a long injury lay off,” said Snellgrove, 30, from Lymington, Hants. “There were a couple of costly decisions in two of the gold fleet races but 18th is definitely a good start to the comeback and has given us a few clear work-on areas to address over the winter.”

Ali Young – who will join Hanson as part of Team GB in Tokyo – opted only to sail the opening two days of the regatta as a campaign decision. Daisy Collingridge was 38th while Matilda Nicholls was 69th.