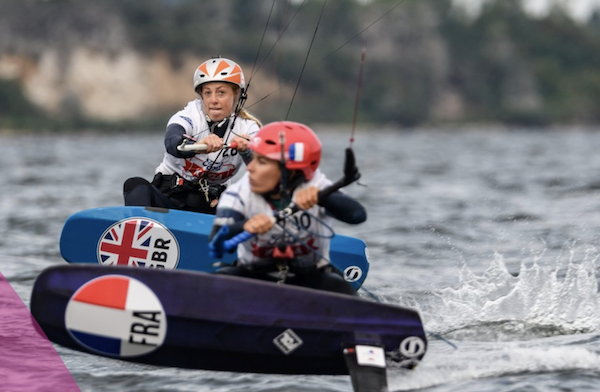 The two medal haul marked a successful return to international competition for the British Sailing Team following a six month gap due to the COVID-19 pandemic.

In what was a new format for the newest Olympic class set to make its debut at Paris 2024, riders had to navigate a tough semi-final process to join the top two from qualifying to fight for medals.

Aldridge, the defending European champion, finished qualifying in third place just missing out on a free pass to the final showdown and was joined by fellow Brits Jemima Crathorne and Maddy Anderson while Katie Dabson contested the other.

With just one spot advancing per semi-final the pressure was on.

“The semis were some of the most chaotic short course racing I’ve ever done,” said Aldridge, 23, from Poole, Dorset. “Six girls on the start line all hunting for a spot in the final. It was an absolute nightmare getting off the beach and not much better on the racecourse. I think everyone had their kites in the water at one point. It was pretty stressful, but I made it into the final.”

In the final Aldridge won the first two races to put her in contention for the overall win, but she was eventually beaten by Poland’s Julia Damasiewicz in a thrilling finale.

“The final race was so close. Everyone was swapping places until the last run where Julia overtook me to win the title. It was crazy. The most crazy, hectic, but exciting, day of racing I think I’ve ever had.”

Bainbridge began his week slowly and found it difficult to navigate a tricky racecourse laden with seaweed.

Down in tenth after the first day and rising to eighth on the second, Bainbridge steadily got back into the race flow and finished qualifying in sixth.

Bainbridge took his growing confidence through his semi-final and continued to the final race to take home what looked like an unlikely Euros medal.

“It’s an absolute shock to have medalled at the European championships,” said Bainbridge, 26, from Weymouth, Dorset. “I still can’t quite believe it. I had a really slow start to the regatta after having so much time off since my last event, but I managed to push hard towards the final series. I’m super happy to have come through the semis after some crazy close racing.”