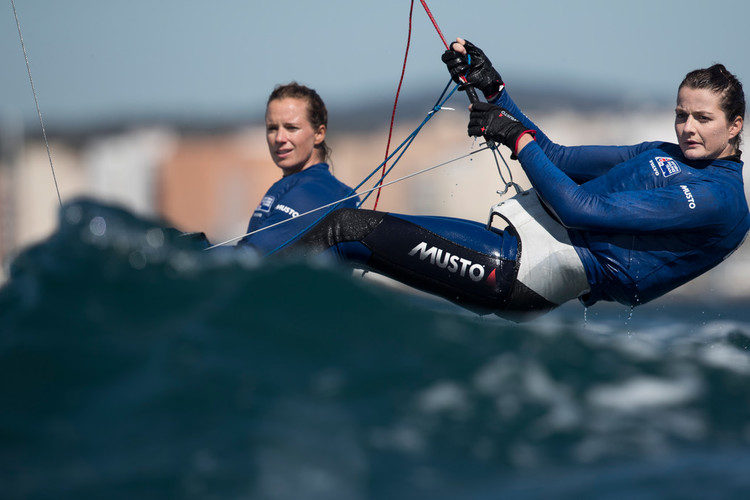 Mills and McIntyre (above in main image) will when they face off against the world’s best in San Remo, Italy, for the week-long competition buoyed by their recent victory at the Princess Sofia Trophy regatta in Palma, Mallorca.

The duo, who paired up in 2017, dominated racing in Palma in April and sealed the win by storming home ahead in the medal race, but are under no illusions about the challenge they will face in San Remo.

“We are really excited about the Europeans,” said Mills, from Cardiff, Wales. “The competition is going to be incredibly difficult with many countries using this event as part of their Olympic trials so no one will be giving an inch on the water.

“We will be going there to put down our best possible performance and will be putting pressure on ourselves to win. Practising this mentality before the Olympics is crucial experience for us as a team and the lessons we learn from events like this are hugely important in our journey to Tokyo 2020.”

Among those lining up in the stellar fleet will be French arch rivals Camille Lecointre and Aloise Retornaz, as well as Spanish threats Silvia Mas Depares and Patricia Cantero Reina.

Hayling Island’s McIntyre, whose father Michael won gold in the Star class at the 1988 Olympics, said she and Mills were preparing for all eventualities when racing gets underway on Thursday May 9.

“It’s supposed to be a tricky venue with classic light Mediterranean Sea breezes and some interesting chop, but you never really know what you’re going to get – it’s sailing after all. There’s no doubt in my mind that it will be a close regatta but looks like a wicked venue and we should have a good fight on our hands.”

Fellow Brits Amy Seabright and Anna Carpenter will look to bounce back from a tough start to the year with a strong result in San Remo.

“Missing Miami due to injury and then underperforming in Palma has been disappointing to say the least,” said Carpenter, “but we know what we are capable of and will do everything in our power to come away with a result we can be proud of at the Euros.”

The men’s fleet will be equally hotly contested, with London 2012 silver medallist Luke Patience on the hunt for another medal with crew Chris Grube after clinching bronze at Princess Sofia.

Fellow Brits Martin Wrigley and James Taylor are targeting a top-ten finish after a string of impressive results at recent regattas.

“The aim is to make the medal race which will be a good outcome for us as we have been working hard over the winter,” Taylor said. “It’s probably going to be one of the tougher competitions of the year with pretty much everyone turning up.

“We’ve spent a lot of time here over the past couple of years as our training base so we have good and bad memories. It’s where I broke my hand two months ago but it’s also where we’ve seen some of our biggest progressions in speed and racing.”