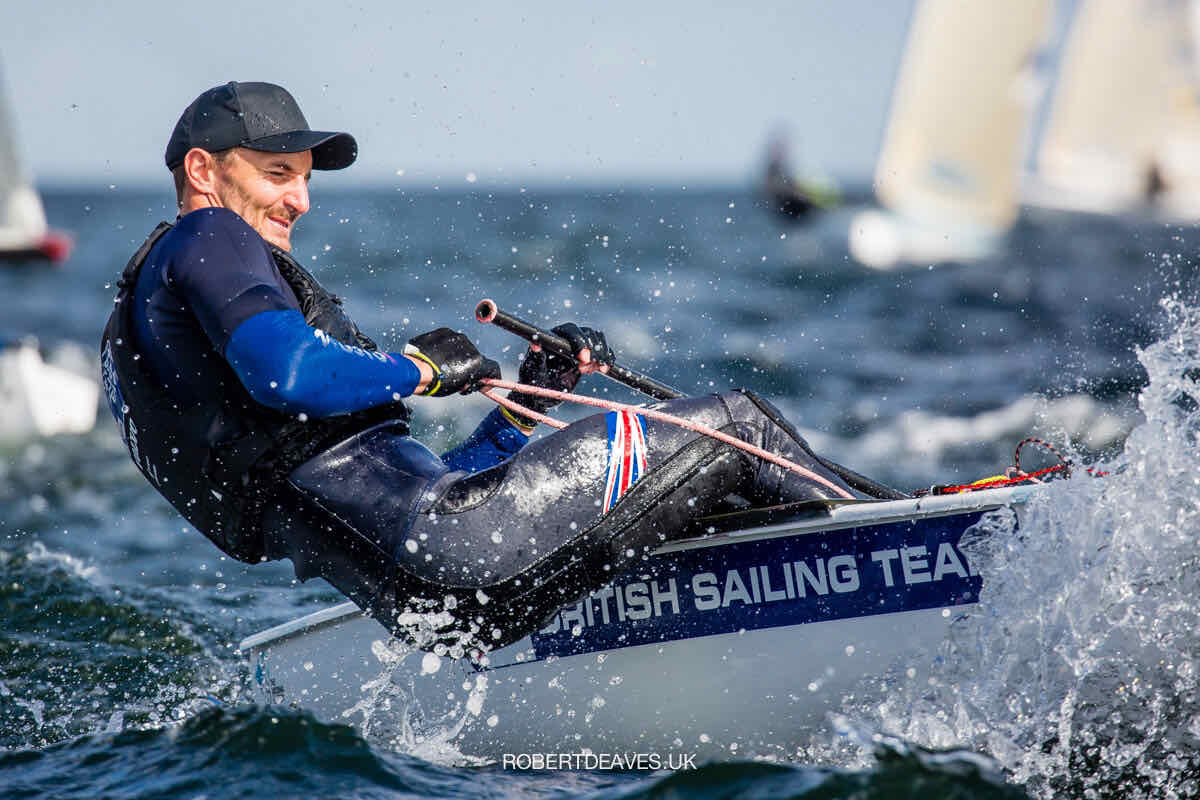 British Olympic champion Giles Scott says the Finn European Championship will provide a crucial performance benchmark as he returns to the Olympic circuit fresh from the America’s Cup.

The reigning Olympic champion put his Finn campaign on hold for six months to travel to New Zealand with Sir Ben Ainslie’s INEOS Team UK outfit, where they finished third.

But with just over three months until Tokyo 2020, his sights are now solely on defending his gold medal when racing gets underway in Enoshima on July 27.

Despite the hiatus, Scott will hit the start line among the favourites for a podium finish as racing at the Finn European Championship begins today in Vilamoura, Portugal.

Completing the three-boat British contingent will be Henry Wetherell, the 2017 under 23 European champion, and INEOS Team UK’s Ben Cornish who has stepped back into the Finn to aid Scott in his final preparations for Tokyo.

“It’s been good getting back in the Finn after such a long break,” said Scott, from Huntingdon, Cambs. “I’ve done a couple of weeks training now with great training partners – Henry Wetherell and Ben Cornish – and it’s been brilliant. The Euros will be the first line in the sand with how my form is going into the final months before the Games so it’s a big week or so ahead.

“For now, we’ve been focusing on trying to shake off all the rust and get myself back into a good place to race well. As well as my own performance it will be interesting to see how the form of my Olympic competitors is.”

With much Olympic class racing put on hold by the Covid-19 pandemic, the regatta will be the first time the Finn fleet has come together since the 2020 European Championships in Gdnyia, Poland, in September.

Wetherell narrowly missed out on the top 10 then – and after a long winter braving the cold to train in Weymouth Bay he’s chomping at the bit for some international action.

“Preparations for the Europeans have been a short build-up but I’ve had really productive training with Giles and Ben,” said Wetherell, from Snaith, East Yorks.

“With both of them having been away competing in the America’s Cup in New Zealand we have been playing a little bit of catch up after not getting the full winter behind us like most of the fleet. That said, I’m feeling fresh and raring to go after no Finn racing since the 2020 Europeans in September. The forecast looks like a mixed bag with plenty of opportunities – I can’t wait.”

Cornish’s return to the Finn comes after competing alongside Scott at INEOS Team UK for the past couple of years. A seasoned British Sailing Team athlete prior to his move to AC75s, Cornish said he’s enjoying the challenge of adapting back to Finn racing.

“I’m back in the Finn class lending a hand to Giles in his condensed build up for this summer’s Olympic Games,” said Cornish, from Budleigh Salterton, Devon. “We have a great training setup with three boats and Matt Howard coaching. It’s a dynamic which works well, and the end goal is success for Giles in Tokyo.

“I’ve been out of the boat since joining INEOS Team UK in 2018 and it’s fantastic to be back sailing the Finn. The boat is still hard work on the body and it’s fair to say I’m not in the shape I was before stepping away from the team.

“It’s a cracking fleet down here in Vilamoura and people are looking to find their best form into the Olympic summer. I’m enjoying being out here and trying to remember how things go!”

Racing begins today and will conclude on Saturday April 17. Follow the British Sailing Team’s social media channels for updates throughout the regatta.