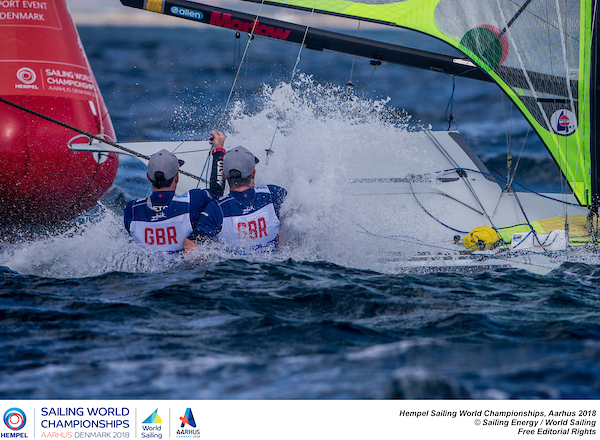 Olympic sailing: Great Britain has become the first and only nation to win spots in all ten Olympic sailing classes for Tokyo 2020 following strong performances at the 2018 Sailing World Championships.

The regatta in Aarhus, Denmark, was the first opportunity for nations to book their places at the upcoming Olympic Games, which begins in just under two years.

Forty percent of the total quota of Olympic sailing places for Tokyo 2020 were up for grabs at the quadrennial regatta, held in Aarhus, Denmark, which concluded on Sunday.

British Sailing Team athletes met the qualification criteria in every class, guaranteeing Britain the opportunity to defend its position at the top of the Olympic sailing medal table.

No other nation has qualified to compete in every event. They will have to earn their places at other qualification events over the coming year.

“In terms of guaranteeing that British sailors will be on the start line of every sailing event at Tokyo 2020, it’s job done,” said British Sailing Team boss Mark Robinson.

“The 2018 Sailing World Championships has been a great success for the British Sailing Team with our sailors making sure the nation is qualified in all ten classes – something no other country managed.

“Britain is the most successful Olympic sailing nation of all time and has topped the sailing medal table in four of the last five Games.

“With two years to go until Tokyo 2020, we can now turn our attention to perfecting our skills and processes so that we peak just at the right time.”

Wilson, 19, from Christchurch, went into the double-points medal race in fourth overall but a fantastic start saw her lead until the halfway mark – enough to shoot her onto the podium.

The three-time youth world champion (above) was then overhauled by Rio 2016 gold medallist Charline Picon of France, but more importantly her closest rival Yunxiu Lu of China moved up to seventh to jump back into third overall.

Wilson crossed the line in third behind Picon and China’s Hongmei Shi, while Lu held onto seventh to keep the Brit off the podium by three points.

“I’m happy and disappointed all at the same time,” said Wilson. “To finish fourth overall when I was winning the medal race hurts a little bit but I need to be happy with coming fourth in the world.

“I’d have easily taken that if someone had said it’s where I’d finish before the regatta. I gave it everything in every single race so I have no regrets. I’ll keep training hard, racing hard and giving 100 per cent, and that’s all I can do.”

In the men’s competition, Britain’s Kieran Holmes-Martin (below) rounded off his world championship bid with victory in the medal race but also ending the regatta in fourth overall.

“It was really tricky out there – I knew I had to go out there and win the race and for the guys in front of me to have a bad race,” said the 23-year-old from Cheadle, Staffs.

“I won, but unfortunately they did just enough to keep me off the podium. I’m happy with fourth in the world.”

Both Wilson’s and Holmes-Martin’s fourth-place finishes easily secure a nation place for Great Britain in the men’s and women’s windsurfing at Tokyo 2020.

The final medal race of the regatta was set to feature the mixed multihull Nacra 17 class, but it was called off after the wind disappeared.

As such, John Gimson and Anna Burnet finished eighth overall, with Ben Saxton and Nikki Boniface in tenth.

British sailors finished in the top ten in every class at the regatta, which featured more than 1,400 competitors from over 90 nations.

Hannah Mills and Eilidh McIntyre (top) won the first medal, securing bronze in the women’s 470 on Thursday, before Sophie Weguelin and Sophie Ainsworth matched it in the 49er FX class on Saturday.

The British Sailing Team will now look to solidify their position at the top of the world rankings at the first Olympic test event held at the Tokyo 2020 sailing venue Enoshima from September 9 to 16.