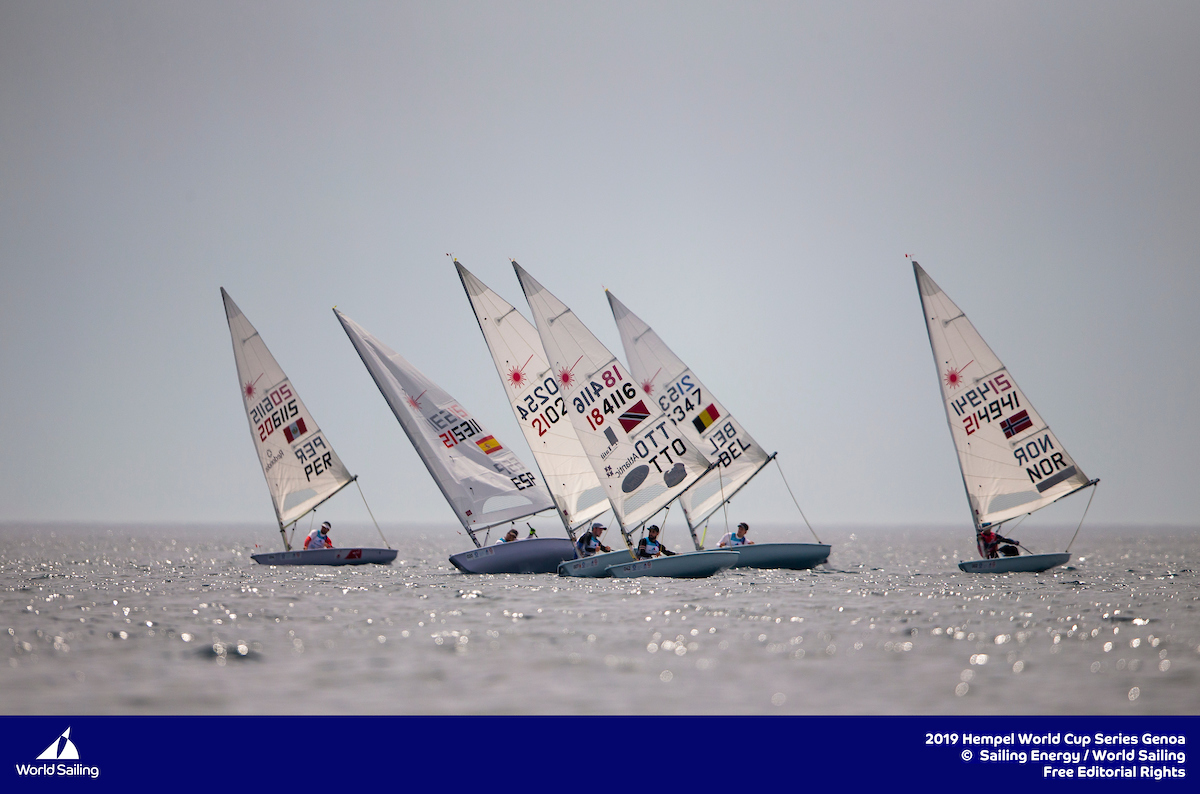 As I flew into Genoa Airport for the Hempel World Cup Series, I could see beneath me fleets of small dinghies waiting to race on a glassy Mediterranean Sea. Having raced the 470 here a couple of times at the Eurolymp Regatta, as the event was known back in the 1990s, I had experienced at first hand the frustrations of trying to sail in this light-airs corner of the Mediterranean.

I’ve also witnessed numerous conclusions of the Rolex Giraglia Race, which begins in St Tropez and takes the big boat fleet towards an increasingly windless climax in Genoa.

So it was no surprise to discover the lack of breeze this time around. Any hope for the typical regatta’s curse – “It’s not normally like this” – didn’t materialise. At least not until the day after the regatta had ended, when a warm, windy offshore breeze was blowing sufficiently strongly to tempt some local windsurfers out on to the water for a blast along the coast. So it turns out that – occasionally – wind can appear in Genoa after all. Just not when you need it.

Not that we didn’t have a wonderful time in Genoa. It’s a spectacularly, shambolically beautiful city with friendly people and wonderful, affordable food. The competitors had a good time on the shore, both in the city and in the marina area which was well equipped with food stalls and hangars so tall and cavernous that the Laser and 470s sailors could wheel their boats indoors without having to raise or lower their sails. Rigging heaven!

The race committee did a phenomenally good job of fitting in a series for all eight fleets (the RS:X windsurfers weren’t present for this one). This did entail getting up earlier than normal to catch the best of the morning breeze before it disappeared by noon, but no one was complaining. Sailors are a very patient bunch of athletes, who can always pick out the good side of any situation.

I heard a number of competitors say that Genoa had been really useful for working on their mental fortitude, the ability to wind yourself up for the start of a race, then to be able to switch off and relax in the face of a five-hour delay, then get your game face on again for a late afternoon race.

For some competitors, however, the event was mission critical. This was the first part of the Tokyo 2020 trials for the Dutch 49erFX girls for example.

The big No.1 on the sail of Annemiek Bekkering and Annette Duetz marks them out as the reigning World Champions after winning the 49erFX title in Aarhus last summer. So you might think they’d be a shoo-in for Games selection.

However, the girls with the almost-as-big No.6 on their mainsail – Odile van Aanholt and Marieke Jongens – had other ideas. This team is an intriguing combination of youth and experience. The 20-year-old van Aanholt won an emerging young talent award in the Netherlands a few months back, while 32-year-old Jongens is on her fourth Olympic campaign having previously competed in the 470.

The Dutch Federation had identified Genoa as a good light-airs test (well, they certainly got their money’s worth this year!), while the 49erFX Europeans at Weymouth serves as the second and final part of the Dutch trials.

The hope is that Weymouth will produce some moderate to breezy conditions to find the best all-round candidate to compete at Enoshima in the next year’s Olympic Regatta. The best aggregate score of Genoa and Weymouth will earn that team the right to represent the Netherlands in Japan, but the reigning World Champions have a mountain to climb after finishing 9th in Italy.

Provided van Aanholt and Jongens finish in the top 8 in Weymouth, the Olympic berth is theirs.

I’ll be in Weymouth as part of the commentary crew and I can’t wait to watch that battle unfold, along with the many other battles that we’ll see across the Men’s 49er and Nacra 17 fleets.