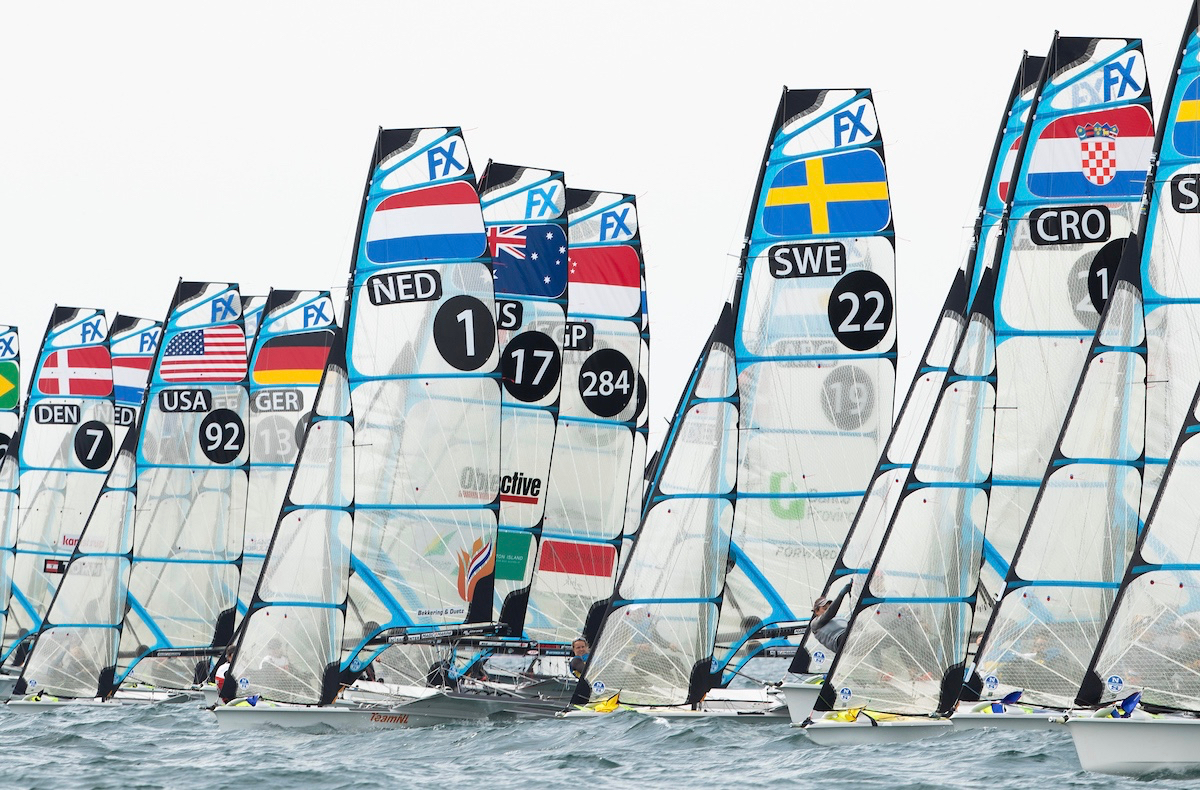 If performing under pressure is what the Olympic Games is all about, then the Dutch Federation’s bold – some would say foolhardy – approach to selecting its athletes has something to recommend it.

The Volvo European Championships – a combined event for the 49er, 49erFX and Nacra 17 fleets – was serving as the second and concluding regatta for the Dutch 49erFX trials. The first event was the ridiculously and all too predictably light airs venue of Genoa, the Italian leg of the Hempel World Cup Series.

At the Genoa event at the end of April, the 21-year-old Odile van Aanholt and her 32-year-old crew Marieke Jongens threw down the gauntlet by winning the drift-off regatta. Meanwhile the reigning World Champions Annemiek Bekkering and Annette Duetz could only manage ninth overall.

Not that this was a disgrace. The light and often very fluky conditions in Genoa meant brought some unusual names to the top of the leader board in many of the Olympic class fleets that week. The usually impeccably consistent Kiwi FX crew, former World Champions and Olympic silver medallists Alex Maloney and Molly Meech, didn’t even make the regatta’s medal race.

For some strange reason, a huge number of Olympic class regattas have been predominantly light for the past couple of years. So when the big breeze and rolling swells of Weymouth Bay kicked off last week’s seven-day regatta, it was a breath of fresh air for the sailors to be competing on the same waters that had delivered such a spectacular Olympic Regatta seven years earlier at London 2012.

Bekkering and Duetz made hay while the sun shone over Portland Harbour and battled away all week in the top three. And if they were to overcome the deficit from Genoa, the top three is where they would need to stay.

Any results outside the top 10 of either trials regatta didn’t accrue any points under the Dutch system, which perhaps was just as well for van Aanholt and Jongens who were unable to match their regatta-winning ways from Genoa on the more challenging seas of Weymouth Bay, or even the flatter water of Portland Harbour for that matter.

In the end the finished 23rd overall, nowhere close to making the Medal Race.

Speaking to Odile van Aanholt’s father before the medal race took place, he told me Marieke could barely bring herself to watch it, this having been her last opportunity to qualify for an Olympic Games after two previous campaigns in the 470. Whereas for the 21-year-old Odile, she would be able to cope with the emotion of win or lose, knowing she has a long career still ahead of her.

The gold medal had already been wrapped up by the FX Medal Race, the 2016 Olympic Champions Martine Grael and Kahena Kunze proving to be in a class of their own in Weymouth. Bekkering and Duetz went into the Medal Race in second overall, but with a whole pack of other nations breathing down their necks. 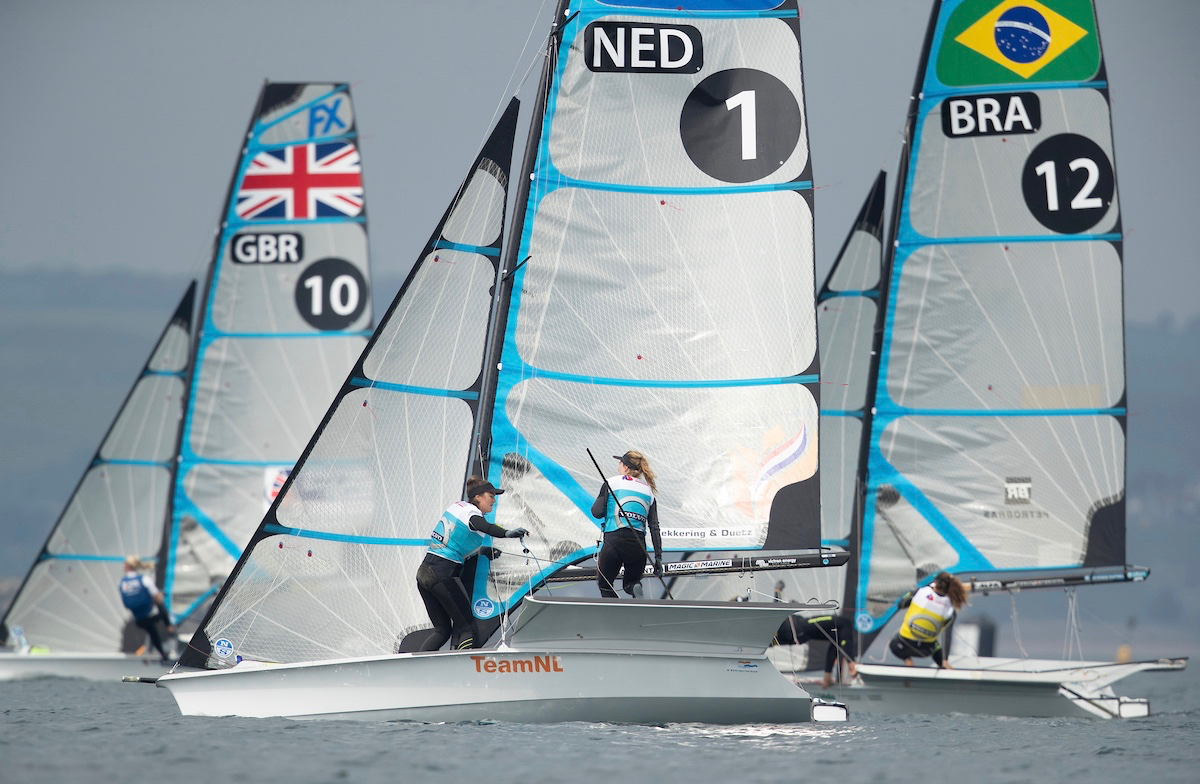 The best way to secure a place on the podium would be to go out and win the race. Easier said than done, especially now that the strong winds of earlier in the week had given way to barely sailable, fluky six knot breezes.

The Dutch pair worked hard to secure the pin end of the line, executed their strategy perfectly and accelerated off the left-hand end with the Brazilians on their hip. NED 1 sailed off into an early and seemingly commanding lead, although by the final windward mark had been caught out by the Norwegian crew who went on to win the race.

Even so, Bekkering and Duetz were second across the line and that secured them the silver medal behind the Brazilian gold medal winners. it seemed like the Dutch duo’s hugs at the finish line were not so much for becoming the top Europeans at the regatta, but more for surviving the pressure and nailing down their place for Tokyo 2020.

Few would argue that the 2018 World Champions are the stand-out Dutch crew and so the Dutch Federation will be relieved to be sending the best all-round performers to Tokyo, a venue that could deliver anything from light airs to big breeze and monster waves.

But with good reason other nations have long moved away from such a sudden death kind of scenario laid down by the Dutch system. There is an element of subjectivity and selection in other nations’ systems, whilst the Dutch approach is very transparent, perhaps too much so.

My co-commentator in Weymouth, Genny Tulloch from the USA, applauds the American system for its transparency, while our two guest commentators – Stevie Morrison (2007 49er World Champion) and Hannah Mills (470 silver and gold medallist from the last two Games) explained that the British system is deliberately designed to be opaque to the outside world, as the Royal Yachting Association doesn’t want other nations intentionally affecting the outcome of the British trials.

For instance, Grael and Kunze could have used the Weymouth medal race to put one or two loose or tight covers on Bekkering and Duetz and do just enough to knock the Dutch off the podium. That would have handed the Tokyo 2020 spot to the less proven team of van Aanholt and Jongens.

Not for one moment did the Brazilians look like it even crossed their mind to behave in such a Machiavellian manner, but such an aggressive move wouldn’t have been unprecedented had they chosen to take a harder line.

It was a great privilege to witness the Dutch pair’s impressive performance under pressure.

And I haven’t even mentioned the other stand-out performances at the regatta: the dominance of Burling and Tuke in the 49er, albeit the Kiwi legends (yes, I’d say legend status is justified – even before they’re 30 years old) were pushed hard by Great Britain’s Dylan Fletcher and Stuart Bithell on the final day.

The Brits also excelled in the Nacra 17 fleet, taking the top two spots ahead of a Danish crew, with the usually unstoppable Italians just missing on a medal after a six-way fight for the podium in the Nacra medal race.